Passion and tragedy in Rajasthan 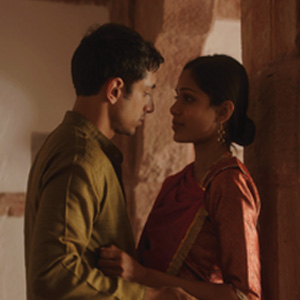 Following on the heels of The Best Exotic Marigold Hotel, a sleeper hit, is another British movie set in India that features Rajasthan’s hospitality industry—except, in Trishna, there are no dilapidated lodgings. Instead, much of the action takes place in majestic palace-turned-hotels. And it features the striking Freida Pinto rather than her boyfriend, Dev Patel, who had a role in the earlier film. Yes, Trishna also has Brits, although these sons of NRIs are young and brown, not old and white, and they have come to party, not retire, in the country their parents had left behind.

But one intense visitor, Jay (Riz Ahmed), is expected to remain in India and manage the hotel owned by his father (Roshan Sheth)—a prospect he doesn’t relish. A more enticing prospect for Jay is Trishna (Pinto), a lovely village girl who doesn’t succumb to cynicism and calculation when she gets involved with him. Hesitant at first, she is genuinely attracted to Jay—but not surprisingly, her journey from traditional rural India to modern urban India is bumpy. And it remains incomplete, with tragic consequences.

The film is not free of weak moments, such as when Trishna—who’s no dim-wit, though she starts off as a charming ingénue—makes some inexplicable choices even after Jay turns out to have a Jekyll-and-Hyde personality. Then again, strange are the workings of the human heart and mind! The film’s Jay is a composite of two characters in Thomas Hardy’s novel, Tess of the d’Urbervilles, which the director Michael Winterbottom adapted for his story. This quickens the pace, and makes the gory climax more shocking. With fine acting and nicely shot, realistic views of Rajasthan, the film remains engaging even when it’s not entirely believable. Rated R. In English and Hindi (with subtitles).