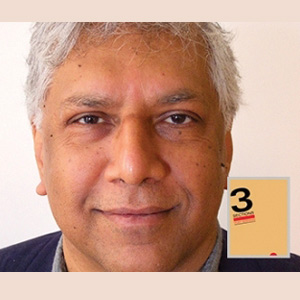 Vijay Seshadri, the first Asian to win the Pulitzer Prize in poetry, is not a typical Indian-American. He’s a major poet—but also, he came to the U.S. as a five-year-old in the late 1950s. The South Asian community back then was so tiny that there would have been few other children like him. That’s not all. The Bangalore-born Seshadri, whose family settled in Ohio, has worked in the Pacific Northwest’s logging and fishing industries. After studying literature and languages at Columbia, he went on to become a widely published poet, winning critical acclaim and honors such as the Bernard F. Conners Long Poem Prize and the James Laughlin Award.

Seshadri, whose collections include The Wild Kingdom and The Long Meadow, is a long-time contributor to The New Yorker. The Pulitzer committee recognized him for 3 Sections: Poems, published last year. In one poem, he writes: “Even though I’m an immigrant, / the angel with the flaming sword seems fine with me. / He unhooks the velvet rope. He ushers me into the club.”

Seshadri is the fifth Indian-American recipient of the Pulitzer Prize. Previous winners include the late Gobind Behari Lal—a science journalist who got the award back in 1937—and Geeta Anand, also a journalist, specializing in investigative reporting. In the non-journalism category, Jhumpa Lahiri has won for fiction (Interpreter of Maladies) and Siddhartha Mukherjee for general nonfiction (The Emperor of All Maladies)—an interesting coincidence when we look at the titles. For drama, though Rajiv Joseph was a finalist, Pakistani-American Ayad Akhtar did win for Disgraced. That leaves out music, history, and biography/autobiography. Keep watching.