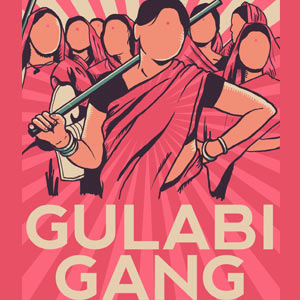 The Gulabi Gang (i.e., Pink Gang) hasn’t faded from public consciousness, though their story came out some years ago. In fact, there was a surge of interest recently. Gulaab Gang, a movie starring Madhuri Dixit and Juhi Chawla, was approved for release after the producers agreed to include a disclaimer saying it wasn’t based on the work of Sampat Pal Devi and her group of woman warriors. Not that many viewers would be convinced. In the real-life story, a bunch of hardy women in Bundelkhand, Uttar Pradesh, refused to quietly accept social injustice. Coming together as vigilantes and activists, they even adopted a distinctive brand for their band: pink saris. This unusual strategy in rural India worked, bringing wide attention and praise.

Nishtha Jain—whose documentaries include Lakshmi and Me, shown here on PBS—came out with the award-winning Gulabi Gang last year; earlier, Kim Longinotto made a film called Pink Saris. As for books, Amana Fontanella-Khan’s Pink Sari Revolution: A Tale of Women and Power in India, released here last year, received good reviews. Another book, published by Zubaan in India, is titled Warrior in a Pink Sari.

Coming back to the Bollywood version, it’s perhaps for the best that Gulaab Gang, as the film’s producers claimed, is unconnected to the Gulabi Gang. The movie reviews, not to mention the box-office performance, were disappointing. As the critic Anupama Chopra wrote in the Hindustan Times, “The result is an ineffectual and messy ode to women’s empowerment in which women, with nicely styled hair and handloom saris, maim, kill, fight elections, and in between find the time to sing and dance.”