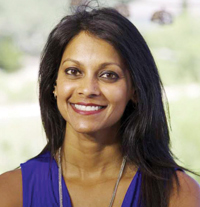 1. Mona Patel, one of 10 CNN Heroes in 2017, became known for her San Antonio Amputee Foundation, which has helped many amputees. She was just 17 in 1990 when a drunk driver hit her and she lost part of her leg. In 2015, Patel climbed Mt. Kilimanjaro, which is located where?
(A) Ethiopia (B) Kenya (C) Tanzania (D) Uganda

2. Radhika Jones is an editor based in New York. Her father, a notable folk musician from New England, is American, and her mother is from India. Which American monthly has Jones taken over as its sixth editor-in-chief? It’s one of the nation’s oldest and best-known magazines.
(A) Vanity Fair (B) Esquire (C) The Atlantic (D) Harper’s

4. Preet Didbal was elected as mayor of Yuba City, becoming the first Sikh woman to get that job in an American city. Yuba City has a thriving Sikh population, with many of them working in farming. Sikh migrants from India first settled there 110 years ago. Where’s Yuba City?
(A) Arizona (B) Washington (C) Oregon (D) California

5. Poet. Medical student. Painter. Kuchipudi dancer. These and other words describe Manushi Chhillar, who is Miss World 2017. The 21-year-old Haryana native is the 6th Indian to win the title. Which nation is tied with India for producing the most number of Miss World winners?
(A) U.S. (B) South Africa (C) Venezuela (D) U.K.

8. Kushanava Choudhury, in The Epic City: The World on the Streets of Calcutta (Bloomsbury), attempts to do for Kolkata what Suketu Mehta and Rana Dasgupta, in their respective books, did for the cities of Mumbai and Delhi. What’s the most densely populated city in India?
(A) Delhi (B) Mumbai (C) Kolkata (D) Chennai

9. Pakistani-American Arooba Ahmed and two other high school girls in New York (Jillian Parker and Jiachan Lee) shared the 2017 grand prize of $100,000 for identifying a protein that could play a role in cell division and certain diseases. Who hosted this STEM competition?
(A) Microsoft (B) Siemens (C) Google (D) Dupont

10. About 15.6 million Indians live abroad, constituting 6 percent of the world’s migrant population, according to a 2018 U.N. report. No other nation sends more migrants or gets more in remittances ($68.9 million). Which country after the U.A.E. has the most number of Indians?
(A) U.K. (B) Saudi Arabia (C) U.S. (D) Canada

KEEPING IT CLEAN AND CLASSY 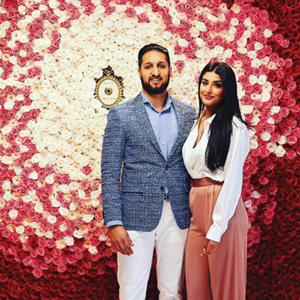 As a new year gets under way, what are some new gadgets that caught our eye? Perhaps the more pertinent question is: Are we ever going to get a break from gizmos and gimmicks? Of course, to be fair, manufacturers are in the business of making and hawking stuff. So it’s really up to us to decide what’s worth it. By that measure, in this age of allergies and air pollution, Molekule is a nifty product—if the $799 price tag doesn’t make your eyes water. Over two decades ago, prompted by his son’s respiratory ailments, Yogi Goswami looked for a new way to purify air. Dr. Goswami, who heads the Clean Energy Research Center at the University of South Florida, drew on his solar energy research to come up with PECO (photochemical oxidation), which works at the molecular level to remove pollutants indoors. The nanotechnology uses light-enabled chemical reactions to destroy pollutants that are a thousand times smaller than what HEPA filters can trap. Its coating prevents regrowth, but the $99 filter has to be replaced every year. CEO Dilip Goswami (son) and COO Jaya Rao (daughter) oversee Molekule, which Time magazine recently listed as one of “the best inventions solving everyday problems.” Also on the list: Bempu, an Indian-made electronic bracelet that detects hypothermia early.

Venus ET Fleur’s roses may not make you healthy, but they’ll make you happy. It all began during a courtship. Realizing that the bouquet Sunny Chadha had sent to Seema Bansal for Valentine’s Day could’ve been fresher and more artfully presented, the couple took the plunge…as entrepreneurs. They picked Ecuador as the source for their top-quality roses. The stylish bouquets, before being shipped to customers, are treated with a wax-based proprietary solution to keep them fresh for longer periods.

Yes, the couple continue to be romantic partners as well. 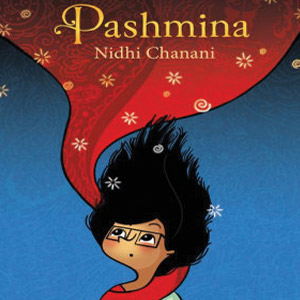 There’s been a 15 percent growth in graphic book sales over the last three years, according to NPD Bookscan. In 2016, for the first time, a graphic book (the third volume of the March trilogy, featuring Atlanta civil rights icon and U.S. Congressman John Lewis) won the National Book Award for young people’s literature. Graphic books have made inroads in India, too—unsurprising when you think of its youth boom and the pool of talented storytellers and illustrators. Publishers like Campfire, Graphic India, and Vimanika took the lead in bringing out attractive books with mass appeal. Case in point: Campfire’s recent Buddha: An Enlightened Life, written by Kieron Moore and illustrated by Rajesh Nagulakonda. Another title from them is Karna: Victory in Death, with Rik Hoskin as the author and Sachin Nagar as the illustrator.

Also recently, Nidhi Chanani’s Pashmina (First Second Books), a crisply drawn tale cooked in a pot that’s a mix of magic realism and multiculturalism, got a good reception. It was picked for several “top books of 2017” lists. Priyanka Das, whose mother is from Kolkata, grows up in the U.S. (just as the author did), but her father is out of the picture and he remains— like India—a mystery to Priyanka. What comes to her rescue is a magic scarf (or pashmina) that she finds in a suitcase. For younger readers, we have the inspiring Malala’s Magic Pencil (Little, Brown & Co.), an autobiographical story by the Pakistani-born Nobel laureate who turned 20 last year. The illustrations are by Kerascoët. And then there’s a documentary called Drawn Together: Comics, Diversity and Stereotypes by Harleen Singh, who has worked for the History Channel and the National Geographic Channel. In this debut film, Singh explores stereotypes through the eyes of Vish, a Sikh American known for his Captain America avatar, and two comic strip writers—one a woman of European descent and the other an African American man.

THE FUTURE IS HERE! 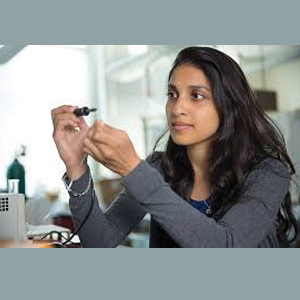 Judging by the work of some young researchers and entrepreneurs— all recognized by Forbes recently—the future is already here. Can we convert diesel emissions into paints and inks? Yes, say Arpit Dhupar and Kushagra Srivastava, founders of India-based Chakr Innovation. They came up with a product that can be retrofitted on diesel generators to capture over 90 percent of particulate matter (carbon, mostly), which is then processed for commercial use. Is it possible to create fertilizer from air? Karthish Manthiram of MIT is showing how with the help of solar energy and water, and he’s also making progress in the conversion of atmospheric carbon dioxide into fuel. What about using 3D bio-printers to build robots? Ritu Raman, a postdoc fellow at MIT, has found a way in her research on bio-synthetic systems.

We have solar cells that are a thousandth of a human hair, thanks to the materials research of UPenn’s Deep Jariwala. His work has advanced the development of nanometer and atomic scale devices with applications in computing and renewable energy. It was considered impossible for a radio to transmit and receive simultaneously at the same frequency—until Dinesh Bharadia of UC-San Diego built a radio that made it happen. And now we may see some benefits stemming from this technological breakthrough. Samir Lakhani, a 2017 CNN Hero, has shown how soap—actually, leftover soap—can save lives. While working for an NGO in Cambodia, he saw a woman bathing her child with cheap laundry detergent powder, which can be dangerous. The soap bars discarded by luxury hotels gave him an idea. With the help of scientist friends, he has produced recycled, hygienic eco-soap that’s used by hundreds of thousands of Cambodians. 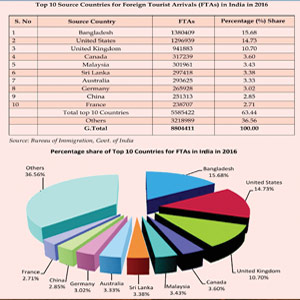 In one sense, the Indian tourism market is robust, ranking seventh in the world in terms of its contribution to the nation’s GDP. Moreover, it increased by 8.5 percent in 2016, making its tourism sector a growth leader among the G20 nations, according to the World Travel and Travel Council. But the driver is domestic tourism, which accounted for 88 percent of the sector’s GDP contribution in 2016. India drew 9 million foreign tourists that year, according to the World Tourism Organization, and its rank (40th) is far behind nations like China (4th) and Thailand (9th). South Asia on the whole saw an 8 percent growth, driven largely by Nepal (+40 percent), although India’s contribution (+10 percent) wasn’t negligible. The country also had close to 6 million NRI arrivals in 2016, bringing the total international arrivals in India to 15 million.

How’s India doing in the outbound tourism sector? Booming, in a nutshell. To give an example, over 1.3 million Indian visitors came to the U.S. in 2017, ranking 11th in terms of numbers for this country. But Indians tend to stay longer and on average spend more, making them 6th in the tourism export market ranking. About 28 percent of Indians come here because they have relatives and friends. While the main reason is business for 38 percent, it’s vacationing for 18 percent—and for 16 percent of Indian visitors here, other reasons like medical care take precedence. The average Indian traveler going abroad spends $12,000 per visit.