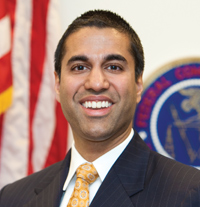 1. Many Indian-Americans are unhappy with the Trump administration. But some are pleased because Nikki Haley, Seema Verma, and Ajit Pai have been appointed to high-level posts. Harmeet Dhillon and Amul Thapar may be next. Which Federal Commission does Pai head?
A) FTC-‘Trade’ (B) FEC-‘Election’ (C) FCC-‘Communications’ (D) FMC-‘Maritime’

2. Responding to incidents of sexual harassment on board, Air India announced this year that it would reserve six seats in the front rows for women traveling alone. Seen as necessary by some, the move generated controversy. How many other national airlines have this gender segregation?
(A) None (B) Five (C) Six (D) Two

3. Seema Verma is the new chief of the Centers for Medicare and Medicaid Services (CMS), a federal agency that oversees health standards and is involved with the health coverage of over 100 million Americans. With a staff of about 4,100 employees, where is it headquartered?
(A) Baltimore (B) New York (C) Washington, D.C. (D) Boston

4. Stanford was ranked as the top university for educating students who set up billion-dollar startups (unicorns), according to U.K.-based Sage. They founded 51 startups, followed by Harvard (37) and the University of California (18). Which university came next (12 startups)?
(A) MIT (B) University of Oxford (C) IIT (D) Tel Aviv University

5. Chaitanya Karamchedu, an Oregon teen, found highly absorbent polymer cost-effective in removing salt from sea water. He won $10,000 from the U.S. Agency for Intl. Development and second place at MIT’s TechCon. Which nation does the most desalination of sea water?
(A) U.S. (B) Israel (C) Russia (D) Saudi Arabia

6. In a recent survey of 250 American universities, almost 40 percent of the institutions reported a decline in applications from foreign students. This trend may continue, given the political climate. In the last academic year, which nation sent the most number of students to the U.S.?
(A) India (B) China (C) South Korea (D) Canada

7. Gauri Nanda, who co-founded Toymail with Audry Hill (Khabar, April 2014), appeared on Shark Tank this year and received a $600,000 investment offer for 5 percent. Toymail lets kids communicate with others without using a phone. On which channel does Shark Tank appear?
(A) CBS (B) FOX (C) NBC (D) ABC

8. India has been the world’s largest importer of weapons for the last five years, accounting for 13 percent of the global imports between 2012 and 2016, according to the Stockholm International Peace Research Institute (SIPRI). Which nation is the second biggest importer?
(A) U.A.E. (B) Saudi Arabia (C) Pakistan (D) China

9. Cellist Yo-Yo Ma’s Silk Road Ensemble is made up of diverse musicians. Their Sing Me Home, featuring the tabla player Sandeep Das among others, won the 2017 Grammy Award for Best World Music Album. How many solo Grammys did Ravi Shankar win in this category?
(A) One (B) Two (C) Three (D) Four 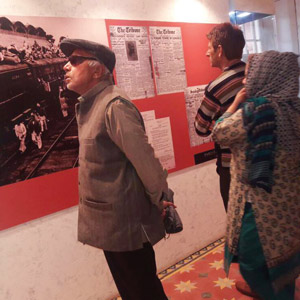 Seven decades ago, a bloody dismemberment of the Indian subcontinent resulted in the death of a million people and the displacement of about 14 million. A Partition Museum, the first of its kind in the subcontinent, opened in Amritsar last year. And this summer, at the Manchester International Festival, Sharmeen Obaid-Chinoy—winner of two Oscars for documentaries—will showcase Home1947, a film installation focusing on the families affected by Partition. In this country, we have the 1947 Partition Archive, founded and headed by Dr. Guneeta Singh Bhalla, a former physicist. Both in the archive and at the museum, you’ll find oral histories, films, books and documents, photographs, and other digital resources.

Then there is Gurinder Chadha’s new film, Viceroy’s House, which takes us back to the traumatic last days of the British Raj. Chadha has said that she’d donate the costumes used in the film to the Amritsar museum. Looking back, well-known Partition films include Deepa Mehta’s Earth (’90s), Govind Nihalani’s Tamas (’80s), and M. S. Sathyu’s Garam Hawa (’70s). A decade ago, we had Vic Sarin’s Partition.

Viceroy’s House gives us the perspective of the hastily withdrawing colonialists. That didn’t sit well with commentators who thought Lord Mountbatten, the last Viceroy, got an easy pass in the drama. While some relished the film’s Jewel in the Crown pageantry, coupled with the sahib-servant story, others found it soapy or grating. Chadha did win praise for drawing on secret government documents, released only two decades ago, that showed how the departing British were concerned, above all, with safeguarding their interests—and how their plan for Partition had been hatched much earlier than publicly known. The subcontinent’s division, incompetently handled, was messy and tragic, with long-lasting consequences, as authors Jon Wilson (The Chaos of Empire, 2016) and Shashi Tharoor (Inglorious Empire, 2017) would doubtless agree. 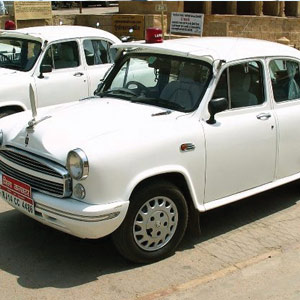 Alas, fans of the Ambassador car won’t be marking its 60th anniversary next year. Hindustan Motors has sold this most recognizable of Indian brands to Peugeot, the French automaker, for just $12 million. Affectionately dubbed the Amby, this graceless but sturdy car ruled the Indian roads for decades. In a more socialist and less affluent era, before superhighways were built, it was seen as the ideal, shock-absorbing vehicle on India’s iffy roads. Some found the car embarrassing. But even as the economy improved—and people began abandoning the Amby to embrace the Maruti and, later on, other sleeker models that flooded the market—the unassuming, boxy Amby retained the loyalty of government officials and taxiwallas for a while.

The Amby’s heyday was in the ’80s, and by the early years of this century, it had fallen on hard times, looking increasingly unfashionable among the latest models. Perversely, that only made it more endearing to die-hard fans who valued the Amby for, in the words of author Jerry Pinto, “its solidity, its dependability, its spaciousness, and its high chassis.” The company, though, was bleeding money, forcing it to shut down production in 2014. Demand was so low by then that only 2,200 cars were rolled out in the last year. So, will there be a new chapter for the Amby, whose inspiration—the Morris Oxford—can be traced back to the U.K.? Probably not. But even if there isn’t another incarnation, the Amby will live on in the fond memories of aficionados. 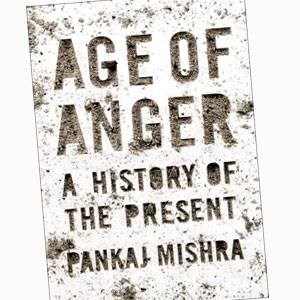 Why did the Anglo-American world change course so drastically last year? In a populist revolt that few saw coming, a demagogue became the world’s most powerful leader, and across the Atlantic, Britain initiated a nasty divorce from the EU. Ethnic nationalism, promoted by the far right—and fueled by migration, economic anxiety, terrorism, weak institutions—is on the rise, creating instability. The formidably well-read Pankaj Mishra, in his timely Age of Anger (Farrar, Straus and Giroux), sheds lights on it, although what we have here is an oblique “history of the present.” He’s interested in the roots and evolution of that anger (or ressentiment), taking us back to the Age of Rousseau and the birth of modernity. At times you miss the Mishra of his earlier work, in which he maintained a lively presence as an acutely observant traveler-narrator. But a patient reader of this book, which is a little denser, will glean fresh—and provocative—insights. While Mishra’s analysis of “the unprecedented political, economic, and social disorder that accompanied the rise of the industrial capitalist economy” is compelling, he sometimes undersells the benefits of the world we inherited. And terrorism, surely, is not only about dysfunctional modernity; it has much to do with the atavistic beliefs of the premodern world.

Mishra, though, is spot on when he gets to the contradictions of a brutal, unfettered neoliberal system that creates winners and losers, noting how “there has been an exponential rise in tribalist hatred of minorities, the main pathology of scapegoating released by political and economic shocks, even as the world is knit more closely by globalization.” We all need to examine ourselves, because “the global civil war is also a deeply intimate event.” Vast disparities, if unchecked, have consequences—especially when safety nets shrink, along with communities and families.

Mishra zeroes in on the damage caused by such heartless “progress.” 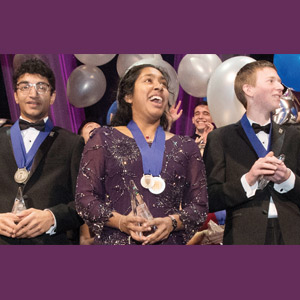 Of the 40 finalists who made it to the Intel Science Talent Search last year, 33 were children of immigrants. “Moreover,” notes Stuart Anderson of the National Foundation for American Policy, “75 percent—30 out of 40—of the finalists had parents who worked in America on H-1B visas.” This is ironic indeed in the current political environment, where the crackdown on immigrants has caused alarm and the call for restrictions extends to high-skilled immigration. Children of immigrants got 7 out of the top 9 awards at last year’s contest, which had 14 finalists whose parents were born in India. That made Indian-Americans the leading contenders. What’s also noteworthy, given the proposed cutbacks, is that 27 of these 40 finalists have parents who had studied in the U.S. as international students before obtaining H-1B visas.

Intel has passed on the baton to Regeneron for the Science Talent Search. And the top prize in its inaugural contest goes to…yes, a child of immigrants. Indrani Das, a 17-year-old from New Jersey, won $250,000 for figuring out a possible method to treat the loss of neurons caused by neurodegenerative diseases or brain disease. The second prize ($175,000) went to Aaron Yeiser and the third prize ($150,000) went to Arjun Ramani. The 18-year-olds are from Pennsylvania and Indiana, respectively, and they both focused on math, with Arjun linking computer programming and graph theory to address questions involving networks. Archana Verma (5th place), Prathik Naidu (7th place), and Vrinda Madan (9th place) were also in the top 10. The contest’s sponsor has changed, but the trend continues.