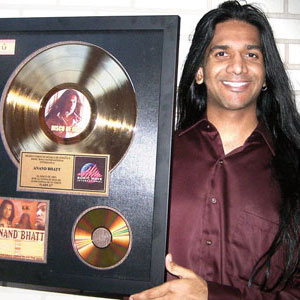 Growing up in suburban Chicago wasn’t a pleasant experience for Anand Bhatt. He endured racial abuse and not-so-subtle attempts at conversion to Christianity.

But those rough days are far behind for this rock musician. Bhatt was the first Indian American to be inducted into the Latin Academy of Recording Arts & Sciences. And in November last year, he reached Triple Platinum status in Sweden. He’s also making waves in other Scandinavian countries—Finland and Norway, mainly—and in Spain. Before striking out on his own, Bhatt, who has appeared on E! and CNN, was a front man for the band Anand Clique. Andy Bott would have been a more convenient name than Anand Bhatt: it would have smoothed his passage in the world of popular culture. However, unlike some other South Asian Americans, Bhatt didn’t see the need to change or “simplify” his name.

Bhatt recently came out with a cookbook titled Rock Star Recipes. As a musician constantly on the road, it wasn’t easy for him to eat and stay healthy. Knowing that other rockers were in the same situation, he decided to offer creative road recipes that are simple rather than involved, and tasty rather than boring. Two of Bhatt’s hits are his fast and easy masala chai and a cauliflower-crust pizza.