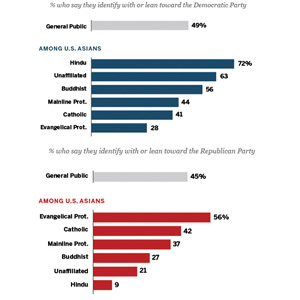 Contrary to popular belief, only 39 percent of Indian-Americans identified with the Democratic Party, according to a survey. And this was in 2008 (could be lower now). However, it doesn’t mean the GOP has a lot to cheer about. Just 9 percent of Indian-Americans identified with the Republican Party back then, with the rest being independents or unaffiliated. The difference was starker when it came to the 2008 presidential election. A stunning 84 percent of the community supported Obama—and even now, as per a Pew survey released in June, 65 percent approve his handling of the presidency. No wonder most of the Indian-American Congressional candidates this year are Democrats. But it’s a long shot. Besides Democrat Dalip Singh Saund, only one Indian-American has made it to Congress so far: Republican Bobby Jindal.

On the 2012 GOP ticket, we have Ricky Gill from California. The Democrats have four contenders: Upendra Chivukula from New Jersey, Manan Trivedi from Pennsylvania, Syed Taj from Michigan, and Ami Bera from California. A fifth one, Tulsi Gabbard from Hawaii, is a practicing Hindu, though she’s not of Indian origin.

While it’s unlikely other Indian-Americans will join Jindal in Congress anytime soon, here’s some encouraging news for the community: its electorate jumped by 100 percent in a decade, going from 576,000 in 2000 to 1.15 million in 2010, according to census figures. From 1.9 million in 2000, the Indian-American population increased by 68 percent to reach 3.19 million in 2010. That bodes well for its future involvement in American politics.