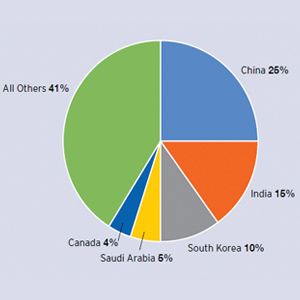 India accounts for four of the top 10 source cities among foreign students pursuing STEM (Science, Technology, Engineering, and Math) in the U.S. This is according to a recent Brookings Institution report focusing on the years 2008 to 2012. Hyderabad came in first, accounting for 20,840 student visas in STEM, followed by Beijing, Seoul, and Shanghai. Mumbai, Chennai, and Bangalore were also in the top 10, along with two cities in Saudi Arabia and one in Taiwan. India accounts for eight of the 10 origin cities with the highest proportion of their U.S.-based students pursuing STEM. Among the top metropolitan destinations for foreign students in the U.S., New York-Newark-Edison ranked first, followed by Los Angeles-Long Beach-Santa Ana and Boston-Cambridge-Quincy. Atlanta-Sandy Springs-Marietta was number 11. India accounted for 15 percent of the foreign student population in this country, with only China exceeding that number.