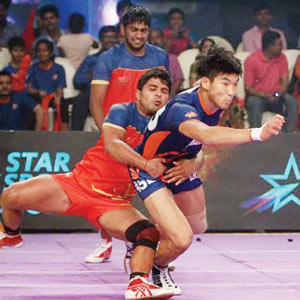 India’s first Pro Kabaddi League tournament, featuring eight teams that included four Korean and other foreign players, was a success, with only the Indian Premier League drawing more viewers. In the final, which attracted over 86 million viewers, Jaipur Pink Panthers beat U Mumba. The other PKL teams are Bengal Warriors, Bengaluru Bulls, Dabang Delhi, Patna Pirates, Puneri Paltan, and Telugu Titans. Kabaddi may not have the reach of cricket, and PKL may not have the glamour quotient of IPL, but it is gaining ground; in fact, Jaipur Pink Panthers is owned by the film star Abhishek Bachchan. Launched by Star Sports, PKL was clearly inspired by IPL, which probably accounts for the presence of foreign players. PKL players also came from Japan, Pakistan, Kenya, Turkmenistan, Iran, and England. Korean Lee Jang-kun, with a score of 55 points, is one of PKL’s most popular players, according to media reports. Does it mean this Made-in-India sport is gaining a foothold outside the country? Well, going by one source, the city of Saitama in Japan is already a hotspot for Kabaddi.