COVID-19  In-depth info for Indians in Atlanta/Georgia. Click here
Home > Magazine > Desi World > How to Watch the Action in Bollywood

How to Watch the Action in Bollywood 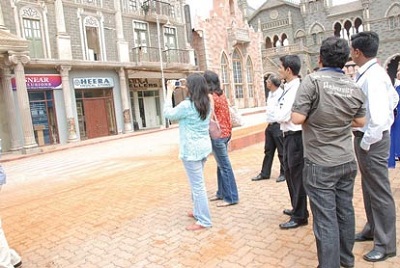 Lights. Camera. Action. And the location? How about Mumbai? If you’re a Bollywood fan, and have plans to visit India, here’s the best way to watch a film shooting in Mumbai: become an extra.

It’s not so easy for Indians because of the competition. Foreigners, on the other hand, can often show up at the right place at the right time, say some ex-extras. “You get all the way inside a production,” notes Virginia on a TripAdvisor forum. “Some production always needs non-Indians (supposing you are one!!) to hang around in the background in scenes that are supposed to be in foreign countries but are really shot on sets in Film City.”

But Indians, too, can watch a film shooting in Mumbai without having to finagle an invitation. Unlike earlier days, when luck played a role, there are now a few organized tours—for a fee, of course. Bollywood Tourism, for instance, offers two packages to visitors. The full-day tour, costing $150, includes stops at ND Studios and Killick Nixon Studio, where soap operas are made. There is a stop for lunch and, most likely, you will get to watch a live film shooting. It gets interactive at Anupam Kher’s Actor Prepares, where you can don costumes and learn to dance the Bollywood way, or test your acting skills.

Bollywood Tourism also has tie-ups with Balaji Telefilms and Whistling Woods International, which focuses on the technical aspects of filmmaking. What if you want to star in your own movie, rather than watch one being made or try to be an extra in somebody else’s production? Well, that can be easily arranged. Bollywood Tourism will shoot the film and make a DVD for you. Just be prepared to give them more money.