WHO WHAT WHERE WHEN WHY, PODCASTS, INDIA’S NATIVE SPORTS, BOOK MATTERS 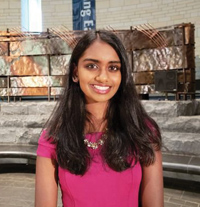 Kavya Kopparapu, 19, won the 2019 National STEM Education Award for an invention called GlioVision. The Harvard University freshman from Virginia gets $10,000 for developing an AI-enabled method that, at a lower cost than traditional methods, checks brain tumors for cancer using a scanned biopsy image. She also founded a nonprofit called Girls Computing League.

The 2019 Sloan Healthcare Innovations Prize went to the founders of Umbulizer, a low-cost ventilator for patients with respiratory issues. Led by Shaheer Piracha and Sanchay Gupta, the winning team receives $20,000 from MIT to develop a product that’s expected to cost no more than $2,000. The ventilators currently available are not affordable in many developing nations.

In the 2019 Regeneron Science Talent Search (STEM competition), Adam Ardeishar, 17, won third place and $150,000 for his mathematical work on predicting the likelihood of a maximal event. By integrating the “coupon collector problem” with extreme value theory, the high school senior came up with a way to figure out the average maximum values of distributional sets.

While Ardeishar lives in Virginia, Eshika Saxena is a high school senior from Washington state. In the 2019 Regeneron Science Talent Search, Eshika won 10th place and $40,000 for developing a 3D-printed smartphone attachment and AI software to automatically identify blood diseases. Altogether, $3.1 million in prizes was distributed to the winners of this year’s contest.

In a breakthrough for South Asian comedians, not to mention female comedians, Indian- Canadian Lilly Singh has landed a late night gig on American TV. Singh, a YouTube phenom with a vast following, will replace Carson Daly as the host of an NBC talk show airing at 1:35 a.m. The half-hour program, to debut later this year, will be called A Little Late with Lilly Singh.

Satheesh Reddy, a leading architect of India’s advanced missile technologies and smart guided weapons, is a co-recipient (with Rondell Wilson) of the 2019 Missile Systems Award from the American Institute of Aeronautics and Astronautics. Reddy is a scientific advisor to India’s Defence Minister and chairman of Defence Research and Development Organization (DRDO).

Lydian Nadhaswaram, 13, could become the next A. R. Rahman. Dubbed the Mini Maestro, Lydian is this year’s season one winner of The World’s Best talent show on CBS. The Chennai-based prodigy, a multi-instrumentalist, walked away with $1 million in prize money. No wonder Rahman, who has coached Lydian, thinks he could become “India’s musical ambassador.”

Neomi Rao, a conservative judge who had to apologize for her controversial writing on date rape in her columns as an undergraduate at Yale University, has been confirmed to the U.S. Court of Appeals for the D.C. Circuit. Following a contentious hearing, she was confirmed by a margin of 53-to-46 votes. Rao will replace Brett Kavanaugh, who now serves on the U.S. Supreme Court.

If word-filled novels can be made into films, why not graphic books? Given the visual element, graphic works seem ideal for film adaptations. Reportedly, filmmakers Gurinder Chadha and Ashok Amritraj are joining forces to adapt Nidhi Chanani’s widely praised Pashmina, a graphic novel in which an Indian-American girl searching for her roots is magically transported to India. 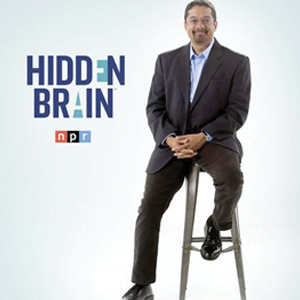 The reach of podcasts is wide, extending beyond digitally savvy millennials. Apple, which owns 60 percent of podcast consumption here, put out its top 25 list for 2018. The Daily and The Joe Rogan Experience were downloaded the most. Understandable, perhaps, given that comedy is always king. But just below them, you’ll see serious podcasts like NPR’s Fresh Air, This American Life, and Planet Money. And ranked at 21, you’ll find Shankar Vedantam’s Hidden Brain. In The Atlantic’s “50 Best Podcasts of 2018,” Hrishikesh Hirway’s Song Exploder is listed at 24. “Beyond the intro and credits, you rarely hear Hirway’s voice; the show is all about the artist and the music, giving diehard fans precious insights into their favorite songs and making fans out of skeptics,” the magazine notes. In case anybody is wondering, Song Exploder, now in its fifth year, has nothing to do with Bollywood; Hirway, the son of Indian immigrants, focuses on Western popular music. As for Vedantam, who grew up in India, his Hidden Brain podcast combines science with storytelling to give us insights into human behaviors and show how beliefs and biases beyond our control influence the choices we make and the roads we take.

In India, too, there’s been an uptick in podcast consumption. Going back to Apple, Maed in India tops the list. Again, songs are analyzed and artists interviewed, but for Mae Mariyam Thomas, the podcast host, the focus is very much on India’s indie music scene. Comedy lovers will enjoy All India Bakchod, while movie buffs will like The Bollywood Project. Other Indian podcasts include 3 Things (currents affairs), The Taste of India (cuisine), #AakashVani (cricket), Audiogyan (art), and Baalgatha (for kids). 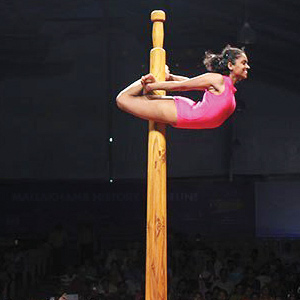 Cricket draws much attention in India, but so does kabaddi. The latter, though little known in the West, is widely played and is—like kho-kho—native to India. Both these sports may become more popular, thanks to greater international recognition. In 2018, the Olympic Council of Asia decided to include kho-kho in the Asian Indoor Games, and it may even make it to the next Asian Games if there’s enough acceptance. Meanwhile, the inaugural World Cup kabaddi tournament is being held this month in Melaka, Malaysia. Hosted by the Malaysian Kabaddi Federation, this is no small event. Over 1,000 players, both male and female, are converging from 40 nations to participate in about 146 matches. There’s an active kabaddi league in India, and even Bangladesh has embraced it as a national sport. A team has seven players, each of whom takes a turn to cross the center line and tag the opposing members without getting tackled or losing his or her breath. A challenging goal, to be sure. Kho-kho is a tag sport as well, except that all 12 members of a team are playing at the same time, with nine on offense and the other three on defense.

Mallakhamb, another fascinating indigenous sport, was in the news recently. Commonly known as “Yoga on a Pole,” it is as difficult as it looks, making extraordinary demands on the supple practitioners who twist their bodies into intricate positions as they perform yogic routines on a 8.5-foot pole that narrows at the top. In February this year, Mumbai hosted the first Mallakhamb World Championship. The two-day event attracted about 100 participants from 15 nations, including the U.S., Germany, Japan, Iran, and the Czech Republic. India won first place, overall, followed by Singapore and Malaysia. 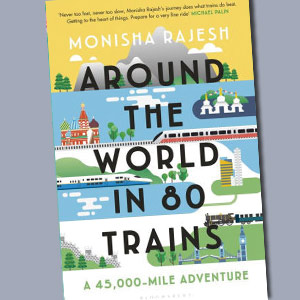 In Around the World in 80 Trains (Bloomsbury), Monisha Rajesh is back to take readers on “a 45,000-mile adventure.” Rail buffs who enjoyed her rollicking Around India in 80 Trains will discover that she didn’t return to India for another ride, although the British-Indian author did go to Tibet. And her ambitious journey also took her to, among other places, Russia, parts of Europe, and China. Earlier, having said goodbye to trains after her exhausting 25,000-mile trip across India, Rajesh had decided to lead a quiet life as The Week magazine’s subeditor in London. But that didn’t last. She couldn’t ignore the rail bug she’d picked up, and the only cure to her “sickness” was to get back on the train. “Nowhere in the world could rival India’s railways,” she writes, before pointing out that every country’s network possesses a spirit that can be unearthed by a patient traveler. “Trains are rolling libraries of information, and all it takes is to reach out to passengers to bind together their tales.” 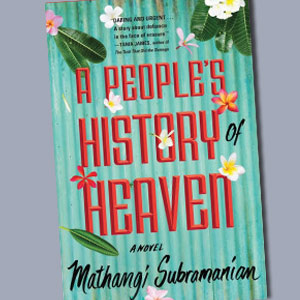 A People’s History of Heaven (Algonquin), Mathangi Subramanian’s debut novel for adults, is set in Heaven, a three-decade-old slum in Bangalore. The story centers on five girls (call them the Fierce Five rather than the Famous Five) of differing faiths and sexual orientation. What they share, besides their deep friendship, is an unshakeable determination to prevent the demolition of Heaven, their home, by a city government that’s eager to clear the land for a glitzy mall. “Slum life is never romanticized,” according to Foreword Reviews. “The narrator, an unnamed member of the girls’ inner circle, delivers enough cynical wisdom and pithy commentary to show just how wise these girls are to their plight without dismissing how insidious cultural messages are.” Subramanian is a former public school teacher and senior policy analyst for the New York City Council, and she worked as an assistant VP at Sesame Workshop. Currently based in India, she’s also the author of Dear Mrs. Naidu, which won the U.S.-based South Asia Book Award in 2016. 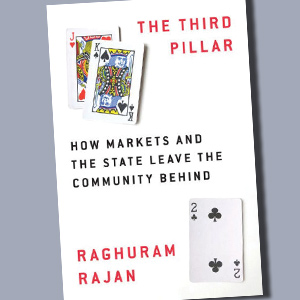 In The Third Pillar: How Markets and the State Leave the Community Behind (Penguin), Raghuram Rajan attempts to tackle head-on an issue that’s roiling many countries: the populist backlash against globalization. Rapid technological change has made the state and markets stronger. But the consequences—political disruption, radicalism, economic instability—have been huge. Inequality has risen, alienation has grown, and fissures in the society have turned into fractures, creating “us” and “them,” winners and losers. That’s where our third pillar, community, can provide the balance we desperately need, Rajan argues. “Localism—in the sense of centering more powers, spending, and activities in the community—will be one way we will manage the centrifugal disorienting tendencies of global markets and new technologies,” he adds. Rajan, a distinguished finance professor at the University of Chicago, was the governor of the Reserve Bank of India for one term, and he has also served as the IMF’s chief economist. He was one of the few economists to predict the financial crisis of 2008. 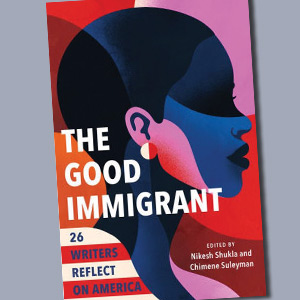 The Good Immigrant: 26 Writers Reflect on America (Little, Brown), edited by Nikesh Shukla and Chimene Suleyman, also speaks to the current moment in our nation’s complicated history. In this timely collection of articulate essays, first- and second-generation writers share their in-between stories and reflect on immigration, assimilation, race, and identity. How do they fit in—or don’t fit in—when they’re often seen as the “other” in a polarized society? There are five contributors of Indian descent: Priya Minhas, Tejal Rao, Krutika Mallikarjuna, Fatima Mirza, and Mona Chalabi. Other backgrounds include Pakistani (Fatimah Asghar), Nigerian (Teju Cole), Chinese (Jenny Zhang)—and, of course, mixed (Alexander Chee). Shukla, a British-Indian novelist and screenwriter, also edited the U.K. edition of The Good Immigrant. What these twenty-six writers do, Shukla notes, is “engage with the most vital question we now face: What do we want America to be? They cannot speak for all immigrants, but their stories illuminate a whole world of experience that is too often hidden from view.”