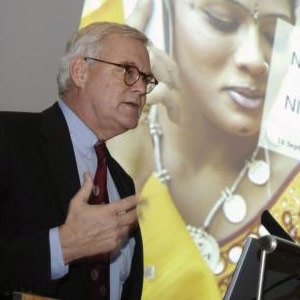 Fareisa Joemmanbaks doesn’t sound like an Indian name. But she is indeed a PIO, short for ‘person of Indian origin,’ though in the Netherlands she would be considered Hindoestanen (the Dutch translation of 'Hindustani').

The Dutch East India Company was established soon after the British East India Company in the early 1600s. Although the connection was mostly in trade, and the Dutch didn’t establish a colonial presence, they did import indentured workers from the subcontinent to their colony in South America.  Originally called Dutch Guiana, it became the Republic of Suriname after gaining independence in 1975.  Many Indians moved to the Netherlands in subsequent years, but the majority population in Suriname is still Indian.

And in the Netherlands, these Hindoestanen have been joined by more recent migrants from India, giving rise to an Indo-Dutch community that’s a little over 2 percent of the population.

Joemmanbaks gained notice when she became Miss India Suriname in 2006 and Miss India Worldwide in 2007. Later she appeared in an Indo-Dutch feature film titled Saiyaan Chitchor. Anil Ramdas, a Hindoestanen journalist, won the E. du Perron prize in 1997. Web portals like Chatney.nl (yes, that’s not a typo) keep the Hindoestanen connected to each other and their Indian heritage. Besides Dutch, Indians who came from Suriname speak Sarnami Hindustani, which in a way separates them from newer Indian immigrants.

Amsterdam, The Hague, and Rotterdam remain the main centers for the Hindoestanen. According to some reports, The Hague in a few years will have the biggest Indian temple complex in continental Europe.