Hate Crimes: Important to Address the Root Cause 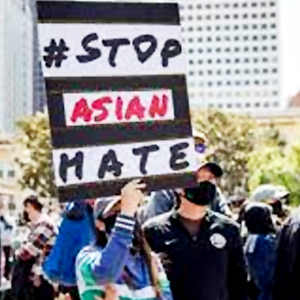 We, the minorities, the communities of colors, the immigrants, are deeply shaken by yet another heinous incident of hate crime—the recent shooting and killing of eight people, six of whom were Korean American women. The perpetrator in this March 16 incident in Atlanta, a young man motivated by his hatred for Asians, has attempted to deflect the blame for his dastardly act on sex addiction. As if that makes it justifiable!
Regardless, his attempt to deny or deflect attention from racial hatred is unconvincing, considering six of his eight targets were Korean American women.

Each time we see such a blatant and shocking incident of hate crime it sparks deep concern, if not outright fear, in the minds of minority communities about our place in society. The messages of anguish being shared amidst Asian communities are necessary for they are cathartic. But we must do more than the typical moaning and groaning in the immediacy of such a tragedy and then getting right back to business as usual in a matter of days. The work of preventing the next such incident has to be ongoing.

It is comforting and encouraging to see Asian advocacy organizations step up to action in the face of this crime. The Asian American Advocacy Fund (AAAF) and the Asian Americans Advancing Justice (AAAJ) are just two of the many organizations that are spearheading activism to combat such hate crimes. Having this March 16th incident categorized as a hate crime and working on legislation to combat hate crime are just a couple of the many initiatives that such organizations are working on. They need our support—in time and money.

But can we stop there? While activism and legislation are needed and helpful, no significant change can happen unless we address where such crimes take birth: in the hearts and minds of the haters. It is the othering of “foreigners” of color that fuels this hate.

The only enduring solution to that is a more integrated and assimilated society. This means that each demographic community should feel responsible to challenge the comfort of the silos and enclaves along community lines that are quite prevalent in our societies.

While we may have little control over the hearts and minds of haters from the outside-in, there is a lot we can do from where we stand to promote integrated communities—the kind where the othering of those who are culturally or racially different from us can be eliminated.

Minorities and people of color often feel diffident about assimilating in public even in their own towns and cities. But we must challenge our comfort zones. Encourage children to join boy scouts or girl scouts. Participate in town hall meetings. Volunteer in local organizations and causes such as soup kitchens.

We must also support ethnic organizations that are contributing to the welfare of the communities they live in, and thereby promoting integration.The Atlanta chapter of BAPS Charities, a wing of the global Swaminarayan Sanstha, holds a much-attended annual charity walk for the specific purpose of raising funds for the Children’s Healthcare of Atlanta. Recently Vibha, Inc. a national Indian-American charity organization,raised $40,000 to donate 100 chrome books to the Sheridan School District 2 in Denver, Colorado. These are just two beautiful examples of the many Indian-American organizations that are giving back to their local communities.

Such work makes for visible markers of how we, as a minority community, are making a positive impact in society. Supporting and participating in such organizations may seem unrelated to hate crimes; but such initiatives go a long way in bridging the gap between immigrants and the mainstream populace. And it is there where the battle lies, much more so than activism and legislation, no matter how much these actions are also needed. Fortunately, these two remedies are not stacked against each other, but rather, complement each other. While activism and legislation help in deterrence of hate crimes through harsher punitive measures, working on root causes may help defuse the underpinnings of hate. It is harder, if not impossible, for communal or racial hatred to flourish in integrated communities.


Parthiv N. Parekh is the editor-in-chief of Khabar. Letters for consideration in response to this article can be sent to letters@khabar.com.