Trump and Modi: Two of a Kind? 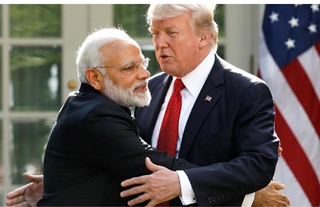 In some ways, yes—but in many other ways, they are worlds apart.

“Titans of hate politics” is how an Al Jazeera article describes both Donald Trump and Narendra Modi.

Speaking about these heads of two formidable democracies, Dr. Tinaz Pavri writes in the February 2018 issue of Khabar (“A Tale of Two State Elections:Gujarat and Alabama”): “In both India and the U.S., a disillusionment has set in with the leaders, both deeply divisive and known to raise tremendous emotions on the part of their supporters and detractors.”

Indeed, the Trump-Modi comparison is inevitable, considering some of the similarities between them:
• Both came to power by whipping up nationalist fervor.
• Both have exploited their religious base for electoral gains.
• Both appeal to nativism and clannishness.
• Both are democratically elected, but behave more like autocrats.
• One, of the 56-inch chest, and the other of “My nuclear button is bigger than yours,” both are big on bravado and hyperbole.
• Both exhibit shades of demagoguery. Yet, there is a vast difference in the degree of it. In contrast to Trump, Modi seems like a veritable statesman. (That is not to say that he and his ideological base do not trigger concern, if not outright fear, amongst the minorities.)

While it’s instructive to observe the similarities between these two highly influential heads of nations, it would be a mistake to draw a broad generalization to go so far as to say that both are of a kind. That would be a disservice to truth, and to Modi as well.

Because while Trump is all of the following: juvenile, incorrigible, narcissistic, and—by accounts in Michael Wolff’s book Fire and Fury—a scumbag as well, Modi on the other hand is more complex, and, compared to Trump, far more evolved and, dare I say, even saintly.

While Trump is utterly irredeemable, Modi, to his credit, has positive traits as well, which often go unacknowledged in the Western media. And so, highlighting the differences between these two, who are often put in the same box, becomes that much more important:
• Trump had come to symbolize greed even prior to his run for the presidency. Modi, on the other hand, seems personally incorruptible.
• Modi is an extremely hard worker who is reported to sleep barely 4 to 5 hours a night. The TV-watching, golf-playing Trump, on the other hand, is, by all accounts, one of the least engaged Presidents in U.S. history. (Of course, if you consider tweeting—the bulk of which is rants and raves—he is extremely engaged.)
• Other than his penchant for a relatively indulgent wardrobe, Modi lives a simple life, influenced by yogic prescriptions. In Trump we have a hedonist who is a walking advertisement for bling.
• On the same note, Modi has spiritual convictions that give him the strength to pull off a nine-day fast each year—a far cry from the McDonalds-chomping glutton in the White House.
• While sound bites are very much his thing, Modi’s oratory skills are far beyond just those. Trump’s public discourse rarely goes much beyond sound bites, and those, too, are more in tune with immature teens rather than worthy of adults, let alone presidential.
• While Trump seems incapable of visualizing beyond his next reactionary tweet, Modi has shades of a visionary in him. It’s a different thing and a sad one that his visionary bent seems a bit tainted with grandiosity that has him unleash massive policy changes like demonetization and GST (Goods and Services Tax) with the lack of necessary forethought and planning.

Trump is crass, clueless, and cunning—a dangerous combination that makes him a ticking time bomb. Modi, on the other hand, can revolutionize India, if only he is able to overcome his own communal blinders and his visions of grandiosity.