Whose Worldview is More Aligned with Reality? 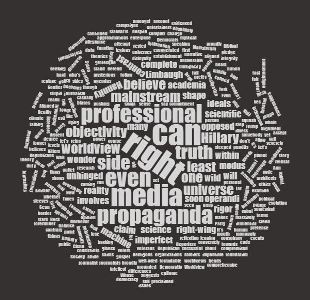 The political discourse of the nation is no longer just about policy differences. We have come to a point where each side believes the other is stupid or sinister, or both. They are convinced the other is the epitome of lies and propaganda.

How can both be right? This polarity suggests that at least one side is severely compromised in either intellect or integrity, or both. Granted, truth is somewhat mystical in this complex universe; no group can claim complete monopoly on it. And yet there are approximations of the truth, and an alignment towards those (as opposed to wild conspiracy theories) reveals whether one is grounded in reality or unhinged from it.

So, who’s right if both Democrats and Republicans believe they are the saints and the other the Satan? Let’s examine the influences that shape the worldviews of each side …

The Democratic worldview, broadly speaking, is aligned with mainstream media, academia, and science. Mainstream media is a realm of professional journalists who function within the constraints of stated ideals of objectivity, balance, professional rigor, and a code of ethics. While complete lack of bias is impossible in any human enterprise, there is at least an attempt, even if imperfect, to abide by a professional journalistic creed: “Members of the Society of Professional Journalists believe that public enlightenment is the forerunner of justice and the foundation of democracy. The duty of the journalist is to further those ends by seeking truth and providing a fair and comprehensive account of events and issues.”

In stark contrast, the right-wing worldview is distrustful of academia and science. This is evidenced, amongst many other things, in their campaigns to replace the scientific theory of evolution with a Biblical story, and their continued refusal to accept climate change despite hard scientific data. In terms of media, it is Rush Limbaugh, Sean Hannity, Ann Coulter, Glenn Beck, and a whole army of such talking heads that are the architects of their worldview. These stalwarts of the right, who border on cult personalities, have absolutely no pretence of objectivity, let alone any pledge to professional rigor or ideals. To the contrary, many of them are self-proclaimed entertainers who proudly wear their allegiance to the right on their sleeves. In fact, they shout down even the veterans of the Republican Party for their “disloyalty” if these old timers don’t fall in step with the prevailing moods of the far right.

Reporters, let’s say at the New York Times or even the Wall Street Journal (which is seen as right leaning), have to be answerable not only to their own organizations, but also to the establishment of professional journalism. They have a template and a set of guidelines to follow, which reins in, to a large extent, their personal biases. The modus operandi of mainstream media involves at least some commitment, even if imperfect, to objectivity, research, and investigation, as opposed to pushing agendas. Even the pundits in mainstream media who have the power to shape opinion have to defend themselves against a multiplicity of views within their own media outlet.

In contrast, Hannity can very casually claim that Hillary is dying from some mysterious illness, and pretty soon millions of his foot soldiers of a well-oiled propaganda machine will run with this narrative. Limbaugh can mouth off wild innuendos about how Hillary is the most evil person on the planet, and soon that becomes the gospel truth to his legions of loyal listeners. The modus operandi of this massively influential right-wing cabal involves vested positions, insinuation, incitement, and polarization. Moreover, being Hitlers of their universes, they can easily squash dissent on their shows.

No wonder these demigods of the right have been so successful in creating an alternative universe of their own, completely unhinged from reality. It’s a universe where the flaws of Hillary, even when very real, are exaggerated to grotesque levels; and conversely, where Trump can openly boast, “I could stand in the middle of Fifth Avenue and shoot somebody and I wouldn’t lose any voters.” What, other than the backing of a formidable propaganda machine, would allow one that degree of immunity?

At first glance it’s a wonder how two sides can both believe they are being conned by the other. On reflection though, it makes sense: if you are steeped in propaganda yourself, then, of course, everything coming from the other side will look like propaganda to you.