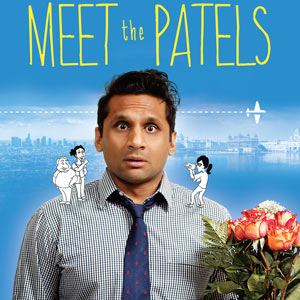 If the title sounds like a marketing line, it’s precisely to highlight the fact that Meet the Patels—a documentary chronicling, analyzing, and laying bare an intense 2-year campaign to find a bride for Ravi Patel—has won over audiences through pure heart and word-of-mouth, not slick marketing or big-studio production. Ravi Patel, one of the directors, talks to Khabar about the reason for turning the camera onto himself and his family through such a personal chapter of his life, and the nuts and bolts of the making of it.

By any measure, bride hunting through the traditional methods, for an arranged marriage, is a discomforting process all by itself. Why on earth would anyone want to add to the torture the live filming of this often cringe-inducing process, and then share it with the world?

For one - it requires vision, conviction, guts, and intelligence to pull it off. Not to mention a proficiency in filmmaking. Thankfully, the Patel siblings, Geeta and Ravi, have displayed all of that in great measure to deliver a film which, while aiming to be a documentary illuminating the intricacies of the matchmaking process in the Patel community, is also witty, warm, and loving—all that one would want from a romantic comedy feature film.

What started out as a home video in 2008 is now dressed up as a film that is doing the rounds in prestigious circuits and generating rave reviews. “Sharp” and “riotously funny”, says Variety. RogerEbert.com describes it as a “theatrical crowd pleaser!” Scott Feinberg of The Hollywood Reporter is even more enthused about it: “The funniest doc I’ve seen in years and a sure-fire Oscar contender.”

So how does one go from a home video to being a potential Oscar contender? Well, it helps that Ravi Patel is an actor and his sister, Geeta, a filmmaker and writer. Even so, with film credentials under their belt, how and why did it occur to them that filming the unpredictable and long saga of matchmaking, with its biodatas, matrimonial conventions, family net-working, arranged dates, and so on, would make for good footage, let alone a documentary film that would have popular appeal?

As the story goes, Ravi was fast approaching 30, and had recently broken up with his American girlfriend, Audrey. Having seen the success and joy of traditional arranged marriages, not only of his parents’ generations but also of some of his peers, Ravi had come to believe that when it came to marrying, he wanted someone from a similar background. So, during a trip to India, soon after his breakup with Audrey, Ravi decided to go for a traditional campaign of matchmaking. Soon, as is the norm, not only his parents, but also his extended family and clan were active partners in Ravi’s search.

Anticipating the humor, the heartaches, and all the drama that was sure to ensue, the siblings, Ravi and Geeta, decided to film the proceedings—just as a fun and cathartic home video. “We made it as a coping mechanism for something every human being suffers from: Family,” offered Geeta. So the instructions to their parents and the extended family was to simply go on conducting the business of matchmaking and just ignore the camera altogether.

Armed with hours of what they considered hilarious footage of how a Patel family goes about the business of finding a life partner, they returned to the States. The siblings discussed how the issue, though, was not just exclusive to them. Up to a certain extent, even though the process may be different, they realized that the dilemmas that come up for someone seeking marriage are quite universal. That’s when the idea started to concretize that perhaps they could do something a bit more formal with the video footage they had. The idea of making it into a documentary film project was thus born.

Following are edited excerpts of our phone interview with Ravi. 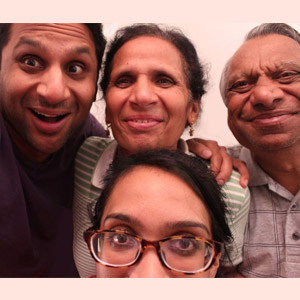 Why did you decide to turn the camera on you through such a personal episode of your life?

If I am being honest, even before that trip to India, maybe a year or two before, I used to do a comedy routine at Indian events where I was often asked to emcee. My comedy was about how my mom was setting me up with these girls around the country, she was emailing me these pictures and resumes, and how others from the Patel community were getting involved who didn’t even know the boy and girl well, but thought we would be great for marriage! I was killing it! There was something emotional in the way people were laughing. When I asked everyone in the room how many of them were single, everyone except maybe the organizers raised their hand. And that was when I realized that this is something that could be important and that could affect people in a big way.

The stellar cast and crew of Meet the Patels: Geeta and Ravi with their mother Champa and father Vasant.

We made the movie in part because we felt that while these topics have been addressed many times, we didn’t really feel like there was a truthful exposition on the subject, and we felt that by telling this story we could potentially help some people. We had heard a lot of hilarious stories about this situation, but also a lot of tragic ones, some even
involving suicide, so we thought maybe we can use this film as some sort of dialog for people who are experiencing this.

And how did this turn into a comedy documentary?

Originally this was premised to be more of a journalistic thing. We made an attempt to make it more academic in nature, something that might help connect the dots between what I was experiencing and broader themes in our culture, or parallel situations in other cultures. We had interviews with relationship experts.

But ultimately we figured out that it’s not really our responsibility, nor are we qualified to make any sort of academic assessment. We felt we should just tell our story as best we can, try to be as honest as possible, and go deeper into the nuances even if they are alienating or confusing. [That way] we can just tell the truth as best as we can, while also trying to make it as entertaining as possible.

We also wanted to take the romantic comedy non-fiction genre and throw that structure on top of the documentary. We wanted to experiment with the form and see if we could make something that hopefully created nostalgia in the viewer, where they can’t tell they are watching a documentary because they enjoy it so much.

Considering how your film turned into an entertaining comedy, has it also remained an authentic documentary? How much of the film is conceived, scripted, and directed, and how much of it is not?

Everything in this movie is true and unscripted. I don’t think I could write or imagine any of the things that come out of my parents’ mouth. All the hilarity that takes place on camera is unfortunately my reality. The only thing that we did work on was the animation [that appears in the film at various stages to fill the narrative gaps]. That [animation] was technical and had to be precise. We did those stories over and over again, until we had got what we thought was the perfect length and tempo.

For a documentary, what you need is authenticity and vulnerability out of your subjects. You need everyone to act the same in front of camera as they would without them. Since I am an actor, I am actually more capable of being myself in front of the camera than probably most people. Because I am just very comfortable with the camera. As to my parents, I have no explanation! They are somehow natural. They should definitely win a bunch of Oscars if they were acting!

The Patel siblings, Geeta and Ravi, put to great use their film background in conceiving this film, and then went about executing it with vision and conviction. 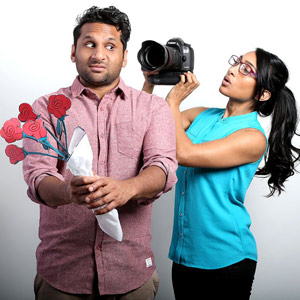 How many hours of video footage has the film been edited from?

[Starting from the India trip], we shot probably over 300 hours. The only thing anyone [in their families in India] could talk about was that we weren’t married. [We knew we wanted to shoot everything about that topic and matchmaking], so, we ended up with a good bit of footage about people pressuring us about marriage, and us talking about these pressures, and the biodatas, and the Patel conventions.

Arranged dates—the kind that you were set up on when your matchmaking campaign continued in the States—are inherently uncomfortable to begin with. How were you able to get permissions from those dates to film such a sensitive matrimonial meeting?

That was my sister…Geeta would generally ask for the permission. I am shocked at how much that wasn’t a problem. I think that’s a testament to the kind of implicit trust in our community. Everyone feels a degree of responsibility to each other, and we took that really seriously. We would tell everyone who were kind enough to trust us with the likeness of the movie that we are going to do our best to make a movie with integrity and class, and also make sure that we paint them in the most positive authentic light. I don’t know where else this happens where people are this trusting and I hope that when people see it, they feel like they made the right call and that we did right by them.

Did you ever feel, that at some point, the film
project surrounding your matchmaking became more interesting and important than the quest for finding a life partner itself?

I would almost say the opposite [was true]. It was really hard to go through all these things and to then on top of that throw in this layer [of making a film out of it.]. I would say that was an added complication to something that was already kind of abrasive and new and uncomfortable. I think the documentary just became exhausting at times, and I thank Geeta for being so persistent.

On how and why he thinks Meet the Patels has been so successful despite its modest origins and
production, and not just amongst Indians…

I had thought this is clearly an Indian story. Why would anyone else even care about it? But then we see that on a bigger level, this is a universal story about love and family. I have had people from every walk of life come to me and say, “Oh my God, this is like my family! It reminds me of the fights we have!” We sold out every screening this past year, and 90 percent of the audience has been non-Indian. I had clearly not predicted this. We had a screening in Chicago, and there were kids below the age of 15, there were couples in their 30s, older people, they were all laughing, sometimes together and sometimes in different parts, but clearly enjoying the movie and taking their own takeaways.

The fact that it is all happening without a budget and it’s all word of mouth, it’s so empowering and exciting. Because, the cynics didn’t think this movie had an audience. They thought – oh, it’s a documentary, it’s about Indians, there are no famous people in it, and it’s not about war or tragedy. No one’s gonna watch it! But I think the audiences are the reason the movie is doing so well, they are the ones who have made it kind of a mandate to say – hey, this is about family, family is actually a really important thing, and also you don’t have to be Indian to appreciate the themes in the movie. 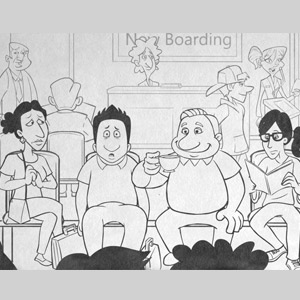 Viren Mayani is a senior film and entertainment contributor with Khabar.