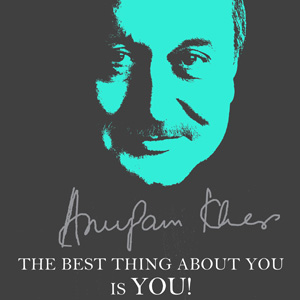 The incorrigible contrarian, in an interview with LAVINA MELWANI, talks not about his successful career spanning 450 films, but about embracing failure, the theme of his just launched book.

Trust Anupam Kher to be wickedly contrary— while everyone else writes books celebrating success, he—with a gleam in his eye—writes one that extols the power of failure! And of course, the book—just to be in your face—goes on to become a big success. Indeed at the recent Jaipur Literature Festival, the book was quite a sellout. In this self-help book, The Best Thing About You is YOU, Kher talks about accepting oneself, warts and all.

I met Kher at the book launch in Mumbai and asked him why he celebrated failure when the world had eyes only for success. “I think there is a need in me to be different,” he said. “After all, I was 27 when I played a 65-year-old man in my first film, Saaransh.” What might have been seen as a bad career move helped him smash the myth of typecasting. He added, “I think success is very boring, success is one-dimensional. Failure, if taken with optimism, can be the biggest strength that you are looking for.”

His “failure” was celebrated with great fanfare at the book’s glittering press launch at Mumbai’s happening Le Sutra Hotel, attended not only by Amitabh Bachchan but several media heavy hitters including Pritish Nandy, Arnab Goswami, Nidhi Razdan, and Ashok Chopra of Hay House, the publisher of the book. Each of them read a chapter from Kher’s book, including his wife, actor Kirron Kher. There was a crush of press and paparazzi and the event received wide coverage in national media the next day. We could all get used to failure of this variety!

“Strangely, a play which is based on my failures has been the most successful thing I have done till date.” As he explains, “At the end of the play I felt the tallest man on earth because the world tries to make you become somebody else, and here I was telling everyone what went wrong in my life—my films flopped and I tried to be a tycoon.”

The timing for this book, however, is just right, with so much failure happening in recent years, with markets crashing and people being let go, and with very successful people not so successful suddenly.

Failure is indeed always hard to embrace. Kher, who has acted in over 450 films, 100 plays and won many awards, has also seen the rough side of life with business deals gone bad and other challenges. In the process he has developed into a motivational speaker with insights into difficult times.

“The world tries to frighten you…,” Kher told me in a one-on-one interview, away from the media circus. “The front page news, the breaking news is always about negative things, about disasters, about deaths, about rapes, about markets crashing—you are actually living in a frightening place. So how do you live?”

Kher says each of us has the potential within ourselves to deal with these dilemmas: “I think the strength that you derive from your own self you cannot get from anywhere else—we try and run away from that, because we don’t actually explore our own strength. You need to discover your own strengths and the only thing you have to do is be yourself—it is the easiest thing in the world to be yourself.”

He recalls the struggle to accept himself when he was down. “A few years back I was not doing well financially, and work wise, things had gone haywire. I had overreached in life—I had thought I would become a tycoon overnight—the next media magnate—and nothing was working out. I had plenty of low moments and to top it all, I developed facial palsy. My whole face got twisted. The doctor told me to take a two-month holiday and not do anything and take rest, but I was shooting for Hum Aapke Hai Kaun, and there was a huge set put up for that, the whole cast was there.”

That, he believes, was the defining moment of his life.

“I could easily go to rest for the two months that the doctor suggested and live in this fear for the rest of my life that something may happen to me sometime— or I could combat it and land up at the shooting and report for work. So I did the latter.”

“When you are living from hand to mouth, the only thing that you can have is happiness because it’s free. Sadness, depression, unhappiness are the luxury of the rich and of intellectuals.”

Director Suraj Barjatya worked with him in organizing long shots rather than close-ups and he managed to do the film. He says, “That gave me great courage, because I think if you take life headlong, you feel that certain brave quality that you have in you. It is only when you are stuck in a situation that you decide what you are.”

Around that time, Kher had an intent letter from Penguin for his autobiography. Since he had no work and more than enough time, he started writing and taping and found that he was often taping his disasters and failures, laughing about them, talking about them with humor. The collected material was turned into a play—Kuch Bhi Ho Sakta Hai—which also traveled to the U.S. and was a huge success.

“Strangely, a play which is based on my failures has been the most successful thing I have done till date.” As he explains, “At the end of the play I felt the tallest man on earth because the world tries to make you become somebody else, and here I was telling everyone what went wrong in my life—my films flopped and I tried to be a tycoon… and I was making them laugh. It became very inspirational for people who were watching.”

After the play, Kher has been invited to lecture at universities such as IITs and IIMs, as well as at the University of Chicago and Oxford. The ups and downs of life became the building blocks of the book, which gives guidance on living life to the fullest.

He shares ways to deal with everything from stress to fear to failure. Celebrities may wear the armor of success but as Anupam Kher shows they all have human failings and frailties. And that is why readers will catch glimpses of themselves in the pages, find strength for the days they lose confidence or feel useless. Says Kher, “They need to discover that the best thing about them is them. It is the truth, it is not just a catchy title. I believe in it.”

He recalls that he had started going bald when he was only 23—not the best thing for an aspiring actor trying to make it in Bollywood. “When you are balding, initially it is frightening. Lots of people told me to wear a wig, but I didn’t—it would have closed so many avenues in my life. So I said I am bald, and now everybody wants to be bald! People even shave off their hair! If you think it is a shortcoming, then the world will think it is a shortcoming.”

It is Kher’s hope that when the readers see that someone who appears so successful from the outside has also grappled with and conquered the fear of failure, it will give them hope. While that is an elemental theme of the book, it also offers “Gems of down-to-earth wisdom for upgrading your life and finding inner bliss and tranquility.” The tiny book’s 50 short chapters deal with everything from discarding extra baggage to coping with loss and death.

He feels communication is key: “We have stopped communicating with people. When you go to Europe and America there is no communication. If you look at someone for a little longer than necessary, he will ask, ‘Why are you staring at me?’ In America, it seems everybody has a psychiatrist.

The best thing about India is that we don’t need many psychiatrists, because you can talk to even strangers. Here we have the paanwala, the auto-rikshawala! We can talk to them, they will ask you, ‘Kya sahab, kya hua?’ [And you say] ‘Arre kya bataye sir—bahut problem ho gaya, biwi se jhagada ho gaya, usne ghar se nikal diya!’ You are surrounded by people, and communication happens everywhere.” Says Anupam Kher, tongue in cheek: “There is always a jyotishi who is telling you, ‘Don’t worry, Rahu ki dasha khatam honewali hai, February se aapka accha time nikalne wala hai.’”

Maintaining a childlike sense of wonder is also essential, says Kher. He is still intrigued by the way the theater curtain comes down, by the great amount of adventure in everyday life. “So while I say that the tech revolution and the Internet have brought in great knowledge, it is really just information,” he says. “It takes a certain amount of life lived to turn that information into knowledge. So people exhaust their life at a very young age because they know everything, they just have to press a Google button. But life is not about pressing a Google button.”

Anupam Kher is not dazzled by social media or the mounds of “friends” people make on the Net. “You are making friends on Facebook and you are not even sitting with your own parents! I have nothing against Facebook, but it is taking you away from yourself.”

When life becomes all about people who can help you succeed, and childhood friends no longer fit the bill, something is quite wrong. He says when he needs to feel in touch with life, he turns to a childhood friend who is a cashier in a bank and is least impressed by his success.

He adds, “I think I was brought up in a family which had no choice but to be happy because we were poor people. My father was a clerk in the forest department and we had 14 people in the family he had to feed. His pay was just Rs. 90. So when you are like that, when you are living from hand to mouth, the only thing that you can have is happiness because it’s free. Sadness, depression, unhappiness are the luxury of the rich and of intellectuals.”

[Lavina Melwani is a New York-based journalist who writes for several international publications and blogs at www.lassiwithlavina.com.]