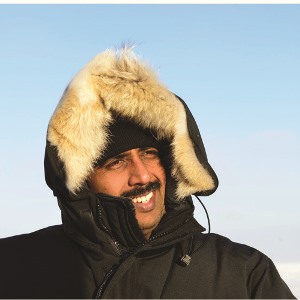 “It wasn’t just the weather that was brutal to a tropical boy like me, but sudden twists in weather also ended up dumping cold water on my plans of extensively photographing, once again, the polar bears. Was I disappointed? Hardly. Not only did I have at least a day of encounters with these majestic creatures, but also marveled at Mother Nature in this Tundra region. These marvels, including the famous Northern Lights, stand on their own—with or without the bears.” —Intrepid globetrotter and photographer BHASKAR KRISHNAMURTHY takes armchair travelers to ruthlessly cold but fascinating frontiers…

The wind chill was -47 degrees Fahrenheit and the open bay was frozen. My hands were numb, face assaulted by the brutal chill, hands desperately struggling to hold steady to click the shutter. I learned the value of 10 seconds in the Arctic chill. Temperatures were insane, lower than I had ever experienced in all my travels around the world.

Cold—intense cold—is a funny thing. For some species it is inhospitable, while others thrive in it. The fact that man has braved extreme conditions and has made his home in such forbidding environs is a miracle. It is the true spirit of survival against adversity. But while humans have adapted to conditions of bone chilling cold, they are now threatening the survival of an enigmatic species that thrives in it—the polar bear.

It is therefore particularly comforting to hear Ian Stirling, the world’s foremost polar bear specialist say, “The survival instinct of the species is remarkable.” His scientific research has paved the way for world authorities to consider urgent actions for protection and conservation. For 40 years, he has been at the forefront of learning, sharing and educating the public and policy makers. He says, “If man can find ways to conserve, polar bears will find ways to survive.”

Clad in a balaclava, layers of thermal, Canada Goose parka, and heavy mittens, I was braving the super-chill of that northern morning. Frozen but alert, I kept watching outside, determinedly trying to stand still as a mother bear and two cubs walked past elegantly at a comfortable pace. I heard someone say in the back, “They can walk 25 miles a day.” The landscape was devoid of trees: a vast open space of stark white sheets of ice and snow. 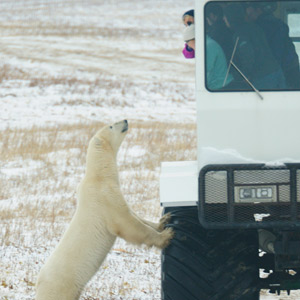 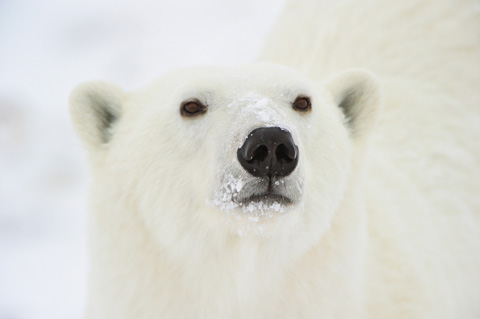 The author was one of only 40 people worldwide allowed to study and photograph polar bears during the season, at the Wapusk National Park in the northern frontiers of Canada.

The bear walk continued in a straight line right up to our buggy, which is designed specially with large tires to roll on the Arctic tundra. When she arrived, Mama stood up on her hind legs, rested her two massive front paws on the buggy, and watched me closely, eye-to-eye, as the cubs looked all around— curious, hungry, apprehensive, and vulnerable!

For over four years I had planned to travel north to the polar world for a glimpse of the bears. It had taken a great deal of research, communication, and coordination to arrive in a place where just 40 people in the whole world get to be once every year. I have known places where human presence is restricted to conserve the landscape and wildlife. This, however, was far more restrictive and quite special.

(Left) A close encounter—from the only day of bear sighting in what is otherwise a prime time and location for many days of studying and photographing these polar giants.

What made this trip a reality?
Frontiers North Adventures partner with Polar Bear International to provide the only opportunity for a maximum of 40 people to get to Wapusk, which means “white bear.” They are authorized to take a caravan of buggies and create temporary, bunker-style lodging, hooking up like railway bogies—all this in the middle of nowhere. Among 12,000 plus polar bears around the world from Russia to Alaska, Wapusk National Park, to which access is only by helicopter, tundra buggy, or snow mobile, offers the best chance for survival and further scope for study of the species. In November, when temperatures plunge sharply to reach inhospitable lows, polar bears become more active and feel at home!

My travel plans, however, colluded with the change in weather up north, vagaries of air travel, hopping through airports, and plans vacillating on an hourly basis until I reached Cape Churchill several days later (at one point almost abandoning the trip). But eventually I was high up on the famed Hudson Bay in the Wapusk National Park, Canada. 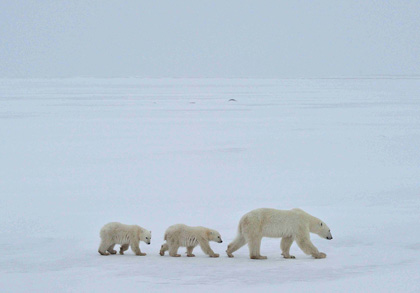 Call it climate change or games of the weather god, but due to extreme temperatures the bay froze earlier than normal, triggering a mass exodus of polar bears to the newly formed ice plains. This happened just a day after my arrival, giving me only the first day where I could have any degree of encounter with the bears to photograph them. Fortunately, this threesome—the mother and her cubs—were more than obliging. Their determination to look for prey made them almost fearless.

Since leaving the den in Spring (May over there) and bringing her offspring to the open areas, Mama Bear wouldn’t have eaten. Her best meals are the ringed seals that inhabit the cold waters in the northern region. As temperatures dip, the open water freezes—and it’s freedom for life in the Arctic region. Bears hang around the edge of the ice where the seals peep through small holes to breathe, offering the best choice for these opportunistic predators. The polar bears’ determination to search for the kill, away from us on the frozen tundra, effectively altered our encounters with them, as I never got to seeing them again. 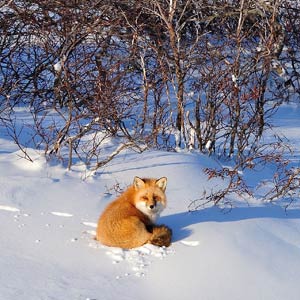 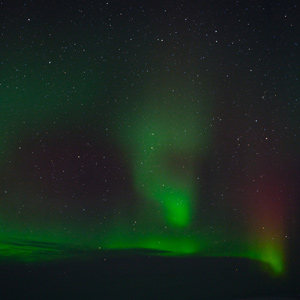 Was I disappointed? Not really. Admittedly for myself, tropical weather is more comfortable, but the chill of -40 degrees opened my senses to the life and times of the northern region, an experience that I hope to repeat. While the weather derailed some of my plans, there were rare experiences that I cherished: the unforgiving environs, the arctic fox, the red fox, and the magical northern lights [above] that danced for me every alternate day.