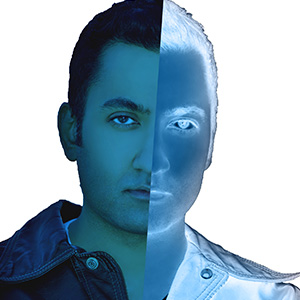 When Ashok Rajamani suffered a massive brain hemorrhage, just hours before his brother’s wedding, his life was transformed in an instant. How did he deal with this altered reality? Rajamani, who writes about it in his harrowing memoir, spoke to Khabar before he participated in Atlanta’s AJC Decatur Book Festival.

What happens to Ashok when a severe brain hemorrhage incapacitates him? He is first hospitalized in Washington, D.C., for three months. Later, overcoming two bouts of meningitis, tubes drilled into his skull to drain the brain of unwanted fluids, and several stressful and life-threatening situations at the hospital, he moves in with his parents to start the long and arduous path to rehabilitation. Rajamani soon discovers that he has lost half his vision in both eyes and that he would now be prone to episodes of epilepsy. Another downside from the hemorrhage is the loss of emotional memory and short-term memory. Loss of memory also brings with it some vagueness about his sexuality. The precise and often exhaustive description of the injury, consequent surgery, and recovery process allows the reader to truly grasp the severity of brain injury. A healthy dose of humor and wit softens the harshness of the gritty details: “An unseen nurse wheeled me into the operating room. It’s strange, but I swear it was my linebacker abuser Janet. Or was it Satan Mephistopheles himself? Let’s just call her Janestopheles.” Rajamani’s detailing of the many disappointing doctors’ visits and at times misleading medical advice is eye-opening and a worthy addition to current debates on the American health care system.

What the story lacks in narrative depth and language is made up for by the narrative arc, which goes back and forth between the past and the present, evoking the feverish hallucinations of his posttraumatic brain. By weaving certain stories from his childhood into the arc, the author renders a fuller and more vulnerable protagonist. Particularly interesting, for an Indian-American audience, are the accounts of racism and bullying that Rajamani encounters in school and his home-town community in Middle America. The description of holiday travel to India seems to be a common narrative conceit in current Indian-American writing. This book employs the same tactic, and unjustifiably so. In this instance, depictions of India seem prosaic and staid, and as such unnecessary and irrelevant to the story he is telling: “India was a world of contrasts…Farm animals stopped at crosswalks.” In contrast, though, his retelling of his early career experiences is refreshing and challenges the model-minority label that is often affixed to Indian experiences in the U.S.: “…public relations was a great place for an alcoholic, as the business not only welcomed drinking, it demanded it. I got the job and kept on boozing.” The book ends with Rajamani eventually making peace with his body, mind, and an altered reality. His writing is raw, visceral, and unabashed.

When did the idea for this book take shape?
Probably four years after rehab when I started attending brain injury support groups. I saw the horrible things that could happen to people and the consequences they would have to bear [for the rest of their lives]. Many of them were quadriplegic or paraplegic, with tons of disabilities. I am very lucky. I am blessed with the ability to articulate [my experiences]. I wanted to document my experiences.

Some of the stories you share are very intimate and profound. How did you handle this with your family?
Mine was a prototypical Indian family in an all-white community. We were the odd-ballers. Yes, in my family it was all about honor and dignity. We kept everything to ourselves. So, I talked to them about the book. They said, “Ashok, we expect this from you!” They gave me the freedom to be honest. This is not to say that I was not wary. The book was my Christmas gift to the family! I think my family has made their peace with my writing now. 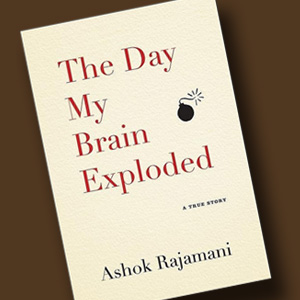 Do you have any advice for fledgling writers who might want to write about intensely personal experiences, especially those from our community?
You just have to throw away issues of fear. The community might try to push you down. But you have to be courageous and fearless.

Have readers walked up to you to talk about what the book has meant to them?
Yes, I just had a reading in New Jersey, where my parents live. Many of my parents’ friends are elderly South Asians. One of them had recently gone through prostate cancer. He attended my reading—and later stood up and talked about it. He teared up. His wife told me that he had never discussed these things with her before. So…I really hope this book can help people talk about mental health issues.

What books and writers do you turn to for inspiration?
I like acerbic memoirs…by writers like David Sedaris or Augusten Burroughs. I love reading Kamala Subramaniam’s translations of the Mahabharata. I like Katherine Dunn’s Geek Love. I like reading books that turn tragedy into hope with humor and irreverence…the “anti-Oprah book club” books! Where there’s no mawkishness…books that deal with pain but are vulgar and funny.

I was surprised to read about your experience with racism where you grew up.
Yes, racism was hard. I often say that if I hadn’t survived racism and bullying, I would never have survived this [hemorrhage]. Sometimes people don’t get racism. Unless you grow up in a place like where I grew up…in Illinois, where nobody looked like us… you can never understand it. But I learned from those experiences…the pain gave me strength.

I dedicated this book to the Indian boys and girls growing up in small-town America.

What has the reception been in the South Asian community?
I am so delighted and awestruck by how this book has been embraced by the community. I was a bit trepidatious at first. But I’ve had many Indians and Indian-Americans writing to me about how they loved the book. I feel like all ethnic writing [on traumatic, life-changing experiences] is either black or Hispanic [in the U.S.]. There isn’t enough out there about what Indian-Americans go through.

There is also this model-minority label that we have to aspire to….
Oh, absolutely.

In reading your book, I was struck by the level of subjectivity in medical advice and quality of care that you received. What kind of advice would you have for survivors such as yourself and their families?
First, I would like to say that a patient’s recovery is parallel to the doctor’s humanity. A lot of doctors have this god-like image. Patients deserve more…more humanity and kindness. I would advise people to do their research. I for one went through many doctors. I have had some great doctors, too. But patients should not have to put up with abuse. No doctor is above you. So keep searching until you find the right doctor and do your own research.

Didn’t an earlier version of the title have something to do with Curd Rice?
Yes! Adventures in Curd Rice! Oh, I could write tons of stories about thayir sadam (Tamil for curd rice).

In one of the interviews that you did you said that you see yourself as queer. I am curious to know why you didn’t talk about it in greater detail in your memoir.
Well, it’s like thayir sadam. Sexuality, like thayir sadam, deserves its own book! But, absolutely, I would definitely write about that. It just didn’t fit here, though. This book was about my hemorrhage. Sexuality deserves its own book.

Correction: Ashok Rajamani grew up in Illinois, not Michigan as originally written.