Americana: Amazing Grace: The Birth, Life, and Death of the Southern Confederacy 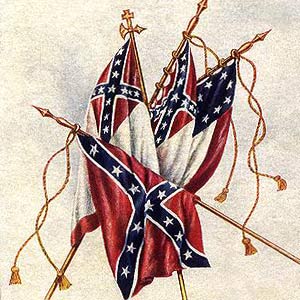 On the evening of June 17, 2015, nine black people were murdered while attending a Bible study class at the Emmanuel A.M.E. Church in Charleston, South Carolina. The young white male who shot the nine, Dylann Roof, is a white supremacist. Within a few days of the massacre, we see images of Roof with the Confederate Flag and learn that he recently visited the Confederate Museum in my hometown of Greenville, South Carolina.

On June 22, close to 20,000 blacks and whites gathered for the “Bridge to Peace” walk in Charleston, carrying American flags, and singing choruses of “This Little Light of Mine” and “God Bless America” in a show of solidarity for those who were murdered. Charleston’s streets did not erupt in violence, as they did in St. Louis, Missouri, and Baltimore, Maryland.

On July 10, the Confederate Flag was peacefully removed from our statehouse grounds—albeit, after some tears and heated debates.

This is the story about the American Confederacy, but I am proud to note that this is also a story of Amazing Grace.

Like most historians, I believe the Civil War was fought over slavery. President Lincoln, and a growing number of voices in Northern states, wished to limit or outright abolish the “peculiar institution.” Some in the South, particularly plantation owners who needed slaves to work the fields, pushed back. Yet, a few of my Southern friends and a small minority of historians, say, “wait, not so fast.” The war was not about slavery, they argue, it was about “states’ rights.” They make the case that the federal government did not have the constitutional authority to meddle in state business. They further argue that a majority of people who lived in the South did not own slaves, so why would such men risk their lives with nothing to gain? Despite the fact that more than 4 million enslaved human beings lived in the South and touched every aspect of the region’s social, political, and economic life, some academics and a number of very educated people do not believe the Civil War was fought over slavery.

The British organized the Carolinas in the late 1600s. In order to encourage settlement, they offered settlers complete freedom of religion. Jews from all over the world settled in Charleston and established their synagogues. So did the French Huguenots, as did the Baptists. The British selected the Charleston area because of its natural harbors formed by the Ashley and Cooper rivers. The land was perfect for rice, cotton, and indigo, and all those crops required massive amounts of labor. Slave traders brought “workers” from Africa.

In November 1860, the nation elected Abraham Lincoln as the next president. During the campaign, he had made it clear that he wished to impose limitations on slavery. In response to this threat, on December 20, 1860, South Carolina seceded from the Union. By February 1, Alabama, Florida, Georgia, Louisiana, Mississippi, and Texas had followed suit. Representatives from each state met in Montgomery, Alabama and created the Confederate States of America. A constitution was written and approved. It placed great importance on states’ rights and did not prohibit slavery.

President Lincoln, wishing to preserve the Union, argued that the states could not secede.

On April 12, 1861, the first shots of the Civil War were fired at Fort Sumter, a federal property located in Charleston harbor. Lincoln had refused to withdraw troops from the fort, and South Carolina, claiming the island was now its property, fired the first shots. Shortly thereafter, Arkansas, Tennessee, Virginia, and North Carolina joined the Confederacy. The War Between the States, as some in the South prefer to call it, ended when General Robert E. Lee surrendered to his counterpart, Ulysses S. Grant, on April 9, 1865. Abraham Lincoln was assassinated by John Wilkes Booth on April 15.

General Sherman, in his notorious “March to the Sea,” wished to completely demoralize and humiliate the South, and he did. Some in the South call the Civil War “the Recent Unpleasantness,” because the anger remains.

After the war, Reconstruction, while planned, never really happened. Schools remained closed, people struggled to eat, and life seemed hopeless. During this era, the South was further exploited when some Northerners, called “carpetbaggers,” a reference to the type of luggage they carried, came to the South to snap up the cheap land and plantations. Later in history, the South adopted a “separate but equal” policy in regards to race, a practice that stayed in place until the federal equal rights laws of the 1950s and 1960s.

As noted, some in the South believe the war was about states’ rights, and not slavery. We have a similar split in logic in regard to the Confederate flag. Blacks see the flag as a symbol of oppression and hate. Some whites, on the other hand, see it as their “heritage,” a way of honoring their ancestors who either fought in the war or managed to survive postwar deprivations. Some whites, like Dylann Roof, see it as a symbol of white supremacy. Southern history is complicated! But there is yet more to consider. From USA Today:

Reversing what historians call the Great Migration of 1910-70, hundreds of thousands of blacks have migrated to the South in the last generation. Every year, more blacks move into the South than move out. From 2005 to 2010, the average result each year was a gain for the South of 66,000 blacks. Many came from the Northeast, but the flow also includes the Midwest and West.

Such a confusing intersection! We live in a region that depended on slavery, lost hundreds of thousands of sons in the Civil War, survived decades of subsequent deprivation, created two separate societies for blacks and whites that required federal laws to correct, and then, what’s this? We learn that blacks are leaving their historical “safer havens”—the larger industrial cities of the North and Midwest—for life in the American South? Why?

In an interview with BET.com, Angelo Byrd notes that when he moved from Ohio to Atlanta several years ago at age 25, he never looked back:

“There just are more of us and more of us in prominent roles,” said Byrd, who is now director of transportation for J.B. Hunt, the large transportation company. “I feel more comfortable in a place where Black people are doing important things. I feel there is more of an advantage to being here.”

When Charlie Cox told his friends that when he was retiring he would leave Chicago, no one was too surprised. But c’mon, are you really moving back to your boyhood home of West Point, Mississippi? His wife, who was born and raised in Chicago, was not so sure. Her ancestors had been slaves, and she did not have pleasant memories of her family's trips to Mississippi in the 1960s. But she agreed to move:

"I wouldn't [trade] anything for West Point now," Ms. Cox says as she slides a thick slice of bacon into a cast-iron skillet.

“It’s quiet here,” Mr. Cox agrees. "You can relax more down here. I don't worry about my car when I park out here in the yard."

But some blacks who have returned to the South point out that much work remains. Sharpe Haywood, president of the Flagler County, Florida chapter of the NAACP doesn’t see the new South as hospitable yet. She says, "I think we're being tolerated—not necessarily welcomed."

We will take our leave of these thoughts and move back to 1748. In that year, a violent storm causes John Newton, a slave trader, to pray for God’s mercy. Mercy seemed granted, and while his boat was being repaired, he wrote the first verse of the famous song, “Amazing Grace”:

Amazing grace! (how sweet the sound)
That saved a wretch like me!
I once was lost, but now am found,
Was blind, but now I see.

This is the song that President Obama sang during the funeral for Reverend Clementa Pinckney, the minister who was killed at the church on that dreadful night. The other attendees were at first stunned, but then stood and joined the president in the singing of the hymn.

The relatives of those slain inside the church in Charleston had a chance to speak directly to the accused gunman. Those who chose to speak did not speak in anger and hate. Instead, they offered him forgiveness and said they were praying for his soul.

On April 12, 1861, the Confederacy fired the first shots at Fort Sumter, a now historic landmark just miles from the Immanuel A.M.E. Church. On June 26, 2015, we hope the war that began with the arrival of the first slave ended, with this powerful act of forgiveness on the part of the church community, an incredible story of Amazing Grace.