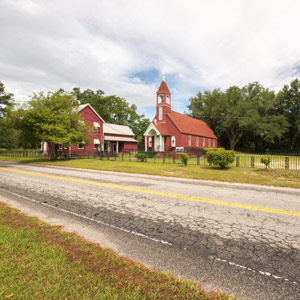 (Left) St. James the Greater Catholic Mission ("Catholic Hill") is the centerpiece of Ritter, a rural community that is a dozen miles from the small town of Walterboro and an hour's drive from Charleston. (Photo: Bill Fitzpatrick)

“Let us pray,” the Catholic priest asks of the congregation, and a hundred heads bow. I am not a member of the St. James the Greater Catholic Church in Ritter, South Carolina, but I bow my head and pray.

Dear Lord, why am I here? Why have you sent me to this historically black church?

I feel a light tap on my shoulder. The black woman to my right, Dr. Alison Mc- Letchie of Claflin University, whispers that the priest would like us (she and I) to talk to the congregation after Communion has been served.

In the Catholic tradition, only those of that faith may receive Communion, so I watch as many of the people leave their pews and head to the altar. The priest serves each a small wafer of bread and then a taste of wine, representing the body and blood of Jesus Christ. In the story of the Last Supper, Jesus broke the bread and drank the wine with his apostles, saying, “Do this in remembrance of me.” The apostles did, not knowing that Jesus would soon be crucified.

“Bill, are you ready? It is time for us to address the congregation.”

She and I walk down the aisle of a church that will likely be listed on the National Trust of Historic Places. Many congregants already know Alison, for as a sociologist she has been studying the history of the community. No one, except the church’s historian, Davetta Greene, knows me.

What am I to say to these people, some of whom had great-grandparents who worshipped here as slaves?

In  past Decembers, I have explained a Christian history and doctrine, but not today, not after this disturbing year. I am reclaiming my America from those who shout and scream of Grand Canyon-sized divides and high concrete walls, from those who would believe there isn’t much good about our land. We have problems, we sure do, but there is an essential warmth and goodness to our people that I have experienced for so many years and in so many different places, no better exemplified by the story of St. James the Greater Catholic Church, of Catholic Hill as the locals call it.

How did it come to pass that I addressed the Catholic Hill congregation?

Six years ago, when my business partner and I sold our company to a Chicago- based conglomerate, I had to find something to do until the expiration of our noncompete agreement. My wife had informed me that sitting around the house, drinking beer, watching ESPN, and then asking her, “What’s for dinner?” when she returned home from work would not be acceptable. I had to find Plan B.

“What if I do the shopping, clean house, cook dinner, and photograph our state’s historic landmarks in my free time?”

We shook hands. It was a really good deal.

In the past six years, I have traveled tens of thousands of miles on paved and unpaved roads, camera in one hand and notebook in the other.

I spent one afternoon on the front porch of the LeNoir General Store. It’s in Horatio, but you won’t find that small rural community on a map. Five generations of LeNoirs have kept it in continuous operation for close to two hundred years. I nursed my Coke and listened, as a number of blacks folks stopped to tell me how much this place and its white owners have meant to their community.

“Now my grandfather couldn’t read or write, so Mrs. LeNoir would help him with his mail, made sure all his bills got paid in time.”

Another older man, after nodding in agreement, offered that when he was a young boy and needed money, the LeNoir family always found an odd job that would let him earn some money.

My notebook contains dozens of such stories of regular citizens, whether they are black, white, or Hispanic, Jew, Catholic, Protestant, Muslim, or Hindu, helping each other and sharing in the life of their local communities.

Catholic Hill Church was formed in 1826 when two Irish-Catholic plantation owners, tired of Charleston’s bias against Catholics, moved inland. They acquired slaves, and as was the custom, the slaves adopted the master’s religion, thus creating a southern rarity: African-Catholics.

During this era, anti-Catholic sentiments were high across the country, particularly in the protestant South. It was thought that Catholics were more loyal to their pope in Rome than their president in Washington. The matter came to a head in 1826 when America’s first Catholic bishop, the remarkable John England of Charleston, traveled to Washington to address the issues with President John Quincy Adams and the U.S. Congress.

In 1833, this same Bishop England who had the courage and intelligence to lecture Washington, D.C., on matters of church and state, traveled the rough road from Charleston to Catholic Hill to greet the African slaves and dedicate the church. His picture hangs today on the inside wall of the church.

The first of several disasters occurred in 1854 when a fire burned the church. With the uncertainties of the pre-Civil War days, it was not rebuilt, nor was it immediately rebuilt after the war. The newly freed blacks had few resources. Those who once had resources, the Irish, never returned to the area. The Catholic diocese forgot the congregation existed!

“How did the Catholic faith survive?” I asked Davetta, during my first visit to the church. “So many blacks of that era formed their own churches.”

“We can start with the people and their faithfulness. Had strong leadership, too: a former slave, Vincent de Paul Davis, acted as a lay minister for many years.”

In 1892, a traveling priest “rediscovered” the lost community. Under his leadership, a schoolhouse and new church were built. In 1935, the faith of the poor community was tested again when a storm destroyed the sanctuary. But prayers were answered when a Northern family donated money for a new church.

After my church tour, Davetta showed me the nearby schoolhouse. When I saw the collection of old photographs on a bulletin board, I laughed. Couldn’t stop laughing.

“Davetta, I’m in that photograph!”

On  the appointed day, I made the return trip to Catholic Hill. Alison had concluded her remarks and it was now my turn to address the congregation.

I first thanked Father Antony, an Indian-American priest from Hyderabad, for the opportunity.

I thanked the black women sitting in the front pews of the church for their beautiful voices. Without the benefit of a piano or organ, they sang the songs of the slaves, our Negro Spirituals.

I turned to the main congregation.

“Good afternoon. My name is Bill Fitzpatrick and I am Irish-American. Perhaps we have more in common than you think. Like your ancestors, my Irish ancestors were not much welcome in this country, not because of their skin, but because of their Catholic faith. We’ve each had to overcome obstacles, but here we are, worshipping side by side. I’ve come here because I want to hear your story.”

In early 2017, I will return to Catholic Hill to help Davetta collect and publish their church’s history. Some believe that their story of faith and perseverance qualifies the site to be a Catholic Shrine. I have volunteered to help with that effort as well.

Many years ago, my parents taught me to live my dream and that ours is a blessed land. This past year has tested my belief in the American Way, and I have wavered, been overwhelmed at times with the stories of power and greed—but that world is so distant from Ritter, and the most magnificent and beautiful Catholic Hill Church.