Americana: Dear Jesus, Here Is Your Year in Review 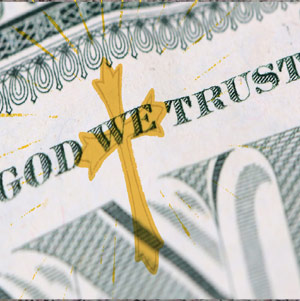 As the year nears its end, I wish to give you thanks for the blessings you have bestowed upon me, an ordinary American Christian.

So another Christmas beckons, the second one that I will pass without a living parent. The days of hearing my mom and sister chatter as they cook the holiday goodies are gone, as are those easy hours that dad and I spent watching a game, glass of beer in hand.

My parents were not outwardly religious, you know that, my Lord. The only prayer we shared as a family was dad’s heartfelt recital of the Irish blessing before our holiday dinners. But maybe that was enough, for when he offered, “May the road rise to meet you and the wind be always at your back,” it was clear to the gathered that his was a prayer for all people, not just for friends and family.

Ours was a privileged family, Lord, though we never thought ourselves rich. We would flip a switch for light or turn a dial for heat, without considering that in many parts of the world such things would be luxuries, if even available. When there were challenges, we believed better days were ahead. To exchange presents on Christmas Eve was a given, as was the feast that followed.

But Lord, I see more clearly now. Due to your grace and plan for my life, I have visited places many miles from the comforts of suburban America. In Mumbai, I have watched dogs and people paw at piles of garbage in search of the next meal. In Tibet, I have seen the places where the red-clothed monks light their red robes and bodies in yellow flame. I have traveled to the dying towns of the American South where hope for this life is as dead as Thomas Jefferson.

There, but for the grace of God, go I.

When I toss my cameras and lenses back in my Toyota I feel guilty, not so much for what I have earned through my hard work, but with the thought that I am not doing enough to help people in need. The small tokens I offer never seem enough, given the blessing you have provided me.

But not all Christians feel such responsibilities, my Lord, and I am tired of their nonsense.

A few months ago, Hurricane Harvey slammed into Houston, Texas. Our customers were impacted, as were our Houston technicians, including one who lost his home and all his possessions to the raging waters. Can you help me, he asked? Sure, the other owner of the company and I replied. We were hardly alone in our efforts to help.

An image of a Houston police officer carrying a mother and her sleeping baby through knee-deep water speaks so well to the essential goodness of humanity, that it goes viral.

We see black, brown, and white people extending their hands to those of any race, color, or persuasion, in their hour of need.

Budweiser forgets about their beer sales and uses their distribution networks to deliver much needed drinking water.

And then there is the story of Houston’s own Joel Osteen, a minister who has a net worth in the tens of millions of dollars. He and a man from the secular world, Donald Trump, have much in common. Both men are white. Both men are rich. Both believe in “prosperity theology,” a line of thought that believes God blesses really faithful people with money, in their cases, lots of money.

There is nothing in the Christian Bible that says Jesus cares about our earthly wealth.

In his Sermon on the Mount, Jesus preached, “Blessed are the meek for they shall inherit the kingdom of heaven.” Later in the gospels, “It is harder for a rich man to get to heaven than it is for a camel to pass through the eye of a needle.” He challenges us to “pick up our Cross and follow Him.” The road will be difficult, we are warned; you will need to give up the attachments in this life to gain the glories of the next.

For nearly two thousand years, the rubbish that is prosperity theology did not even exist. In fact, it is a relatively new American invention, birthed by the “wisdom” of E.W. Kenyon, a late nineteenth century pastor. Our minds are powerful incubators of good or ill, he thought. We should refrain from even using negative words, such as sickness and poverty.

Oh, how American! With a positive attitude, I am in control of my life! I am a winner! And those who have nothing must be unfaithful…

The movement gained momentum during the 1950s, due in part to a renewed national interest in religion, due also to the marriage of television and Christian evangelism. Into our living rooms know-it-all ministers such as Oral Roberts blabbered away. During the course of his career, his “healing hands” touched more than 1.5 million people and his authoritative words reached 500 million more on television and radio. Presidents Kennedy, Nixon, and Carter would all seek his “counsel and prayer.”

If we could add, “and his millions of votes, too,” I might be able to stop laughing.

Norman Vince Peale achieved international fame during this era, mostly as a result of his best-selling book, The Power of Positive Thinking. Few remember that he was also a Presbyterian minister. Peale counted among his friends President Richard Nixon, and God-does-this-make-sense, young Donald Trump. It is true. Donald’s father often attended Peale’s church.

“He would give the best sermons of anyone; he was an amazing public speaker,” President Trump once said, adding, “He thought I was his greatest student of all time.”

If the measure is material wealth, for once he may be telling the truth.

Give to Caesar what is due Caesar and give to God what is due God, Jesus once preached, and so it has always been in my religious life. I attend church to escape the outside world and to find comfort in religious Scripture. But not all Christian denominations separate church and state. A large number of conservative Christians are far more eager to convert their religious views on abortion, immigration, and gay marriage, into American law. Even if they find prosperity theology odious— and most do—that inconvenience is shoved aside when there is opportunity, as there is now. As Chris Lehmann summarizes in the Washington Post,

The key bulwark of faith-based Trumpism is the prosperity gospel—a movement rooted in Pentecostal preaching that holds that God directly dispenses divine favor in the capitalist marketplace to his steadfast believers. Trump assiduously courted the leading lights of the prosperity faith well before his presidential run got serious enough for him to make the obligatory rounds at hardline evangelical gatherings, such as last month’s Faith and Freedom Coalition Conference.

I do not know what good could come from a meeting between fawning preachers and Mr. Trump. On the other hand, I do know that nothing good came from Joel Osteen when his fellow citizens were in need. To be fair, I should note that he did release an uplifting podcast just before the hurricane flooded the city:

The good news is He [God] is going ahead of you right now, lining up the right people, the right supplies, the right opportunities," Osteen said. "He has solutions to problems you haven't had."

Well, hunky damn dory, the Lord has it all figured out! Hey! Where are my golf clubs?

Before it began to rain in Houston last week, the spectacularly wealthy pastor Joel Osteen could have opened up his mega-church to serve as a logistics center…

On Sunday, Mr. Osteen’s church announced that it was inaccessible because of “flooding.” But intrepid journalists proved otherwise. After Mr. Osteen was humiliated on social media, he finally opened the 16,800-seat church to the public on Tuesday. When asked about the delay, Mr. Osteen said that, “the city didn’t ask us to become a shelter.”

Lord Jesus, it has been quite a year. Maybe if I read Peale’s The Power of Positive Thinking, or Osteen’s huge bestseller, Your Best Life Now, I would be more upbeat in my views for next year. But sorry, Lord, in the short term, I remain pessimistic.

Thank you for your many blessings, and I wish you a most Merry Christmas,