COVID-19  In-depth info for Indians in Atlanta/Georgia. Click here
Home > Magazine > Features > Americana: Forget the A’s and Embrace the (4) C’s: The Other Way to Enter Harvard

Americana: Forget the A’s and Embrace the (4) C’s: The Other Way to Enter Harvard 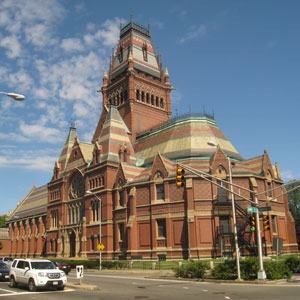 Questioning the aura of Harvard University. Seen at left is one of its iconic buildings, the Memorial Hall.

On a hot Alabama morning, twenty-two-year-old Vivian Malone Jones made her way to the University of Alabama hoping to enroll in a college accounting class. She faced two obstacles.

Second, Governor George Wallace did not wish to allow this race of people into the all-white school. “Segregation now, segregation tomorrow, segregation forever,” he shouted, as she approached.

The Alabama state troopers who stood in front of Wallace heard those words. So did the white people who supported the governor, so did the gathered media, so did the National Guard troops sent by President John F. Kennedy to ensure that both Ms. Jones, and another black person, James Hood, could enroll.

The event that occurred when I was nine years old is remembered as “The Stand in the Schoolhouse Door.” Later in the 1960s, when my parents moved to Alabama, George was still governor and not much had really changed.

In the past few years I have traveled thousands of miles photographing our region’s forgotten historic landmarks. I have snaps of rotting textile mills and of Main Streets where at high noon you can’t find an open restaurant to buy a ham sandwich and a Coke. Worse than the shabby buildings are the shabbier people, milling around, dazed, unemployed, and utterly lost. The jobs are gone, the schools stink, and there is no hope.

Millions of Americans suffer severe penalties for the color of their skin and the luck of the draw. I see both racial and economic injustices every time I leave the comforts of my home, camera and notebook in hand.

Sorry, I am drifting. Today’s subject is the lawsuit brought by the Asian American kids, arguing that Harvard is discriminatory in its admissions practices. I get it. During my AT&T career, less capable blacks and women were routinely promoted into jobs that I wanted and deserved.

But asking me to offer much more then a “Hey, I am sorry,” for kids who feel like more than 20% of their numbers should be admitted to Harvard, and that they are unfairly stereotyped by one of the most liberal schools in the country, well, it is not going to happen. If you think mine is a minority view, think again. My friends, ranging from conservative Republicans to ultraliberal Democrats, think the same.

It doesn’t matter where you go to college!

If you are smart enough to apply to Harvard then any number of fine universities will be at your beckoning. Attend Princeton. Go to Duke, Emory, or Furman. Cripes, join the navy!

Oh, I see. You don’t believe me. Well, consider these facts.

According to a 2015 survey by Business Insider, only one CEO out of our top ten Fortune 500 companies even possessed an undergraduate degree from an Ivy League school. When we broaden the range to include the top 100 companies, we find that a mere 30% of the CEOs attended an elite college.

It is not where you go to school. It is your later accomplishments that count.

The better question is why Asian Americans place so much emphasis on attending Harvard and schools of its ilk. Jennifer Lee, a professor at Columbia University, and Karthick Ramakrishnan, a professor at the University of California-Riverside provide us insight:

A growing body of research has established that Asian Americans tend to disproportionately value prestige when it comes to higher education. In general, Asian Americans would rather be a below-average student at a top ten school than an above-average student at a top one hundred school. Several psychological studies show that white students are more likely to prefer the opposite.

Our research has shown that Asian Americans often define success as being the high school valedictorian, attending an elite university, and pursuing a career in medicine, law, science, or engineering. And there is at least one clear reason for the emphasis on prestige: Elite credentials are seen as a safeguard against discrimination in the labor market.

The importance placed on prestige is partly why so many Asian American organizations have joined lawsuits against Harvard and other Ivy League universities for allegedly capping admissions of Asian American students.

Asian American parents want their kids to attend a prestigious university and become doctors, lawyers, or scientists. Wishing to please mom and dad, that’s what the kids do, often at the expense of their own dreams. These dynamics help explain why a disproportionate 49 percent of Asian American undergraduates in the United States report that they intend to major in science and engineering.

I had no idea of what I wanted to do well into my college days at the University of South Carolina. How am I supposed to know of life’s possibilities at age eighteen? Isn’t the purpose of college to help me learn, grow, and explore, to sort out what I want to do?

In economics, I learned of global trade. Over beers, my friends would speak of their hometowns, that the mills were closing and you could no longer buy a ham sandwich and Coke on Main Street. Some day well into the future, I would remember those conversations when I write stories and post photographs of South Carolina’s forgotten places for the National Trust for Historic Preservation.

In philosophy class, we studied ethics, Aristotle and Plato. In psychology, love and sex, Freud and Maslow. And on one night, a group of us wondered if we should notify the university about two men caught in bed. These nonclassroom experiences and discussions were as important to my growth as the lecture.

My daughter, Molly, had similar experiences.

Like me, she was a B student in high school and attended a large public university, in her case, the University of Colorado. Like me, she was uncertain as to her career choice until late in her college years. A path revealed itself when she traveled with a group to Chicago to study the lives of undocumented citizens. She called one night to give me an update.

“Dad, it’s awful. The undocumented men show up on one side of the street, waiting for builders to offer them daily work. Many get work. Some get paid at the end of the day. Many don’t, and have no recourse. They just worked a whole day for nothing.”

When Molly graduated from college, she worked for a nonprofit company that focuses on social justice. Eight years later, she ran for elected office. In June, she won the Democratic Party’s nomination for the position of County Clerk and Register. Given that she is running unopposed in November, she will soon become one of the youngest people in the country to hold that position.

Oh wait, Asian American think they do because it will insulate them from future discriminations. It won’t, at least according to Lee and Ramakrishnan.

Unfortunately, many Asian Americans will see their careers stall because they will be stereotyped. The executives who participated in the Lee and Ramakrishnan study agreed that Asian Americans are a “smart, diligent, focused, quiet, and technically competent” people, but see them as lacking in creativity and leadership skills. According to the academics, Asian Americans also hit a “glass ceiling” in part because they are not as active in civic affairs and charities, as compared to native-born Americans.

Today, perhaps as a backlash to standardized test scores, academics are studying how best to classify success attributes that are outside of the quantitative.

Martin West of the Harvard Graduate School of Education calls the collection “noncognitive skills.” Decades ago, these some attributes were called “soft skills.”

The Partnership for 21st Century Learning calls them the “4Cs of critical thinking, collaboration, communication, and creativity.” I have succeeded beyond my academic grades because of the 4Cs, and so has my daughter.

I cannot speak for the folks at Harvard admissions, but I can sympathize with the challenge of sifting through tens of thousands of applications, all with perfect academic credentials, many with identical “away from classroom” credentials. If I had to place a bet, it would be that for an Asian American applicant who has the requisite smarts, and demonstrates engagement in a topic that includes aspects of the 4Cs, the odds of entry would be improved.

Not that it matters.

It is what happens after college that matters.