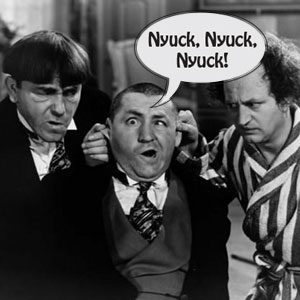 The Three Stooges are lost in a swamp when an alligator appears and snaps off half of Curly’s boot. In trademark fashion, he lets out a “Whoop-whoop-whoop.”

“What’s the matter with you, you knucklehead?” Moe snarls.

“An alligator just took off with half of my boot!”

“Keep moving, you imbecile. Forget the boot. It’s not important.”

Hey, God, are you listening? If you can hear me, will you do our country a favor? Please resurrect Curly, Larry, and Moe, and at the next debate, place them and their nyuck, nyuck, nyucks and yip, yip, yips in front of Wolf Blitzer and between Donald and Hillary. Not to point fingers, but the planet you created needs help.

This current mess reminds me of the time I called to schedule a round of golf in Ireland. “Oh, Bill, it’s rained for two straight months,” the woman who answered the phone told me. “Well, maybe the weather will be better when we arrive three months from now,” I offered, but she wasn’t buying what I was selling. “Maybe it won’t, Bill, maybe it won’t.”

Today, our current state of affairs—and you know what I’m talking about—has me down in the dumps, just like that Irish woman. Maybe if I write about the history of American humor, I will feel better.

Then again, maybe I won’t.

Why do we laugh? Turns out, no one is really sure.

Dr. Robert R. Provine believes it has to do with our evolutionary development, noting that in humans, laughter predated speech by millions of years. Before we talked to each other, we used laughter to communicate. Today, this genetic inheritance causes us to laugh, even when no one has told a joke. We laugh to connect with each other, that’s what he and many others believe.

But we like to laugh when we have our nights out, too, and that is where our narrative begins.

In the early 1900s, the United States had close to 5,000 vaudeville theatres, nearly all of which were under the tight control of just a handful of owners. Each vaudeville show consisted of a variety of unrelated acts, including music, dance, and comedy.

The owners signed their performers to multiyear contracts and then, wishing to wring the last dollar out of the deal, worked the comedians as if they were mules. Denver tonight, Dubuque tomorrow, Davenport after that. Travel was by rail and performances were in venues with no heating or air-conditioning. Drug use was rampant and narcotics addiction common.

“Looking back, I simply don’t know how we survived it,” Harpo Marx once remarked. Comedian W.C. Fields referred to his vaudeville days as “the most miserable [time] of my life.”

The gods of American comedy, George Burns, Charlie Chaplin, Buster Keaton, Bob Hope, and the Three Stooges, all began their careers in vaudeville. Goddesses were in short supply during the era, but one, Mae West, belongs in our pantheon. In the 1932 movie, Night after Night, a hatcheck girl exclaims to West, "Goodness, what beautiful diamonds." Mae’s response, "Goodness had nothing to do with it, dearie," is one of the most famous lines in film history.

The vaudeville era ended in the early 1930s, its death attributable to the rapid rise in popularity of radio and film.

A. O. Scott is a media critic for The New York Times. In a 2015 essay, “Adjusting to a World That Won’t Laugh With You,” he writes:

But we’re also in the midst of a humor crisis. The world is full of jokes and also of people who can’t take them. It can seem, if you dip into social media or peruse the weekly harvest of Internet think pieces, that comedy swings on a fast-moving pendulum between amusement and outrage. We love jokes that find the far edge of the permissible, but we also love to turn against the joker who violates our own closely held taboos. In the blink of an eye, social media lights up not with twinkles of collective liking but with flames of righteous mob fury. We demand fresh material, and then we demand apologies.

Much of the outrage, he notes, is attributable to the use of ethnic and cultural comedy in an increasingly multicultural world. Charlie Hebdo, the French magazine, publishes unflattering cartoons of Muhammad. Islamic militants take offense, and people die. One hundred years ago, their satirical images of the Prophet might have gone unnoticed, except by a local audience.

In the United States, and for many decades, Jews, blacks, and whites each had their own venues, “safe places” where their jokes would offend no one.

In the case of the Jews, the safe place could have been their local country club, or maybe the famous “Borscht Belt.” Located a hundred miles north of New York City, it was the birthplace of many Jewish-American comedians. Blacks, struck with the alliteration of Borscht Belt, named their comedy trail the “Chitlin’ Circuit.” It served the same purpose as its Jewish counterpart. Facing a like audience, comedians could safely mock who they wished.

Away from private sanctuaries, and for much of our comedic history, such was rarely the case.

During the Vaudeville era, owners, fearful of boycotts from church-going, god-fearing people, censored the potty-mouthed comedian.

The radio shows of the 1930s and 1940s, wishing to please their sponsors, did the same.

“Nightclubs,” a venue that became popular after the official end of Prohibition, offered far more freedoms but they were not without risk. As Kliph Nesteroff writes, from the mid-1930s to the early 1970s,

Organized crime and nightclub comedy coexisted. Mob-run speakeasies employed entertainment during the days of Prohibition. When Prohibition was repealed in 1933, vaudeville was dead and the speakeasies turned into legitimate nightclubs…if you were a stand-up comedian, you worked for the Mob.

Rose Marie, of the original Dick Van Dyke television show, notes that “The Mob was very, very good to me.”

Jerry Lewis, a famous comic and long term spokesman for the Muscular Dystrophy Association, nearly had his teeth punched in after offending Albert Anastasia, the head of “Murder, Inc.” Back in the 1940s, it was the press who coined the name Murder, Inc. That was much easier to write than the “Enforcement Arm of the Italian and Jewish Mafias.”

It took decades of legislative action and criminal investigations to free the entertainment industry of Mob control.

In the 1950s and early 1960s we seemed a peaceful land. But below the calm veneer, the anger among those seeking equal rights or simply a better world percolated. Some of our most famous comedians emerged from these movements.

Lenny Bruce, who some consider our country’s greatest comedian, railed against the established order. So did another comedy icon, George Carlin. Both thought we shouldn’t make so much fuss about using “dirty words,” and didn’t mind getting arrested for obscenity charges to make their points.

Carlin and his "seven dirty words" comedy routine were at the center of a 1978 Supreme Court case. The judges eventually affirmed the government's power to regulate indecent material on the public airwaves. But cable television is outside that definition, meaning that today’s comedians, such as Jon Stewart, can use any one of Carlin’s words to vent his spleen.

But just because he can, should he?

During the late 1960s, the Smothers Brothers Comedy Hour was one of our more popular television shows. Brothers Tom and Dick, being firmly against the Vietnam War, used monologues, skits, and music to express their views. Despite the divisive topic, their profanity-free shows appealed to all generations, something Tom Smothers still remembers.

“I run into people who ask, ‘Don't you wish you guys had a television show right now? You could say anything you want!’”
“That's an illusion, isn't it?” he asked. “The language is there. You can say any language you want ... you can talk about violence, graphic sex. But I'm not hearing anything being particularly said. And if we had a show today…I don't think we could say anything more than we did back then.”

A. O. Scott makes interesting points about the ethics of humor. Sure, Charlie Hebdo has the legal right to publish satirical cartoons, but should they really use their power to jab at France’s disenfranchised and downtrodden Muslim community?

The Three Stooges never faced such complexities, nor did my favorite American comedian, Charlie Chaplin. He worked during the era of the silent film, meaning he made us laugh and cry without saying a word.