COVID-19  In-depth info for Indians in Atlanta/Georgia. Click here
Home > Magazine > Features > Americana: Out of the Closet: A Brief History of the Gay Movement in America

Americana: Out of the Closet: A Brief History of the Gay Movement in America 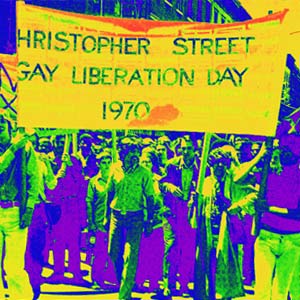 It is 1973 and I am a college sophomore. On a late spring afternoon…

Three of my college friends and I are sitting in a University of South Carolina dorm room playing cards and sipping beers. My room, with its two twin beds, two desks, and a small refrigerator stocked with sandwich meat, peanut butter, and beer, is like most of the others in the all-male dorm. Scattered around our tiny living space is an ample supply of old Playboy and Penthouse magazines. From the girlie magazines to the smell of unwashed athletic socks, our room is lusty and male, very different from the women’s dorm rooms across the courtyard. When the sweet alluring smells from those rooms become too intoxicating, our dorm empties, as we men come together in one of the most American of college traditions, a panty raid. We shout, the women toss, and a pleasant and flirtatious time is had by all.

Our lazy, semester-long, no-one-cares-who-wins card game is interrupted when red-faced Mark S___ from Pittsburgh races into our room and tells us that he has just caught his roommate in bed with another man.

The card game is forgotten, the beers are poured, and an animated conversation begins.

We were no longer voyeurs reading the pages of Playboy and Penthouse; we had become part of a story, connected to an event incomprehensively outside the boundaries of our own desires. We considered the gay lifestyle to be sick and perverse, as did a huge majority of Americans. Why, we did not call gays by that name, we called them “homos,” “queers,” “queens,” “perverts,” or “fags.”

Gays, seemingly, did not exist.

There was not a single gay character in any of the prime-time television shows from the 1960s through the mid-1970s. Oh, never mind the sitcoms. CBS, concerned about viewer feedback, nearly canceled the broadcast of a 1967 news special, “The Homosexuals.” In the show’s introduction, the host, Mike Wallace (of later 60 Minutes fame), tells us that

Halfway into the program we hear Dean Rusk, the United States Secretary of State, say,

We do not employ homosexuals knowingly, and if we discover homosexuals in our department we discharge them. This department is concerned with the security of the United States.

The “average homosexual” is promiscuous; he is not interested in or capable of a lasting relationship, like a marriage. One night stands are characteristic of a male homosexual.

In the 1960s, nearly every state had laws that banned homosexual acts, even if they were performed in private between two consenting adults.

My friends and I talked through our options. Should we notify university authorities? Should we call the police? Should we take the matter up with a priest or minister?

None of us were religious zealots. There were a couple of Bible-thumping literalists who lived on our dorm room hall, but they rarely ventured into rooms, like ours, that were filled with “dirty magazines” and alcoholic beverages. But the five of us, each raised in the Christian faith, knew enough to remember our Sunday school lessons and the admonitions of Saint Paul the Evangelist.

Paul, a persecutor of Christians, appears in the biblical narrative after Christ had died on the Cross. He is on the road to Damascus when Jesus comes to him in a dream and asks him, “Why are you persecuting me?” Changed by the experience, Paul than travels the Mediterranean and preaches the “good news” of the gospel. Those who condemn homosexuality often point to Paul’s writings, such as the following biblical verse:

Do not be deceived: Neither the sexually immoral nor idolaters nor adulterers nor men who have sex with men, nor thieves nor the greedy nor drunkards nor slanderers nor swindlers will inherit the kingdom of God.

For nearly two thousand years Paul’s words and other select verses from the Bible were preached from the pulpit and eventually became an accepted truth in Western culture. Even when we shove aside the religious view, we find that even the medical profession offered the “closet homosexual” little hope.

In 1952, the American Psychiatric Association listed homosexuality as a sociopathic personality disturbance, in short, a mental illness. Homosexuality was something to be “cured.” The possibility that other factors, such as genetics, might cause human behavior was not part of their view. It would take until 1973 for the group to rescind its definition. This reassessment, along with a late 1960’s burgeoning gay rights movement, provided an improved environment for gays to take their case to the American people, and to fight for the legal rights in courts of laws. Opponents of the gay rights movement quickly mobilized, none more famous than Anita Bryant.

In 1977, Mrs. Bryant, a former beauty queen and then spokesperson for Florida Orange Juice, formed Save Our Children, Inc. a political coalition formed in Miami, Florida. Its mission was to overturn a county ordinance that banned discrimination in areas of housing, employment, and public accommodation based on sexual orientation. Bryant claimed the ordinance discriminated against her right to teach her children biblical morality.

“As a mother,” she once said, “I know that homosexuals cannot biologically reproduce children; therefore, they must recruit our children.”

Hers was a well-organized campaign that initiated a national, bitter, and protracted fight between gay activists and highly motivated Christian fundamentalists. When the repeal of the ordinance went to a vote, it attracted the largest response of any special election in Dade County’s history, and passed by a wide margin. The Florida success led to victories in Minnesota, Kansas, and Oregon. Emboldened, Save Our Children took their moral crusade to California and attempted to pass Proposition 6, an ordinance that would have made the firing of openly gay public school employees, mandatory. Then-California governor Ronald Reagan worked behind the scenes to defeat the measure. Harvey Milk was far more vocal in his efforts.

In 1977, when Mr. Milk was elected to the office of San Francisco city supervisor, it was a landmark event in American history, for Milk was gay. During his term, Milk was responsible for passing a stringent gay rights ordinance for the city. He also campaigned against the passage of California Proposition 6.

Anita Bryant and the Save Our Children organization faded away.

In 2009, Harvey Milk was posthumously awarded the Presidential Medal of Freedom.

In 1973, the five of us decided the best course of action for all parties was for Mark S____ to ask his roommate to kindly find another place to live. He did so, the roommate was relieved that we did not call his parents or the police, and the crisis was averted. I am proud that the five of us reached such a mature decision, particularly within the constructs of that era.

In the 1990s, “What Would Jesus Do?” bracelets became very fashionable among Christian evangelicals. What, exactly, would Jesus have said to the two men in 1973?

Jesus could perhaps have told the couple, “Repent of your sin, and go forth in love and peace to serve the Lord.”

Jesus could perhaps have told the couple, “Go forth in peace to love and serve the Lord.”

The debates on gay marriage and gay rights, both in our Christian world and in American culture, continue.