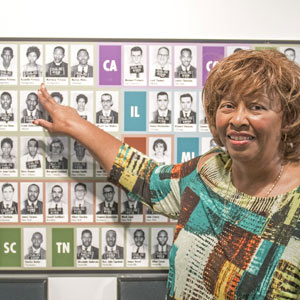 (Left) Prisoner 21242, Kredelle Petway, pointing to her mug shot from the 1960s. She was one of the many courageous Freedom Riders—blacks and whites—who were willing to die for the cause of civil rights of African Americans.

When I purchased my ticket to visit the Montgomery, Alabama, bus station I thought I knew the story of the Freedom Riders, a handful of black and white men and women who wished to accelerate the integration of the Deep South. I did not. All I knew before entering the bus-station-now-museum was that some of those who boarded the buses in 1961 in Washington, D.C., were attacked when they entered Alabama.

And now I know better.

The story did not end in Anniston, Montgomery, or Birmingham, cities where white mobs and the Ku Klux Klan assaulted the unarmed riders. Government protection? What’s that? Montgomery’s city officials and the state’s governor all but flipped their collective middle fingers in the general direction of anyone who dared tell the fine people of Alabama how to run their racist state, including the surprisingly disinterested President John F. Kennedy, and his brother, our country’s Attorney General, Robert Kennedy.

Would I have boarded one of those two buses that left Washington, D.C., on May 4, 1961, hoping to make it to New Orleans?

The bus journeys were the brainchild of the Congress of Racial Equality (CORE), a group deeply influenced by Mahatma Gandhi’s principle of nonviolent protest. CORE’s goal with the “Freedom Riders” was consistent with its past forays: create a crisis so that the federal government would be compelled to enforce the law. What better way to accomplish that end than to send blacks and whites into the still-segregated South, demanding equality as they traveled? On May 4, 1961, thirteen Freedom Riders—seven blacks and six whites— left Washington, D.C., on a Greyhound Bus. A second bus with a slightly different itinerary left a few hours later.

Travel through Virginia was relatively uneventful, as were the miles and times spent in North Carolina. But in Rock Hill, South Carolina, the first group of Freedom Riders encountered resistance. For attempting to enter a whites-only waiting room, two men attacked one of the black riders, John Lewis, a man who would later become the long-term-serving United States Congressman.

The beating of the unarmed Lewis and arrest of another rider for using an all-white restroom attracted the desired national media attention. When the riders reached Atlanta, they met with Dr. Martin Luther King and asked him to join their journey. He did not, telling a reporter covering the story that, “You will never make it through Alabama.”

As Dr. King warned, if the riders thought their travels in Alabama and Mississippi would be a continuation of their mild experiences in the upper parts of the South, they were mistaken. The Freedom Riders, who had been trained not to strike back when pushed, hit, spit on, or doused with liquids, were one hundred miles away from the gates of Hell, and they did not know it.

In Anniston, Alabama, their bus was met by a large mob and the Ku Klux Klan, all of whom acted like they owned the place. Well, actually, they did. The police had conveniently disappeared, as had any other civil authority. When the bus pulled into the station, the bus driver yelled, “Well, boys, here they are. I brought you some niggers and nigger-lovers.”

The bus was then fire bombed, forcing the Freedom Riders to flee from the fire and smoke and into the arms of two hundred men armed with chains, clubs, and pipes.

Not knowing what was happening in Anniston, the second bus rolled into Birmingham’s bus station, and into the same violence. The leader of that group, Harvard educated James Peck, was attacked by five men and rendered unconscious. It took fifty-five stiches to close up his exposed skull. White mobs had even more hatred of the white Freedom Riders than the blacks. The horrific photographs and stories from Alabama made international news.

Shocked at the extreme violence, CORE canceled its plans to send the Freedom Riders to New Orleans.

The movement had died, or so it seemed.

In May of this year, my daughter called. “Dad, would you and Janis like to visit Montgomery? I’ve been reading about the city and Civil Rights museums, and it sounds like an interesting place to tour.”

“You know how I feel about Alabama. In 1969, when dad accepted that transfer to Huntsville, I had to go to high school there…”

“I know of your past issues with the state! Dad, that was forty years ago! Give it up! Let’s go!”

We went, and over the course of a few days, we toured the Legacy Museum, the Civil Rights Memorial Center, and the Rosa Parks Museum. They were as advertised— terrific, emotional, and honest. It was in the shadows of these more acclaimed stops that we found the old Montgomery bus station, now the Freedom Riders Museum. 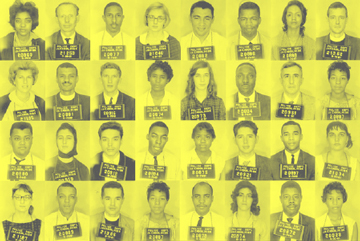 Soft afternoon light filtered in through the windows as I studied the exhibits, particularly the one that displayed prison mug shots of many white and black people, well beyond the couple of dozen I had thought represented the entire saga. Who are all these people? Why were so many locked up in Jackson, Mississippi?

“Excuse me, folks, I have an exciting announcement,” a museum staff member announced to the dozen of us who had happily traded college football games for this historic bus station. “One of the Freedom Riders is visiting Montgomery this weekend and has offered to drop by and give a short talk. Are you interested?”

In less than fifteen minutes, a black woman, Kredelle Petway, entered the museum and began talking about her experiences. It seems that the Freedom Movement continued, even after CORE withdrew its support. Kredelle, her brother, and their now deceased father participated by boarding a bus from Montgomery to Jackson, Mississippi. Upon their arrival they were arrested and tossed in jail.

Historians properly point to the determination of Diane Nash, a Civil Rights leader in Nashville, for her role in restarting the freedom rides that CORE had cancelled.

“We can’t let them stop us with violence. If we do, the movement is dead,” she argued. The determined John Lewis was one of the ones who agreed. On May 17, 1961, seven men and three women rode from Nashville to Birmingham, only to again encounter horrific brutality.

And it happened again, and again.

Freedom Riders arrived in Jackson, were arrested, tossed in jail. Soon, Mississippi’s prisons were overflowing, and not just with blacks. Ordinary white people from all over the country bought their tickets to Mississippi. Jews, Catholics, and Protestants and those who just wanted to correct a wrong joined the black people in Mississippi’s miserable prisons. Later, the Reverend John Crocker, Jr. recalled,

They threw us in jail. The first job that needed to be done was cleaning the toilets, and I was an expert toilet cleaner. And then in the middle of the night when we wanted to communicate— they segregated blacks from whites—we communicated by singing hymns at the top of our lungs. We could just hear them off in the distance, and they could hear us.

What really got me to go, aside from my belief in what people were doing, were the young black men I met while working in the CORE office, men from Mississippi who had been on the front lines. They were young. They’d been kicked and beaten and jailed…
I had never met anybody like them. They were completely uncynical. They believed in democracy in a way I never thought about it. They believed in things I took for granted and they were willing to die for it and there was something—I start to cry when I think of these men. There was something about them and their sweetness and their commitment.

“Kredelle, may I take your picture by your mug shot?”

And so I snapped my photo of prisoner 21242. At first I thought that the museum should caption the mug shots with the names of those who fought the injustice, but now I think not. Let this wall be a memorial to those anonymous Americans who know the difference between right and wrong and risk so much for the cause.

On November 1, 1961, six months after the first bus had left Washington, D.C., a new law was passed that banned segregation on interstate buses and any accompanying accommodations, including rest rooms, waiting areas, and restaurants.

Sometimes we, the people, have to tell the government when we have had enough.