Americana: The Pearls and Perils of American Nostalgia 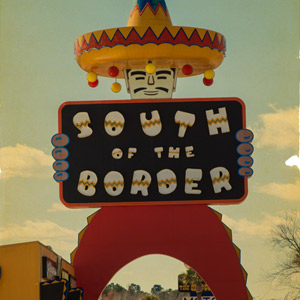 (Left) Childhood nostalgia usually makes things grander than they really are. “South of the Border,” the famous South Carolina landmark, was a thing of marvel and endless fascination for the author as a child—now, not so much so.

I parked my car and looked around the nearly empty parking lot. I had not stopped at South of the Border to check into one of the motel rooms, drift into one of a handful of their gift shops, eat at one of their Mexican-themed restaurants, or even to visit the signature item that used to draw millions of tourists, a large observation tower that is shaped like a sombrero.

Paul Simon, of Simon and Garfunkel fame, once wrote a beautifully wistful song about searching for a long gone America, and that’s why I’m here. I am tired and want to return to simpler times, even if that time is dimmed by fifty years of nostalgic haze.

Five decades have indeed passed since I last visited South of the Border. Mom and Dad didn’t have to announce to their ten-year-old son or his three sisters that “We are here,” for we had been searching for Pedro’s world famous sombrero for hundreds of miles.

In the suffocating humidity of that Dillon, South Carolina summer afternoon I made my way toward one of the shops selling cheap Mexican trinkets. Maybe one of them would have a tiny, lacquered toy cigar pipe, just like the one dad had bought me during one of those childhood visits.

Were those happier days back in the early 1960s, or has my life been an illusion?

In my mind’s eye, I hear us shout, “There he is!” when my sisters and I see dad walking out of the IBM plant in Poughkeepsie, New York. “Dad, dad, over here,” we’d scream, until he spotted us. “Hi kids,” he’d say, but not much more as he eased his way behind the steering wheel of a blue, 1957 Ford Station Wagon. He would work for IBM for thirty years and collect a generous pension check when he retired. My 97-year-old mom uses that money to pay her bills.

“I have to go!” I would tell my friends upon hearing the clang-clang-clang of a large metal bell, the signal from mom that her four scattered kids were to return home for dinner. I’d run home to a dinner of ham, white boiled potatoes, and a vegetable. We talked to each other about everything, and nothing. After dinner, a half hour of television was allowed, and no one worried about the content.

“Billy, we live in the greatest country in the world and opportunity is everywhere. After you graduate from college, go live your dream.” No one and every one said those words, from the barber who cut my hair, from the Little League coach who taught me how to throw a curveball, and from the Korean priest who says God has blessed our country above all others. When I graduate from the University of South Carolina with a Master’s in Business Administration, I am wrapped in the American flag, and of the future I have no doubt.

Oh, dear God, if it were that easy.

Welcome, my dear friends, to the pearls and perils of American nostalgia!

Are you confused by the popularity of Donald Trump? Do you wonder what comparative era he has in mind when he speaks of “Making America Great Again?” Well, I have your answer. He is selling nostalgia and many of us, including me, are attracted to his message. Why wouldn’t we be? Fifty years ago, times were good! Why shouldn’t we return to those days of roll-up-your-sleeves-and-stop-your-whimpering traditional American values?

Ah, sweet nostalgia, were things really as good as I remember, or are you an illusion, a trick of the mind, a warm breeze that muddles the brain?

In 1688, nostalgia was described as a “neurological disease of essentially demonic cause.” In later centuries, it would be called an “immigrant psychosis,” a form of “melancholia,” and a “mentally repressive compulsive disorder,” among other pathologies. In 1999, our views on nostalgia finally changed when Constantine Sedikides told his friend, a clinical psychologist, that he often yearned for the past. “You are depressed,” he was told, but Dr. Sedikides didn’t think so. He decided to study the “disease.”

Among his early findings, he determined that nostalgia is a universal phenomenon.

The redheaded boy who remembers playing catch with his dad in Poughkeepsie will hold that day dear, just like his counterpart in Pune. The Atlanta girl who makes the winning shot in a basketball game will tell of that story much later in life, as will her sisters in Aurangabad. It is the human condition and not a disease to reminisce with friends and family about the same stuff of life, including near and dear vacations, just like the Fitzpatrick family took to Florida from their New York home.

“It’s time to get up,” my parents would say, so at three o’clock in the morning my three sisters and I would grab our blankets and crawl into the back of that blue 1957 Ford Station Wagon. There was no time or money for an overnight hotel room, so my sisters and I would sleep on makeshift mattresses that would later serve as beach floats. During our long journey we’d occasionally stop at Howard Johnson’s, a now defunct but once famous restaurant chain that featured grilled hot dogs on buttered buns, chewy fried clams, and twenty-eight flavors of ice cream. My dad loved ice cream.

Maybe it was Delaware or perhaps Maryland, but along the then new Interstate 95 the first billboards for South of the Border appeared.

Using an immigrant’s broken English, a grinning Mexican named Pedro would ask us to stop at his theme park in Dillon, South Carolina. There were hundreds of these “Pedro billboards” along Interstate 95. As many as eight million annual visitors might have stopped at South of the Border to buy gas, eat, or purchase a piece of memorabilia. From a late 1950s brochure:

Fifty years ago it was so American to travel on this stunning new highway system that ran from Florida to Maine, to eat ice cream at Howard Johnson’s, to smell the landscape change from Brunswick, New Jersey to Brunswick, Georgia, to drive in the eerie yellow light of the Chesapeake Bay Bridge Tunnel, and to stop at South of the Border.

Only much later in life would I learn that the Mexican-oriented theme park was the invention of a shrewd Jewish businessman, Alan Schafer. When North Carolina severely limited alcohol sales, Schafer thought he could make a few more dollars by selling beer, “south of the border” in neighboring South Carolina.

The name, “South of the Border,” had nothing to do with Mexico, at least at first.

But when a traveling salesman passed through town with some Mexican trinkets for sale, and Schafer bought the lot and then sold them at a handsome profit, he opened a retail store. When South Carolina Senator Strom Thurmond thought it would look better for our state if Schafer sold some food to go along with those beers, Schafer got into the restaurant business.

Dr. Sedikides notes that nostalgia has another universal element—we are each at the center of our recollections. It is from my unique vantage point that I see events around me unfold, not yours.

Would the Mexican men who once worked at South of the Border, who once all answered to the name, “Pedro,” have the same fond memories as the millions of white people who once visited?

Hey, Pedro, what do you think of traditional American values?

I am older now, no longer that young boy who sees life through the narrow prism of my upbringing. Of those great values I was taught I am certain, but my certainty is not really the question.

To lead a godly life, a minister once told me, it is necessary to answer two questions. The first is, “Where are you?” The second, “What time is it?” The correct answers are “here” and “now.”

I climb back in my car and drive away from South of the Border. I didn’t think it would be as nice as remembered, and it wasn’t.