Americana: The Rise and Fall of the Wild Wild West 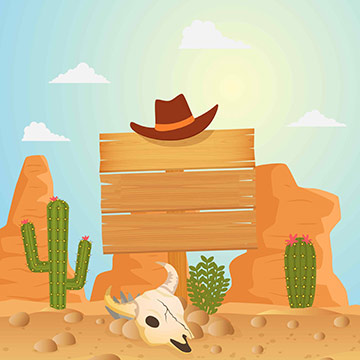 The story of how and why the American West became so legendary, and what caused its demise.

When my parents suggested that after we visited San Francisco, we should “swing by” to see Maurice Culhane in Rancho Mirage, I nearly blurted, “Hey, that’s a two-day haul,” but caught myself. How many more opportunities would I have to spend with my eighty-something-year-old parents? And I also wanted to meet Maurice. Despite being dad’s first cousin and the best man in their 1942 wedding, they had somehow “lost track” of Maurice and now wished to reconnect.

Maurice lived in a very rich neighborhood, which mom thought surprising, given that he was on his own when he was sixteen years old. Dad was not willing to admit that Maurice even lived in Rancho Mirage.

Never mind all of this idle speculation, I said, we have a decision to make. After we visit San Francisco we can head to Rancho Mirage via California’s scenic Pacific Coast Highway, or we go east, cross the Sierra Nevada range in the Lake Tahoe area, and then head south on Highway 395. This route will add a day to our trip but it will allow us to experience much more of the old West.

Mom immediately offered that ever since she was a little girl she wanted to visit the Wild Wild West. Dad said, yes, same with me. Me? I already had the maps and stops in hand. Sure, I had traveled in the American West before, but usually to places that have been tamed by air-conditioning, subdivisions, and sprinkler systems.

The Wild West of my youth, of our country’s youth, is disappearing. But was it ever that Wild? How did this large section of our country—defined as the land west of the Mississippi River—become so famous, not just in America but throughout Europe?

Before the Europeans arrived in the New World, there was no “Wild West.” The many Indian tribes that roamed the West did so in concert with nature. As Luther Standing Bear wrote,

We did not think of the great open plains, the beautiful rolling hills, and winding streams with tangled growth as ‘wild.’ Only to the white man was nature a ‘wilderness’ and only to him was the land ‘infested’ with ‘wild’ animals and ‘savage’ people.

To properly frame the West, it helps to remember that just thirteen states existed after we defeated the British during the Revolutionary War, and those were all on the east coast! It was the Spanish who controlled much of our western lands well into the early 1800s. And their view, just like those of the British and French, was that the Wild West was a land to be civilized and exploited.

According to David J. Weber, the Zunis, like most Indians, in contrast to the Spaniards, “interacted more intimately with the natural world…and tended to regard the users of the land as possessing greater rights than the nominal owners of land”—owners whose God was outside of nature and who thought they had a “divinely inspired message to subdue the earth.”

Wishing to find cities made of gold, the Spanish moved northward from Mexico into the American Southwest, trampling over the land and its native people in their drive to find the precious metal. In 1848, or a few decades after Spanish claims in the United States had ended, gold was indeed found at Sutter’s Mill near Sacramento. On the first day of our journey to Rancho Mirage, mom, dad, and I stopped at this landmark, the place where California’s famous Gold Rush began.

Does history repeat itself? Americans from the east and people from around the world all raced to the West, hoping, just like the Spanish had for centuries, to strike it rich.

Our first travel night was spent in Lake Tahoe. After dinner, dad gambled, while mom and I attended a concert by a musical group that sang the Beatles standards. Well, hello! As a young boy I never dreamed that someday I would be dancing with my eighty-year-old mother as she sang, “You say you want a revolution,” but here we go!

On the following day, I thought mom and dad would enjoy touring the restored old mining town of Virginia City, Nevada, and they did, but what about Bodie, California, several hours to the south?

“Sure, if Bodie is like Virginia City, let’s stop there,” mom replied.

“No, mom, Bodie will be different. The state of California keeps Bodie in a state of arrested decay, meaning that remaining buildings will appear no better or worse than when its mines closed in 1942.”

A few hours later we arrived in Bodie, once the richest and one of the most dangerous places in the world. “Goodbye God, I am going to Bodie,” a young girl once famously wrote in her diary, when she learned her family would be moving to the godless town.

In the searing heat of the High Plains, we wandered, stopping as it suited to peer through dust caked windows and into the building’s past. Why, look, the undertaker had a line of wooden coffins ready for his next customers. Those bar stools and glasses look ready for an evening rush. Gosh, the schoolroom looks like the one I attended when I was young.

During its heyday, ten thousand people lived in Bodie. The city had a Chinatown, and a Red Light district where “ladies of the evening” sold their goods.

Like tens of millions of people around the world, my earliest impressions of the West came from television. In 1959, ten of our country’s most popular television shows were “westerns.” Seems we never tired of the gun-toting sheriffs, unshaven villains, warmhearted women, and dim-witted Indians, as featured in long running shows such as Gunsmoke, The Lone Ranger, Ponderosa, and Death Valley Days.

But mine was hardly the first generation to be so influenced by fictionalized depictions of the American West.

In 1883, William F. Cody, better known as “Buffalo Bill,” staged an outdoor extravaganza called the “Wild West, Rocky Mountain, and Prairie Exhibition” in North Platte, Nebraska. The show was a huge success. He fiddled with the details until settling on “Buffalo’s Bill’s Wild West,” a circus-like pageant that celebrated Western life. He took the show on the road for four years, attracting upwards of 20,000 people for his outdoor performances. When he took his act to Europe, he again gained great fame.

The allure of the West motivated the Irish poet and playwright Oscar Wilde to travel to Leadville, Colorado. He performed twice at the town’s opera house to mixed reviews.

But when we examine the amount of television shows, movies, stage performances, books, novels, and short stories that have been produced on the American West, we can see that only in recent decades has attention been given to the long and sad story of the native Indians.

South of Bodie we stopped again, this time because a riverbed that was as bare as a stripped-out mine caught my eye. We learned that at the turn of the last century, Los Angeles diverted waters from the eastern range of the Sierra Nevada range into its own urban area.

My trip effectively ended at this dried out river bed, a stark reminder of the conflict and forces that shaped the West. Our native Indians lived in concert with the land and its natural resources, while many of European-American stock believed that God created the land and its minerals for their exclusive use, as something to be tamed.

To mom’s delight and dad’s chagrin, Maurice Culhane and his wife, Kaye, did indeed live in upscale Rancho Mirage. I found them charming, but after an hour or so, found it odd that Maurice and dad had barely exchanged the first pleasantry.

“Maurice and I never got along when we were young, and not much has changed!”

“Dad, I just hauled you and mom for hundreds of miles to visit Maurice! You are eighty years old! Give it up!”

Fifteen years have now passed. Maurice and Kaye died a few years after our visit to Rancho Mirage, and while a few more family trips with mom and dad were ahead of me, the trip to the Wild West would be the last time that just the three of us would travel together.

And we had selected wisely.