Americana: “There’s a Negro in My Classroom” 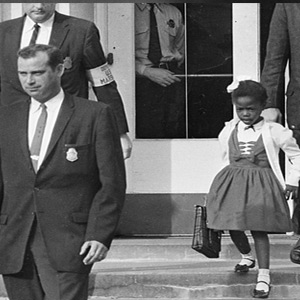 (Left) 1960: Ruby Bridges, one of the first black children to go to a white elementary school after desegregation, is being accompanied by U.S. Marshals.

On a Friday afternoon, the last class of the day was cut short so that we could attend a pep rally for our school’s basketball team. In just a few short hours the gym would fill again when we played the team from Carthage Junior High School.

It was just a game, we thought, just a game, but in the wisdom of the passing years, I have a longer view. We budding white teenagers were unpaid demolitionists, unknowing recruits in the national movement to destroy walls that had taken 80 years to build. Our 1967 game against Carthage would never make national headlines, register a single line in the Raleigh News and Observer, or even be remembered, today, by any of my classmates at Carroll Junior High School.

We were too young to know the game’s social importance and too innocent to care.

Those boys from Carthage Junior High School, you see, were, as they were referred to in those days, Negroes.

Two parallel worlds, one black and one white, one satisfied and the other angry, were about to converge in gyms, schools, and public places around the country. The mid-1960s would represent the beginning of a new chapter in American history and the end of the “Jim Crow” era.

Over five years ago, you and I began our Americana journey. I accepted the assignment of explaining American stuff, thinking I would offer my stories in a rearview mirror sort of way, not imagining that current events would poke and prod their way into my handpicked narratives. Ours would be a relaxed journey, as I would put those otherwise confounding events and trends from our nation’s history in an entertaining and educational framework by drawing on my mom and dad’s stories, my own experiences, and our land’s history and culture.

Today, I cannot write so dispassionately of those events from my past or my country’s past without the angry words of our wall-building, red-faced, I’m-a winner-and-you’re-a-loser president, figuring into my calculations. But I am now of the mind that within a handful of years or maybe mere months, the pendulum will swing in the opposite direction and that we will come to view the nature of this presidency as nothing more than a spot of pigeon poop on the Statue of Liberty. We have torn down far higher walls in our nation’s history than the ones being proposed by Mr. Trump, including those of the Jim Crow era.

Imagine, for a moment, that you are an educated and well-dressed woman from Connecticut, circa 1943. You are recently married, and your husband, like so many of his peers, is now in the army and preparing for war. After he completes his basic training in Camp Croft, South Carolina, he will be dispatched to Europe and the battlefields of World War II. So you, a staunch and proud New Englander, make the your first trip to the American South to spend a few days before he is deployed. So what were my mom’s first impressions of the South?

“Billy, when the train finally arrived in Spartanburg, it was around midnight and pitch black. I had to go to the bathroom so I went to the nearest restroom. When I walked inside, all I saw were black women. I had never seen so many black people before. There was not a single white face in the room.

“‘Ma’am, you are in the wrong restroom,’ a woman told me. ‘This side of the building is for colored women.’

“Oh, my! I left as quickly as I could and soon found the white restroom for white women. It was my first experience with racism—we simply never had racial issues in New England.”

I looked at my mom. My dad, when confronted with my mom’s exaggerated stories, would simply say, “Well, Doris, that’s your version!” But instead of challenging my mother, I asked her how many black kids were in her high school class.

The Jim Crow era, named after a fictional black character first appearing in early nineteenth century minstrel shows, began around 1877, or around the time when the federal government ended its post-Civil War oversight and “Reconstruction” of the South. Without the benefit of such supervision, many states in the country soon passed laws that created two separate worlds—one white, one black.


In Arizona, “the marriage of a person of Caucasian blood with a Negro, Mongolian, Malay, or Hindu shall be null and void.”

A Georgia law read, “It shall be unlawful for a white person to marry anyone except a white person. Any marriage in violation of this section shall be void.”

The state of Oklahoma ordered, “The Corporation Commission is hereby vested with power and authority to require telephone companies... to maintain separate booths for white and colored patrons when there is a demand for such separate booths.”

An Alabama law read, “It shall be unlawful to conduct a restaurant or other place for the serving of food in the city, at which white and colored people are served in the same room, unless such white and colored persons are effectually separated by a solid partition extending from the floor upward to a distance of seven feet or higher, and unless a separate entrance from the street is provided for each compartment.”

Such was the segregated life in the American South and a handful of other states, well into the 1960s. Even the landmark decision reached by the United States Supreme Court in 1954—that “separate but equal” is not equal, a reference to the notion that a nice school for blacks and a nice school for whites was not the same as one nice school for whites and blacks—seemed to have little impact in the South. Black frustration and anger reached its apex in the 1960s. When Carroll and Carthage played their game, the streets in some of our nation’s major cities were in flames.

A few months ago, I received the following email:

My name is Helen Rosemond-Saunders, and I am the chairman of the Retreat Rosenwald School Committee. I was at Furman University on Tuesday night, and saw your photograph of the Retreat School. It was awesome! How can we get a copy? We’d like to display the photograph when we speak to community groups. Please give me a call.

The guest speaker at the Furman University was Peter Ascoli, the grandson of the former CEO of Sears, Julius Rosenwald. In the early twentieth century, he, along with the notable black leader, Booker T. Washington, realizing the impossibility of knocking down the walls of segregation in their lifetimes, went about the practical task of building schools for black kids. Over six thousand were eventually constructed, including the Retreat School. Earlier this year, I drove to the small town of Seneca, South Carolina to give Helen the photograph I had taken. I met her aging mom, a 1940s graduate of the Retreat Rosenwald School. The time passed quickly.

I learned of the hardships of attending school—the long walks, outhouses, memorable teachers, handme- down-textbooks, crammed classrooms that were too hot or cold in the days before electricity—but those could have been the memories of white rural school kids of that era, too. Several years ago, I spoke with a noteworthy black Civil Rights leader, who offered that his 1950s era, Greenville, South Carolina, all black high school, was terrific.

But “separate but equal” is never equal.

A decade after the Brown versus Board ruling, President Lyndon Johnson, frustrated at the slow pace of social change, passed sweeping Civil Rights legislation, some of which forced school integration. Goodbye Jim Crow, goodbye segregated schools, and goodbye to those 70-year-old walls. Trump has often been compared to the long-term, now-deceased governor of Alabama, George Wallace, and for valid reasons. Wallace, an avowed segregationist, ran angry populist campaigns for the American presidency.

But I was a kid during the Civil Rights era, too young to understand the outside world. All I wanted was our team to beat the boys from Carthage. Only as I have considered this otherwise unremarkable game do I remember that two blacks attended our school. One, Deborah, was the daughter of our school’s janitor. I don’t know what circumstances caused the other, Willie, to attend our school.

I have vivid memories of the pep rally, but no recollection of attending the game. Today, I am left to wonder if Deborah or Willie attended the game, or better, where they sat. Did they feel part of our school, or not?