Americana: Twilight of the Gods, the 1964 New York Yankees 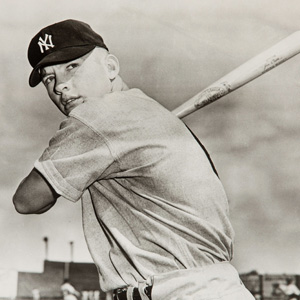 Soon, that iconic cry will be heard in baseball stadiums throughout the land and I won’t care.

I used to care, but that was a long time ago. This is the story of why I no longer care.

A pitch, a swing, and a home run, that is all I saw on our black and white television set on October 10, 1964. As a ten-year-old boy, I was not old enough to see the long afternoon shadows that covered much of the field.

After Mickey Mantle slammed that gamewinning World Series home run, I raced outside to imitate the play. First, I assumed his powerful left-handed stance. Then, with a slight uppercut swing, I gave the rubber ball a solid smack. Satisfied, I placed the bat on the ground and trotted around my makeshift bases, being careful to keep my head down so as not to embarrass the pitcher who delivered the hittable ball, or to draw undue attention to my individual achievement. I accepted handshakes from my teammates as I crossed home plate, and then, with a tip of my cap, acknowledged 56,000 delirious fans.

“Billy, it is time for dinner,” Mom shouted, temporarily ending my fantasy of playing center field for the New York Yankees. I walked off of my field of dreams, determined to be the next Mickey Mantle.

In 1970, I read about this athlete who was an alcoholic, a womanizer, a Peeping Tom, and a pillpopping athlete who sometimes played drunk. His name was Mickey Mantle.

Jim Bouton, who was a pitcher on that 1964 Yankees team, wrote the truth about the Mick and of other players in his 1970 book, Ball Four, one of the most controversial and influential sports tomes of the last century. Violating the long-standing code that “what is heard in the locker room stays in the locker room,” he wrote openly and honestly as no one ever had, and in doing so, stripped the gods of the game naked.

Why, Jim, why, I wanted to ask him, as many others did. What great end do you think you served?

I want sports to entertain me, to divert my attention from the toils of life, if just for a few hours. I do not need or want to know that Mickey Mantle was a womanizing drunk. The reporters who traveled with the Yankees most certainly knew of the Mick’s seamier side, but chose not to write about it. The journalists who covered President John F. Kennedy from 1961-1963 knew of JFK’s numerous affairs, but viewing such as within the realm of the President’s personal life, remained silent.

Beginning in the 1920s, the New York Yankees lorded over baseball as if collecting World Series trophies was their birthright. On the field their players were cool professionals, clinically going about the business of dispatching the opposition.

Thanks to YouTube, I relived Mantle’s epic Game 3 home run in the 1964 World Series. Mick surely knew that more games were ahead in the best of seven series, and that nothing had yet been won. Mantle did not preen, point to the heavens, thump his chest, strut, or let out a guttural roar. I have seen contemporary players do such things, even when their teams are hopelessly behind. The self-centered behavior that crosses into all professional sports, save golf, makes the professional contests borderline unwatchable to those of us with 1964 sensibilities.

The social revolutions of the 1960s changed our country and impacted my beloved Yankees. Young families that lived in the distant suburbs did not want to make that long trip to the suddenly decaying Bronx, even if it meant watching the iconic Yankees.  The “lovable” New York Mets, a zany mix of has-beens and untested rookies, would routinely finish in last place, lose over a hundred games a year, and draw more fans to far more accessible Shea Stadium than the haughty Yankees would draw in the “House that [Babe] Ruth” built.

One of the most colorful teams of the next era in baseball history was the Oakland Athletics of the late 1960s and early 1970s. Led by their remarkable slugger and showman, Reggie Jackson, they were the antithesis of the 1964 Yanks. Instead of classic pinstripes, they wore garish yellow and green uniforms. The players on the 1964 Yankees were not allowed to have facial hair and were told to keep their hair short. The Athletics players were under no such restrictions. Players like Jim “Catfish” Hunter, John “Blue Moon” Odom, and Bert “Campy” Campaneris, with their catchy nicknames, diverse personalities,and feuding ways, caught America’s changing fancy.

Hours before the first game of the 1974 World Series, for example, players told reporters that tales of their infighting were greatly exaggerated. Then Rollie Fingers, he of the handlebar moustache, and Blue Moon started brawling in the clubhouse. Fingers required six stitches in his head. Odom wound up with a sprained ankle. Such common behavior would never have been tolerated with my regal Yankees, but the times were a changin’.

My aging heroes, who failed to win that 1964 World Series against the St. Louis Cardinals, would lose more than half their games the following year. Many other teams had integrated by this era, but the Yankees, thinking their fan base did not wish to see colored men on the field, were late in their efforts. Ten-year-old boys only see players, not color. With the same skill I mimicked Mantle’s swing, I could do the same for Elston Howard, the team’s only black starter. Decades later, I learned that the Yankees never offered their catcher much support. If the hotel was for “whites only,” they checked Ellie into a different one.

In truth, Elston Howard was not the only “slave” on baseball’s plantations.

Due to federal laws, if a player of that era thought he deserved more money, he had little negotiating power with the franchise owner. If a player wished to be traded to a different team, he had to beg and grovel. It was not uncommon for the lesser-paid players of the day to have off-season jobs, just like the rest of us, in order to make ends meet. Finally, in 1975, the courts agreed with the players, paving the way for today’s big money contracts.

In 1965, my Dad took me to a Yankees game. The game lasted two hours, which was barely long enough for me to enjoy a hot dog, popcorn, and Coke. Dad enjoyed two beers. Tickets were a few bucks apiece. The total cost was less than twenty dollars. World Series games were played during the day, meaning if I was lucky, after racing home from school I could watch the last few innings.

In 1998, like the rest of the country, I followed the exploits of Sammy Sosa and Mark McGuire as they both chased a baseball record long thought invincible, 61 home runs in a single season. Babe Ruth of the Yankees held that record for decades, only to be topped by a very decent man who never received his due, Roger Maris of the 1961 Yankees. Sosa, McGuire, and in a few years another player, Bobby Bonds all topped the old record. The nation cheered and then groaned when we later learned that these well muscled athletes had each taken performance-enhancing drugs.

Today, an average game takes three hours to play and a hundred dollars to attend. A really good seat at the new Yankee Stadium will cost anywhere from $500-$2,500 dollars. Wishing to draw the largest possible audiences, most World Series games start at night, or about the time ten-year-old kids should be going to bed. Toss in the long commercials that the cable companies require, and a game that should take two hours takes four. At the major league level, baseball has morphed into big business and big entertainment, and I don’t care for the product.

But I do care for the game and believe in its future. Unlike football, concussions and debilitating injuries are rare. Unlike basketball, regular-sized kids can compete and play, even on a major league level.

On September 26, 2014, an aging athlete approaches home plate. The score is 5-5, and it is the last inning. The regular season game means nothing but sold out. Yankee Stadium is screaming and imploring like it was October 10, 1954, for it is Derek Jeter’s final at bat. For nearly two decades he played the game the way we all want it to be played, with grace, style, and humility. He swings and lines a hit to right field, and the game is won.

I hope that millions and millions of ten-year-old boys and girls saw that play.