COVID-19  In-depth info for Indians in Atlanta/Georgia. Click here
Home > Magazine > Features > Americana: When Harry Met Sally: Can a Man and a Woman Be Just Friends?

Americana: When Harry Met Sally: Can a Man and a Woman Be Just Friends? 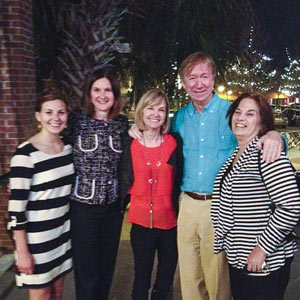 “Your sisters are gathering and your presence is required.”

The cryptic text message arrives once a year without any advance warning or fanfare. My phone beeps and it shows up. That is what it does. It just shows up. It is so completely unexpected that I first wonder if I am being invited to a Gothic ritual complete with intoxicating brews, black-clothed nymphs, and dark incantations. But when I pull myself together, I type: Your brother will attend.

Oh, Ann, Barbara, and Jill, has it been four decades since we roamed the campus of the University of South Carolina? Why, now, at this age when my temple is graying and my hands look like a county highway map, that am I friends with you all, and not my male friends from that now past era? Why do I smile so when I consider this now annual reunion of my gathered sisters, when I know the hugs will be warm and genuine and true, the laughter free and easy? To drink beers with my male friends is to talk of weather and sports,n but such topics will not be raised during our evening of fine wine and food and conversation with you, and I am blessed to have female friends, good Lord I am blessed.

I then call my wife to ask for official permission. She laughs, says yes, of course you can enjoy the company of your sisters, and spend the night in Columbia.

Last month, I came across a recent University of Wisconsin survey on the nature of American male and female relationships. As I sifted through the data, I was reminded of the iconic 1989 movie, “When Harry Met Sally.” In the film, when the two acquaintances learned that they were each moving to New York City from Chicago, they decided to travel together. Along the way, Harry opines that, "Men and women can't be friends because the sex part always gets in the way." Sally disagrees, claiming that men and women can be strictly friends without sex. When they arrive in New York, they part on unfriendly terms.

Is Harry right? Why are relations between men and women in this country so different from those, say, in Muslim countries? Is the camaraderie between American men and women a recent phenomenon with origins in the social revolutions of the 1960s, or does it have older roots? I will offer my views, which touch on religion, politics, culture, and, oh yes, biology.

Jesus has been put to death and his male disciples are terrified. In the gospel of John, we read that a female friend of his, Mary Magdalene, approaches the tomb and sees that it is both open, and empty. Meanwhile, eleven of the men who had followed Jesus during his ministry are in hiding, frightened that they will be found and killed. In the “Greatest Story Ever Told,” the resurrected Jesus first appears not to his male apostles, but to a woman. It is hardly the only place in the New Testament of the Bible where Jesus treats women as important, and equal. The Christian tradition, due to the “turn the other cheek” teaching of Jesus, is often considered softer, less aggressive, a “feminine religion” among the world’s possibilities. The notion that men and women are equal—the basic tenet of friendship—I learned both at home and from my Christian teachings.

In her groundbreaking 2015 book, Founding Friendships, historian Cassandra A. Good writes that men like George Washington, John Adams, and Thomas Jefferson, all had trusted female friends whom they counted on for wisdom and insight. Prior to Good’s work, it had been assumed that no such relationships existed, a myth that she methodically debunks. She writes that our Founding Fathers were determined to rid the country of the “old ways” of Europe, wished to create a new land where all were equal, including women. To do so would mean re-scripting traditional male-female roles, and to the fullest extent possible, in both our founding documents and personal behavior, they did. Wishing to avoid any indications of scandal, their female friends would be invited to dine with the family, or accompany the family to a play or performance.

My mother was born in 1919, the year in which women were granted the right to vote. Like many women of her generation, she went to work in a factory during World War II but quit her work when my dad returned home after World War II. Her job was to raise the family and she did. My dad’s job was to bring home the paycheck and he did, courtesy of the then nearly all-white male world of IBM. I do not recall either of my parents having a close friend of the opposite sex.

The same, most assuredly, is not true of me and how could it be? Why, half of my co-workers in life have been women! How would just a fraction of such relationships not reasonably end in friendships? Working men and women may spend more time with each other than with their spouses, all of which begs the question: Is Harry right, or not? Let us consider a few recent surveys by Dr. April Bleske-Rechek of the University of Wisconsin-Eau Claire.

The University surveyed eighty-eight young adults and found that men have an “unbalanced interest” in their female friends when compared to the women’s feelings for the men. Further, no matter how sexually innocent the relationship, there are still hints of attraction between the friends.

“Attraction in friendship is happening, and it’s persistent,” said Bleske-Rechek. “I’d venture to say based on all our data that in the majority of friendships there’s at least a low level of attraction. And if it’s coming more from one friend than the other, it’s probably the guy.”

The researchers then gathered a group of platonic, opposite-sex friends, and gauged each person’s level of attraction to one another. The participants were also asked to list both the cost and benefit of being attracted to a friend of the opposite gender.

In a separate study, Bleske-Rechek found that middle-aged adults who were attracted to opposite-sex friends were more inclined to be dissatisfied with their current romantic relationship.

“Although middle-aged adults reported less attraction overall to their cross-sex friends than did young adults, those who did report being attracted romantically to their friends were less satisfied with their current mates,” she said. “I think this is a significant finding.”

In both studies, it was found that attraction and flirtation were significant motivators for both men and women to maintain friendships, a finding that was consistent among all age groups in the study. Bleske-Rechek concludes, “Mating strategies may influence people’s involvement in cross-sex friendships to begin with, as well as unintentionally color people’s feelings toward members of the opposite sex with whom their conscious intent is platonic. Platonic opposite-sex relationships are still somewhat new compared to years past, and that neither gender has yet learned how to socially adjust to the change, or how to properly manage the attraction.”

In the spring of 1978, a perky, vivacious young woman walked into the Undergraduate Office of the USC Business School seeking assistance. At the time, I was in graduate school and working in that office helping students, like Jill. From a distance and amidst a sea of white male faces, I see this one attractive woman and make a decision! Out of that chance encounter, a lifetime friendship with Jill and her roommates Ann and Barbara was born. Last month, we did indeed meet for dinner in the Five Points area of Columbia. The stuff of life has happened to all of us since those long ago and innocent days, but among the joys and sorrows of the past four decades, I have enjoyed one very special constant these three female friends—and I am the better for it.