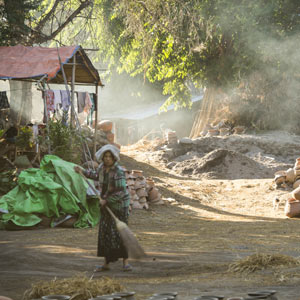 A scene from Yandabo, Burma, from the author’s recent visit there. (Photo: Bill Fitzpatrick)

The promise of America is that nobody is a born loser, but who has never wondered, “Am I wasting my life?” We imagine escaping the mad scramble, yet kick ourselves for lacking drive. Low ambition offends Americans even more than low achievement.
—Thomas J. Wilson, Born Losers

Our group walks on the dirt road toward Yandabo, Burma, each step taking us deeper into the days of ox and cart. “The village we visit makes clay pots,” our guide tells us, as we begin our tour.

My interest in how the village makes pottery lessens when I am taking in the constant motion of its people. Men are hauling straw. Men are stoking kilns. Women’s legs are powering the pottery wheel and their hands are glazing the pots. And then there are the children.

Two skinny girls are playing a made-up game. One tosses her old shoe in the air in the direction of a stake and then sprints after it. The second girl shrieks in delight and then tosses her shoe, too. Back and forth they go, kicking dust into the afternoon’s last rays. I watch until the tour guide tells us it is time to leave.

“Welcome back, sir,” the staff members offer, as I near our riverboat. Now three days on the historic Irrawaddy, I know the routine. I accept a squirt of hand sanitizer from one man and a glass of fresh juice from another. An attendant cleans my shoes of the village dirt.

“Cocktail hour will be on the top deck at six o’clock,” the captain announces to the two dozen passengers. I arrive early.

I photograph a distant fisherman casting his line. Near the river’s edge I watch a woman washing her family’s clothes. I don’t want the sun to set on the tranquil Irrawaddy River and I am not ready to return home to a president who delights in sneering, “What losers,” to those who do not meet his standards.

It irritates me to know that 43 million Americans pay for groceries with food stamps. I am uneasy with the notion of universal health care, at no charge to the poor. “What is wrong with your country that you can’t provide health care to all of your people?” Maureen from Scotland asked me earlier in our trip, not understanding the American view that is held near and dear by millions: ours is a land made up of those who win and those who don’t, and those who don’t, deserve their fate. It wasn’t always that way in our history.

The notion that winning and losing was within my control was instilled at a very early age.

“You don’t want to end up in the poorhouse, Billy,” he’d tell me, without offering any further details, leaving me to imagine that losers lived in this wretched place of horrors, full of moaning men and women, shrieking babies, and cold gruel for dinner. My parents were kind and religious people, but their views were clear and very American: why should those who work and make good decisions pay for those who don’t?

But for much of our country’s early history, there was a separation between a man’s character and his failure in business. One could be an outstanding person, but not be successful in owning and running the local dry goods store. Thomas J. Wilson argues that it was in the formative nineteenth century that the notion of “losers” took hold in America, as the once-held notion that a business failure did not necessarily equate to a character flaw, faded.

An 1852 children’s guide taught that to fail was “to be unable to pay one’s debts.”

In 1828, Noah Webster defined failure as a “breaking, or becoming insolvent. He revised the definition in 1857 to, “some weakness in a man’s character, disposition, or habit.”

Townspeople and visiting notables crowded in to hear the eulogist admit what many had thought all along: the dearly departed had wasted his gift. Neither a deadbeat nor a drunkard, he was the worst kind of failure: a dreamer. “He seemed born for greatness…and I cannot help counting it a fault in him that he had no ambition,” the speaker grieved.

The eulogist was the famed essayist, lecturer, and poet Ralph Waldo Emerson.

The deceased who died with the sin of “no ambition” on his soul was Henry David Thoreau of Walden Pond fame. Hah! If he had been ambitious he might have done far better than his most remembered quote, “The mass of men lead lives of quiet desperation.”

Decades would pass before President Franklin D. Roosevelt, through the passage of his progressive legislation and implementation of his social programs, reduced the stigma of a good man needing help. It would take time. Many movies from the Great Depression era show long lines of humiliated men, heads down and hands out, embarrassed at their need to seek a government handout.

It would also take time for me to change my views of winners and losers.

In sports, I once admired the legendary 1960s football coach of the Green Bay Packers, Vince Lombardi. He is remembered for the quote, “Winning isn’t everything; it’s the only thing.”

I followed baseball teams like the New York Yankees, ignoring the inconvenient fact that because of their wealth they could outspend any other team for a desired player. As a teenager, I never understood the attraction for the “lovable New York Mets,” a team that despite their hopeless bumbling were more loved than my powerful New York Yankees.

My views on winners and losers, consistent with my own upbringing, my circle of educated friends, and traditional American culture, only changed when I left the comforts of my privileged upper middle class world. In the fall of 2011, my latent interest in photography led me to travel on South Carolina’s back roads.

On a cold February morning, I watched two men cry as they demolished the town’s mill. “Why the sadness?” I asked. “Buffalo Mill has been closed for many years.”

“Our grandparents and parents all worked here,” they told me through their tears, “so did so many people in town. We’re being paid to tear down our heritage.”

In the town of Great Falls, I couldn’t buy a coffee on Main Street. Couldn’t have bought a shirt, pair of pants, or a stick of gum for that matter. The downtown business community existed in name only, as all the once full shops are now vacant storefronts. I walked along the city blocks until I found a man carefully stacking fallen bricks inside one of the storefront shells. I asked him why the street, despite the absence of business, was so clean and neat. He said that the mayor and city council wanted to make sure that if any business was thinking about moving to their community, that they’d see the folks in Great Falls had pride.

“Hope we get some business soon,” he said wearily. “A whole lot of our townspeople are hurting.”

I nodded, wondering how different was my privileged upbringing of fine schools, a devoted mom and dad, and a sunny belief that we lived in the greatest country, compared to the sons and daughters born into Buffalo Mill or Great Falls. Few stories are written about the “losers” in American life, such is what Wilson believes, and that sounds true enough. And the winners in American life, well, their reactions to my wanderings are telling, perhaps damning.

Two friends offered, “Your photographs are beautiful. You could make a lot of money if you made and sold note cards, posters, or coffee-table books.” A man who runs a genealogy website, upset that I simply didn’t provide him my collection of historic church photographs, wrote in an exasperated tone, “Well, you could sell a lot more of your photographs if they were viewable on our website.”

The well-meaning people, winners all, did not understand the true value of the journey.

I take my final photographs and a last gulp of wine. The village we visited is now cloaked in darkness. I am sure that the village has its own inequities, but less so than our country. In America, our winners and losers rarely interact with each other. In a village, where the rich man and poor man live side by side, it would be difficult to call your neighbor a loser. You would know better.

I join the others for dinner. It had been a fine day, we all agreed, a very fine day.