Americana: Memorial Day: Remembering Those Who Died for Our Freedom 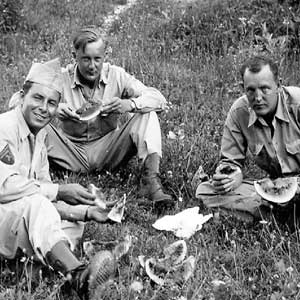 The author's father, William Fitzpatrick, Sr. (center), while stationed in Italy. These World War II men have been described by journalist Tom Brokaw as “The Greatest Generation.”

In the spring of 1972, I walked across the University of South Carolina campus, pushed a quarter into a machine, and pulled out a copy of the State newspaper. I scanned the paper, looking for my birthday and associated “draft number.” I was lucky. The draft number associated with my birthday was a high one, meaning that I would not serve in what is now remembered as the first American “quagmire”—the Vietnam War.

I wish I could write I would have fought like a Rajput in Vietnam, but in truth, I am not so sure—mainly because the war was so unpopular and because many of us failed to understand what we would be sacrificing ourselves for. Some of my generation fled to Canada to avoid the draft, others participated in the many anti-war protest movements that were popular on college campuses. The great American boxer, Muhammad Ali, refused to fight in the war, and lost nearly four years of his sporting career arguing his case in our judicial system. Our parents’ generation didn’t understand our disinterest in fighting this war. To them it was clear: As a citizen you have an obligation to serve your country when called, just like they did in World War II. To many of us though it was equally clear: The Vietnam War was a mindless mess with no clear purpose. So we Baby Boomers clogged city streets and protested it by chanting the now iconic words, “Hell no, we won’t go, hell no, we won’t go!” or held signs that said, “Make Love, Not War.” Even as controversial as the Iraq and Afghanistan Wars have been, they are no match for the divisiveness caused by the Vietnam War. My friends who did serve in Vietnam made it a point to not wear their uniforms


while in this county, so unpopular was the war.

Though we like to fancy ourselves a peace-loving people, this nation has been at one war or another for nearly 100 consecutive years—including the decades long Cold War with the Soviets. No matter our individual positions on wars, even as ugly as the Vietnam, it is pleasing to see that as a country we recognize and appreciate our military men and women’s strength and courage. On May 28th, Memorial Day, we will honor the men and women who have fought in our wars. With this approaching holiday, it’s a good time to review a couple of other wars that have had a lasting impact on American culture and psyche. The Revolutionary War: The birth of “We the people…”


Any country worth its salt has had to deal with those “pesky British,” and so it was with our fledgling country during the Revolutionary War, fought from 1775-1783.

Sure, there were many factors leading to the first shots of the war being fired at Concord, Massachusetts, but contemporary America remembers the iconic “Boston Tea Party.” The British, eager for new revenues, placed taxes on certain goods, including tea. Fed up with the notion of “taxation without representation,” a group of Patriots snuck onto the British ships and flung the tea into the waters.

In another noteworthy incident Paul Revere, upon learning the British army was poised to attack, jumped on his horse and rode through the night in order to warn our local militias. One of the most famous American poets, Henry Wadsworth Longfellow, tells of this great journey in “Paul Revere’s Ride,” a poem that was “required reading” in school, at least in the lower 48 states. The most epic figure of the Revolutionary War was our eventual first president, General George Washington. When all appeared lost, he personally led Patriot troops across the frigid waters of the Delaware River to attack and defeat unsuspecting British troops. His heroics and leadership were to our cause as Gandhi’s were to India.

Great men like Washington and intriguing narratives like the Boston Tea Party dominate Revolutionary War history, but the birth of our country also belongs to otherwise ordinary people, many of whom lived in the Carolinas and Georgia. Few Americans know that more Revolutionary War battles were fought in South  Carolina than any of the other original thirteen colonies.

Recently, I visited one of these otherwise forgotten places. After traveling five miles down a single lane dirt road, I found a long-abandoned church and overgrown cemetery. Also on the property was an historical marker, informing me that the Britishers were defeated in the nearby Battle of Hull. The grounds were rich, the moment special. Such places are the birthplace of our American heritage, a heritage of selfdetermination, optimism, a “can-do” attitude, and the incredible promise of founding documents that begin, not with “We the government,” or “As your king…” but “We the people…”

The Civil War: “The Recent Unpleasantness!”


The staggering promise of a land “With liberty and justice for all…” was nearly lost in the Civil War, fought from 1861-1865.

The issue, according to Abraham Lincoln and the Northern states, was slavery. The president  wanted to abolish it, the Southern states, citing “state’s rights,” didn’t. The South seceded from the Union,  appointed Jefferson Davis as president and established Richmond as their capital. In the interest of brevity I have simplified—some in the North owned slaves, the Western states were divided, and some in the South were against slavery. When the Confederate army finally surrendered, around 700,000 men had been killed, a number that exceeds by as much as 200,000 the combined losses in the Revolutionary War, World War I and World War II.

As a Northern school kid, when the topic of the Civil War was taught, like the rest of our class, I was happy to learn that “our side,” the North, won the war. I gave no more thought to the losing side until my family moved to the South. Ahem, even in progressive Raleigh, “damn” often precedes Yankee! But it wasn’t until the  mid-1980s, when I met Neil Trask, or “Gran,” to his family, that I felt the bitter emotions of the past. I was dating Gran’s granddaughter at the time. “Are you related to the Kennedys?” he asked me after I introduced myself, referring to the one-time President John Kennedy, and his brothers, Bobby and Ted. “Huh? No!” I replied, wondering why he would ever arrive at that strange conclusion. “That’s good. I thought with an Irish-American name like Fitzpatrick, and the fact you’re from the North, that you might be related to the damn Kennedys.”

Gran then shared his memories.

“When I was a young boy, my Grandfather would tell me about the awful things the North did to the South. Told me how that no-good Union General Sherman burned most of our cities. Told me how we fought hard, but the North had more money and better weapons. Told me that when the family heard Union soldiers were on their way, he helped bury our silver in the ground so we could retrieve it after the war.” I listened, astonished at the intensity of Gran’s feelings. The resentments in the South still linger. Today, some in the South won’t even call it the Civil War, preferring instead the “War Between the States,” or “The War of Northern Aggression,” or—and this sounds so “polite” I feel like slipping into a rocking chair and sipping on a mint julep—“The Recent Unpleasantness.” On a happier note, we will honor our World War II veterans on Memorial Day. These aging men, called “The Greatest Generation” by the esteemed journalist, Tom Brokaw, lived through the Great Depression of the 1930s and volunteered to fight in World War II during the 1940s. They served well, the enemies were defeated and national pride hit its zenith. The Memorial Day parades will be fun, the stories from the past bittersweet. The long weekend is also a fine time to visit one of the many memorials or battleground sites. But all of us native born citizens who didn’t necessarily fight in the wars have our stories, too, so ask us to share our views and experiences. The stories will be rich and they will be different, and all are part of our American heritage. [Americana is a monthly column highlighting the cultural and historical nuances of this land through the rich story-telling of columnist Bill Fitzpatrick, author of the books, Bottoms Up, America and Destination: India, Destiny: Unknown.]