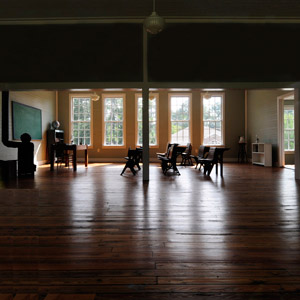 I toss my camera onto the passenger seat of my Toyota, crank the air-conditioning, and then take leave of Newberry, South Carolina. In less than a minute I find the road that will take me deeper into the southern backwaters and toward the long-ago abandoned Hannah Rosenwald School on Deadfall Road. 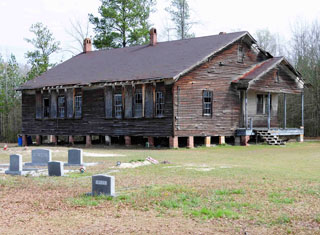 I know, now, and that is why I am driving on this god-forsaken road in this struggling county toward the long-ago abandoned Hannah Rosenwald School on Deadfall Road. I wish to take in the emotions of this forgotten place, and by doing so, honor Rosenwald’s legacy and philanthropy. Just a few hundred of these “Rosenwald Schools” are still standing, which is why, in 2011, the remaining were accorded “National Treasure” status by the National Trust for Historic Preservation. Such a designation should similarly be accorded Julius Rosenwald.

In 1854, Samuel Rosenwald, Julius’s father, left his home in Germany to seek his fortune in America. When he arrived in Baltimore, he had $20 in his pocket, and like many Jews of the era, skills in clothing and retail. He immediately “took to the road” and sold an assortment of goods ranging from watches to thread in the Appalachian region. Eventually, he partnered with another German-Jewish family and opened a few retail shops in the Baltimore area. It was into this solid middle-class family that Julius was born.

In the late 1800s, Julius worked for several companies on several different ventures, none of which were especially profitable. In 1895, however, his fortunes changed when he accepted a position in Chicago with Sears.

When Rosenwald joined Sears, that company and its main competitor, Montgomery Ward, were in the process of revolutionizing the retail industry. At the dawn of the mass-merchandising era, America was still mostly rural, and rural folks depended on the local general store—and its accompanying limited inventories and high prices—for nearly all of their goods. But three factors—the railroad, the telegraph, and “rural free delivery”—changed these marketplace dynamics. In the case of Sears, the increasing availability of rail service made it possible to inexpensively ship “mail-order” goods, the invention of the telegraph reduced the length of time it took to place orders with suppliers, and rural free delivery meant that the thick Sears product catalog could be inexpensively mailed to most households.

Rosenwald’s keen operational mind and personal integrity were of great value to Richard Sears, the founder and consummate salesman. If, for example, Mr. Sears had no qualms about shipping a large blue flannel shirt to a customer who had ordered a red medium, Rosenwald did, and used his genius to find a way to correct such matters. When Mr. Sears finally stepped aside, Rosenwald became president and CEO Top: The Hannah Rosenwald School was one of the staggering number (over 5000!) schools built for black kids, thanks to Jewish American philanthropist Julius Rosenwald. The last Rosenwald School was built in 1937 in Warm Springs, Georgia. (Photo: Bill Fitzpatrick) in November, 1908. During his 16-year-tenure he grew the company and earned a fortune. In 1912, his net worth was around $23 million, or the equivalent of nearly $500 million in 2013 dollars. He was to grow even wealthier.

Many great American fortunes were made during the heady industrial days of the late 1800s and early 1900s. Cornelius Vanderbilt, “Commodore” to his friends, with his near monopoly ownership of the nation’s rail system, achieved a net worth of $100 million. Sadly, he was a cruel capitalist in an unregulated era and held little regard for his employees. On the other hand, John D. Rockefeller started Standard Oil, earned an incredible fortune, and today is equally remembered for his great philanthropy. Andrew Carnegie helped build the American steel industry, a process that turned a poor young man into one of the richest men of his time. Later in his life, Carnegie sold his steel business and gave his collected fortune away to cultural, educational, and scientific institutions for "the improvement of mankind."

In his book, Inside American Philanthropy, scholar Waldemar Nielsen compares and contrasts Rockefeller, Carnegie, and Rosenwald in the chapter, “Three Giants of the Past.” He views Rockefeller as “a strategic or executive donor,” and adds that Rockefeller saw the main task of philanthropy as attacking the root cause of distress. Carnegie “was the most generous of this great threesome,” including a “boosterism for everything in which he was involved.” Rosenwald was “the most committed to making American democracy work in the struggle against racial and religious intolerance.” Nielsen adds that Rosenwald’s philanthropy “was down-to- earth, flexible, compassionate, and people, rather than institution, centered.”

Peter M. Ascoli is on the faculty at Spertus College in Chicago and is Rosenwald’s grandson. In Julius Rosenwald, The Man Who Built Sears, Roebuck and Advanced the Cause of Black Education in the South, he writes that his grandfather was indifferent to the plight of the blacks until 1910. Then, Paul J. Sachs, a junior partner in the firm of Goldman Sachs, sent him two books. The first was Booker T. Washington’s autobiography, Up from Slavery, a narrative in which the famous black educator recounts his life and struggles. The second was An American Citizen: The Life of William H. Baldwin, Jr. by John Graham Brooks. Baldwin, general manager of the Southern Railway, also headed a philanthropy that focused on the education of southern blacks and whites. Rosenwald wrote the following to his two daughters, Adele and Edith:

I just finished An American Citizen and it is glorious, a story of a man who really led a life to my liking and whom I shall endeavor to imitate or follow as nearly as I can. We have a great many views in common—but he, being college-bred and much of a student, had powers of analysis which I lack...He was a good friend to Booker T. Washington and made great study of the Negro problem along common sense, helpful lines…I never read of a more interesting character.

Julius Rosenwald, in turn, became a close friend of the legendary Booker T. Washington. Upon receipt of a proposal from Washington, Rosenwald provided the funding to build six trial schools for black kids in rural Alabama. They were successful and more were built. By 1932, when the construction grants ended, a staggering 5357 new buildings stood in 883 counties throughout 15 Southern states. The last Rosenwald School was actually built in 1937 in Warm Springs, Georgia, to complete an agreement made earlier between Rosenwald and President Franklin D. Roosevelt.

The savvy Rosenwald and Washington requested that local communities raise a portion of the money to build “their school,” and they did. Black women held “box parties," fixing boxed lunches for neighbors to bid on. Families joined to plant an extra acre of cotton or raise hogs and chickens to be sold for the effort. Blacks who owned land might donate the school site. Unlike Carnegie and Rockefeller, Rosenwald didn’t believe in never-ending trusts. Instead, he wanted to spend every last dollar on defined causes—“now”—and he did. In 1948, 16 years after his death, the Rosenwald Fund ran out of money. A decade later, with the move to integrated schools, Rosenwald Schools were abandoned.

I turn right onto Deadfall Road and immediately see a church. Then, on the other side of the road, I see a cemetery. Next to the cemetery sits the fading ruins of the Hannah Rosenwald School. I walk through the cemetery, treading, no doubt, on those whose lives were once touched by an unlikely and now-forgotten philanthropist.

It’s peaceful here at the crossroads. I move around in solitude, taking my photographs.

When finished, I take one last look at the school, and think of the movie, Schindler’s List. In the film, Oskar Schindler, a German businessman, risks his own neck to save the lives of more than a thousand Polish- Jewish refugees during the Holocaust. The movie ends when, decades later, we see a long line of old men and women, along with their children and grandchildren, paying homage at Schindler’s grave site. We can’t line up the millions of black people whose lives were touched by the Julius Rosenwald but if we could, and we could start such a line here on Deadfall Road, South Carolina, surely it would reach past Chicago, and into the very heart of America.