Americana: The Birth of Our Nation 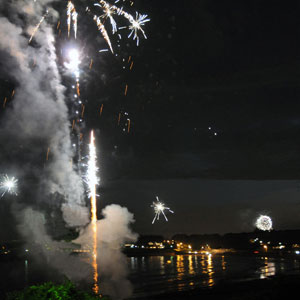 “Give me liberty or give me death!” Patrick Henry, a Virginian, boldly exclaimed, in a stirring 1775 speech. Those words are etched in American culture. Henry would later become governor of Virginia, and is considered one of our Founding Fathers.

On July 4, 1776—about 15 months after Henry's speech to the Virginia Convention—representatives of each of the 13 original colonies signed their names to the Declaration of Independence. By doing so, they committed treason in the eyes of the British, and ignited what had been a series of military skirmishes into a full-fledged war.

The events leading up to the Declaration of Independence are well-remembered in American culture. So, too, are the Northern contributions to winning the Revolutionary War. Less understood and often overlooked are the significant, if not history-changing, roles that the Carolinas and Georgia played during this long and tumultuous era. In fact, I’d wage a Confederate dollar that most Americans think the war never came to the South! We’ll start our American Independence journey with the better known events and heroes.

“Taxation without representation is tyranny,” the colonists angrily shouted in 1765, upon learning that the British Parliament had approved the Stamp Act, a law that required the colonies to pay taxes to a foreign landlord. The imperialists claimed it was only fair for the colonies to help replenish the depleted treasury, because such deficiencies were caused in part by the high costs the British had incurred while defending the colonies during the French and Indian War. That war, fought on American soil from 1756 to 1763, solidified the British holdings in the “New World.”

The cries grew louder when the British announced the imposition of another tax in the Tea Act of 1773. In a famous and iconic event called the “Boston Tea Party,” a group of colonists disguised themselves as native-American Indians, snuck on board the British ships and tossed the crates of tea and hundreds of pounds of revenue into the harbor waters.

Shortly after Henry’s stirring speech, in Concord, Massachusetts, the inevitable occurred. In a “shot heard round the world,” Patriot militia men fired at the approaching British. The rebellion, which to that point had been limited to tea bags, populist expressions, and soaring speeches, turned into a brutal war that would last until 1781.

It is convenient but inaccurate to assume that there was universal support for the cause of liberty. There wasn’t. John Adams, one of our Founding Fathers and our eventual second president, noted that one-third of the colonists desired freedom, one-third were loyal to the Crown and one-third simply didn’t care. To those divisions we should add, “Plus one known traitor.” In 1780, one of Washington’s trusted leaders, Benedict Arnold, sold his knowledge and soul to the British for a post in their army. Thus Arnold secured a prominent place in the American Hall of Shame.

Georgia, which had become the last of the original thirteen colonies in 1732, was seen as being loyal to the crown. Atlanta, at the time of the American Revolution, didn’t exist. didn’t exist. Much of the western Carolinas and Georgia belonged to the Cherokee or Cree Indians.

Into this confusion stepped George Washington. As head of the Virginia Militia, he had led well and fought hard for the British during the French and Indian War. When the Continental Congress asked him to form and lead a new Continental Army to fight the most feared forces in the world—the British—he accepted.

In the fall of 1776, barely two months after the signing of the Declaration of Independence, General Washington and his troops were in New York and in trouble. Needing information about British troop movements, Washington sought a volunteer to spy behind enemy lines. Nathan Hale, a 21-year-old school teacher stepped forward. Tragically, he was caught by the British, convicted without a trial and hung for his crime. His final words are held dear in American history and culture:

My only regret is that I have but one life to give for my country.

The “country” that Hale spoke of didn’t even exist. Instead, he was dreaming of a democratic land, one where the people elect the government and the government is responsible to the people.

In the winter of 1776, in another iconic American moment, General Washington led a surprise attack on the British forces that were stationed in New Jersey, catching them by surprise. What fool, they thought, would attempt to sail across the icy Delaware River in the dead of winter to attack the most elite army in the world? Washington was such a “fool,” and the story of this courageous man leading his brave but ill-equipped troops across the treacherous waters of the Delaware for a successful attack against the British is one of our most patriotic stories.

Despite the rhetoric and heroics, the war was not going well. But in October 1777, at the Battle of Saratoga (New York), the Continental Army defeated the British forces. It was a major victory, one that convinced France that the determined Patriots might be worthy of their military support. In early 1778, such support was announced.

It is at this place in history where the South’s role in the Revolutionary War is sadly overlooked. So before we celebrate the departure of the British and their accompanying taxes, teas and trading companies, let’s set the record straight.

The war that began in 1775 was a military standoff in 1780. Seeking to break the deadlock, the British changed their strategy. Believing that many of the colonists in Georgia and South Carolina were loyal to the Crown, or would convert to their cause upon a proper show of force, the British attacked first Savannah, then Charleston. Their initial efforts were successful.

The rest of their stay in the “land of cotton” was not so pleasant.

As they traveled westward and deeper into the Carolinas and Georgia, they encountered the rugged Scotch-Irish hill people, men whose descendants fled to the colonies years and generations earlier to find freedom from various British persecutions. Many of these rugged people were not about to bend their knees to royal demands. In my mind’s eye, I see a ragged mountain man pointing a rifle at a redcoat as he drawls, “Haven’t I seen you before?”

The Georgia backcountry was called “the Hornet’s Nest” because of the stinging attacks made by the Patriots against the British, Loyalists and Indians. Jimmy Carter, the former U.S. president and resident of Plains, Georgia, used the hornet’s nest symbolism in a 2003 historical novel, The Hornet's Nest: A Novel of the Revolutionary War. The leader of the British military, Lord Cornwallis, noted that he felt like he had entered a “hornet’s nest” upon his arrival in Charlotte, and called the Southern resistance the “toughest of the war.”

The wily patriot Francis Marion came to symbolize the tenacious resistance the British would encounter in their westward journey. Using “guerrilla warfare,” i.e. unconventional war strategies, he’d attack much larger British forces. Then, after inflicting the maximum damage, he and his men would fade back into the Low Country swamps. Aptly, the British called him “The Swamp Fox.”

Eight major battles were fought on Georgia soil, beginning in Savannah and ending with the Battle of Kettle Creek, near Washington, Georgia. Over 100 Revolutionary War battles were fought in South Carolina, a total greater than any other state. Of those fought in the Palmetto State, two in particular, the Battles of Ninety-Six and Cowpens, greatly weakened the British. I have walked the grounds of these now-National Parks, felt that same winter chill, heard the distant approach of the well-trained British troops and wondered what I would have done.

A year later, after suffering a final loss at Yorktown, Virginia, the British surrendered.

In 1783, the Treaty of Paris was signed, the United States of America was born, and the dreams of Nathan Hale and so many others realized.