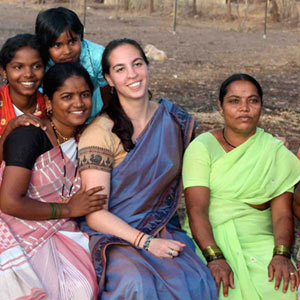 Photo: Lexi Barab with the individuals with whom she worked at the Mabelle Arole Rehabilitation Centre.

Not an accidental tourist’s story but one of charity at the grassroots level.

Jamkhed, Ahmednagar district, Maharashtra. Just another stop in rural India for you and me. This village, though, is currently home base for Atlanta’s Lexi Barab, a 23-year-old graduate of Southern California’s Scripps College and former student of Atlanta’s Pace Academy.

What is a twenty something Atlantan doing half way across the world in rural Maharashtra? Bringing healthcare to the poorest of the poor, that’s what. She is the International Programs Manager at the Comprehensive Rural Health Program (CRHP).

Lexi’s leap to Maharashtra came on the heels of her first study-abroad stint in Denmark, after having designed her own major at Scripps, studying gender health and global development. She aimed for two very different experiences, and the Denmark/India combination sure hit the spot. “Denmark was unbelievable in the sense that I had never seen so much gender equality, so many rights and freedoms, the feeling of safety and not a whole lot of people. Coming straight to India from that was a definite shock.”

The Indian environmental activist and anti-globalization author Vandana Shiva may well have been one influence that pulled Lexi to India the first time around. Having interest in studying abroad in global health and human rights, she was offered programs in Kenya and India by SIT (the School for International Training). “I made a last minute decision to go to India probably because I had been reading a lot about it at the time, [particularly the work of] Vandana Shiva.” 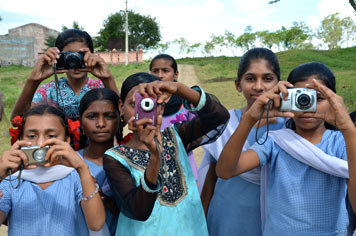 Some of the adolescent girls learning photography.

While studying in Delhi, she was chosen to go to CRHP just by chance. “Compared to everything else we had seen, which included government hospitals and other NGOs, mostly in northern India, and some for-profits/ private hospitals, I was blown away by what I saw at this program and asked the director if I could come back during the summer,” shares an enthusiastic Lexi, as we chatted over Skype. The summer between her junior and senior year, Lexi went back, thanks to grants from her school, and did a photojournalism project with the women at the rehabilitation center. She did return to school for senior year of college but two weeks after graduation, she was back at the program and has been in Jamkhed since!

“The first time I came to CRHP was as a longterm visitor with a specific project to work on, but this time I see myself having more clearly a job here, and responsibilities. If I see something that needs to be done, I need to be the one to take the initiative to do it, and I have that ability,” she adds. Lexi works directly under Ravi Arole, Director of Operations at CRHP and son of the founders. Founded in the 1970s by Drs. Raj and Mabelle Arole to bring healthcare to impoverished communities, CRHP has won The Times of India’s Social Impact Award for Healthcare and the Mother Teresa Social Justice Award, among others. Pioneering a replicable comprehensive approach to sustainable community-based primary healthcare, known as the Jamkhed Model, CRHP has become a leader in public health and development in rural communities in India and around the world. 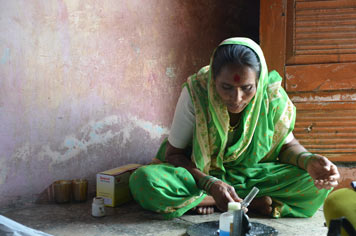 Rhambabai, one of the trained Village Health Workers.

An average day might see Lexi working on a gardening project on campus demonstrating how individuals in the village can grow food for their own family on small plots of land, or spending eight hours straight with the adolescent girls doing activities together. Other days she might spend hours on her computer, working on fundraising and emails or going out with the global health team to different project villages and working with the other interns and volunteers. “I work on fundraising, created a gift catalog online, work with international visitors who come here, work closely with the adolescent girls program. I am trying to start a bee-keeping project that will integrate the farm and the rehabilitation center. I do promotional materials, special projects, tours…” she rattles away endlessly when asked about her work. “Every day is different and that is what I love about being here.”

And what does she do when not working? “Every day I go on a walk outside campus for about an hour. I also try to find time to read books and watch documentaries with the other interns. I love my work, so most of the time I would rather work on a project than play.”

Notwithstanding the fact that crimes against women have taken center stage as an issue in India, Lexi says, “Never in India have I ever felt less safe in a situation than I would have in the United States or elsewhere. That said, I never go out alone at night regardless of where I am. I spend the large majority of my time on campus, which is extremely safe. I live with everyone with whom I work. I go into town alone at least once a week, but that also is extremely safe.”

Lexi lives in shared accommodation provided on campus at CRHP in Jamkhed, a good six to eight hours’ drive from Mumbai. As a volunteer, her housing, food, transport, and medical expenses are covered while she lives and works there for free.

She is very much at home this second time round in Jamkhed. “I can read and write the Marathi and Hindi script, I speak a tiny bit of it but the social workers here speak English. CRHP has been working here since 1970 so they are very used to foreigners that come and go and look different. The first time I was here I became very close to the women at the rehabilitation center. I really want to be more connected with them with the bee-keeping project. They are all wonderful and they really like it when people are here for longer than just one or two weeks. I was lucky to be able to come back at a time that people still remembered me and the work that we had done so it was a good transition to come back and work with the social workers again.” 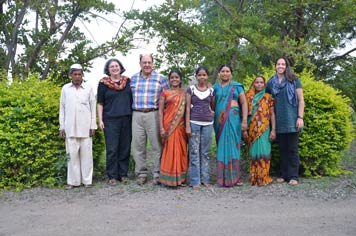 Lexi with her parents, at the farm.

Parents Benita Baird and Ron Barab have been very supportive of their daughter’s efforts and even visited Jamkhed in October 2013 for a glimpse into the life Lexi lives and breathes every minute in India. Benita, a retired lawyer who now manages a legal placement firm, and Ron, also a lawyer, have lived in Atlanta for 35 years. “We were able to see firsthand the amazing impact CRHP has had on the health and lives of hundreds of thousands of people in villages in Maharashtra as well as in other underserved communities throughout India and the world,” said Benita, about their week-long trip learning more about the organization, and how it has changed the lives of villagers in a part of rural India many have no awareness of.

Before her parents visited her, Lexi was understandably anxious about how they’d react to the conditions she lived in. But she needn’t have been. “My parents had never been to a developing country before, and I was worried to have them come because CRHP is not the kind of organization that takes people from their villages and puts them in houses with bathrooms that look like the West. The villages still very much look like villages but there isn’t water all over the road or mosquitoes everywhere. The standard of living and the health of the people are so much higher. I didn’t know if my parents would be able to recognize it coming here for their first time. I…wanted them to love everything as much as I did. But they came and they were very enthusiastic; I was really proud of them. We walked around with village health workers in the villages and they sat around, drank chai, and asked a lot of really great questions. It was wonderful to have them here and they loved everyone as much as I do.”

Ruksana Hussain is a communication specialist and freelance writer based in Atlanta.  For more on CRHP, please visit www.jamkhed.org.