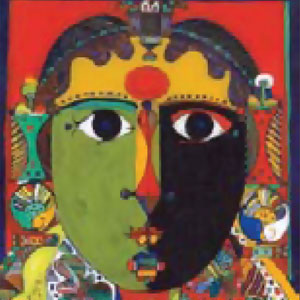 Long before the world became aware of contemporary Indian art, the National Gallery of Modern Art (NGMA) in New Delhi was showcasing the ‘moderns’ and providing inspiration to artists.

Jehangir Sabavala creates a world and a mythology of his own, so much like poets. He presents us with nearly barren landscapes, cloud formations above them that admit a white sear of light; in this light, dunes, serrated by wind, spread out towards unclear horizons or mountains that look as though they have never been visited. Somewhere in these landscapes are human ﬁgures, hooded and in shroud-like cloaks, who embody the beautiful biblical phrase, “men like trees, walking.” One cannot really judge whether they are moving at all, and if they are, whether they have a destination, or a reason for their movement.

Many of his landscapes—devoid of human ﬁgures and, with austere emptiness, denying any human existence—are mysterious in that they become alive under his brush: rock becomes ﬂesh, veined with water, eyes open in petriﬁed wood. Sabavala’s imagination in recent years has also been inhabited by robed, alopecic ﬁgures, squat or elongated, which are recognisably human. Gentleness and bereavement appear in their movements, in their expressions. They seem, in some way, to be on a mission, to be healers or carriers of important information.

The maverick of Indian art, the artist, writer and thinker Francis Newton Souza was a class apart. You could always marvel at the mastery and facility of his line. This work on canvas has a freshness and immediacy about it that is so pristine—and enthrallingly powerful. The killing and the symbolism of Eros become Souza’s powerful imagery from myth, widely independent and fully realized in a distinctive idiom and style that Souza created for himself, apart from the market. He wrote on a number of issues and techniques. “Drawing is the school of hard knocks the artist has to go through before he or she can come into the bright sunlight of color.” - Francis Newton Souza, 1983, from Francis Newton Souza: Bridging Western and Indian Modern Art.

A closer look at this work exhibits a rawness and a zeal which reveal this Indian artist’s incomparable talent as a draughtsman, which provided what he called “the structure of my iconography”—a structure present in all his work, whatever the medium.

There is some justiﬁcation in calling Souza the “Picasso of India,” and the NGMA’s decision to acquire a piece by Souza’s hand, as well as a piece of history, holds it in good stead.

Sudhir Patwardhan’s “Accident on May Day, 1981” is a passionate reﬂection of the painted ﬁgure who is always a bearer of mystery, because it will not put its presence into words. But, wordless as they are, Sudhir Patwardhan’s painted ﬁgures activate a response in the viewer, extend an invitation to converse. In that invitation lies the hope of communication and community, the hope that we may yet defeat the claustrophobic and isolated self-deﬁnitions into which a linear history has thrust us. The critic Kamala Kapoor says: ‘In any discussion of contemporary Indian art, the signiﬁcant contribution of Sudhir Patwardhan is undeniable. He belongs to the openly eclectic generation of artists born in the ’40s whose sociopolitical commitments seem to have been best realized in their work through ﬁguration.’

As a young painter Rameshwar Broota’s anguish at the suffering he saw in society was forcefully expressed in early works like “Transplantation,” via colorful and humorous depictions of anthropomorphic apes representing the pillars of society. Broota’s imagery later shifted from the “Gorilla Man” to the “Primordial Man.” In the 1980s the artist embarked on the existential “Man” series, exploring an almost Darwinian study through the ages which charts the struggle for survival.The male ﬁgure has played a central role throughout the artist’s career, becoming a site for conﬂict and its resolution in Broota’s themes. “Face,” produced in 1993, is one of the last from his “Man” series which plays tribute to an injured man, perhaps a warrior, whose brooding stance and statuesque quality make him appear fossilized; frozen in time and space. The ﬁgure exudes strength against the odds and looms from its dark surroundings with a translucence of dignity.

Laxma Goud derives inspiration from his childhood in rural Andhra Pradesh, India. The ﬂora and fauna are typically lush and wild, and his tribal men and women are clad in colorful lungis (unstitched lower garment, traditionally worn by men) and saris (unstitched garment traditionally draped by Indian women) and bejewelled with traditional tribal ornaments. Though he portrays scenes from daily life with common folk, his works are highly stylised to reﬂect a sort of fantasy world. Goud has experimented with various types of media, from traditional oils, to watercolor, pen, ink, colored pencil and etchings.

This particular work pays supreme attention to detail. The artist does not leave a single space uncovered. The young girl gazing demurely yet seductively is executed with meticulous deliberation against a background in a multitude of colors. The division of her face, the bindi (a forehead ornamentation used by Indian women) which festoons her forehead, everything becomes a context of cultural synthesis.

S. Nandagopal, son of K.C.S.Panicker, is a narrative sculptor. He has long been part of the Madras movement of frontal sculpture. His work may also be described as anecdotal sculpture, as it recalls motifs and moments rather than narrative whole tales. His sculptures have a wide range of references from Kangra miniatures, Tibetan scrolls, Jain inscriptions, and ancient Tamil Nadukkal war memorials to his daughter’s violin lessons.

There are no straightforward transpositions. His Krishna’s ﬂute ends in a ﬁsherman’s tackle, pulling a writhing ﬁsh out of the river. The cat mimicking Arjuna’s penance metaphorises the magniﬁcent Mamallapuram panel for contemporary times. A bull springs on the warrior from a bridge of ladles. A tree of spoons supports a monkey’s somersault. “Haven’t you seen ladles with concentric rings and a naga handle (snake handle), burning camphor before the temple deity?” he asks.

Nandagopal has worked steadily to realize his own vision of sculpture, often at variance with established ideas and techniques. Sheet metal was his chosen medium, and frontality (as against three-dimensionality) the idiom. “When a temple deity is taken in procession, what you see is a frontal image,” he explains. Seeking to infuse that power into modern metaphors became a passion, so strong that it withstood criticism and the initial dismissal of his work as more craft than art, decorative, even iconic. Inﬂuenced by Madras sculptors V. Janakiram and Dhanraj Bhagat, Nandagopal wanted to merge their stylistics, “the tension rising from the contrast between the ﬁgure and the abstract shape. Mine is not junk or found sculpture. It is orderly, designed, planned.”

To create stone works that enshrined the harmony of the material and also held on to his roots, the senior sculptor Nagji’s works amply draw from the motifs of the rustic village life where spirituality and religion are at the very core of one’s existence. They thus resurface as restructured images of his myriad experiences and perceptions along with visions of local deities, acknowledging the part they play in his culture.

Many more artists are represented in the museum, to be studied and appreciated.