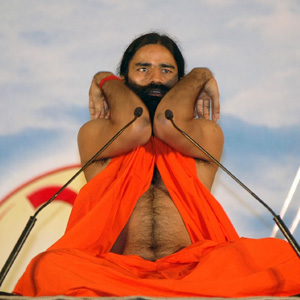 The German-born American philosopher Hannah Ardent contended that a revolutionary spirit of the people energizes the masses into political deliberation and participatory governance. The recent anti-corrup­tion protests in India have united splinter groups and a great majority of citizens to vent collective ire against political élites. The stuff that makes such revolutions an integral facet of a democracy in the Ardentian sense depends on the capacity of individuals to participate in public life in an open and enlightened way, rather than in reactionary or instigative ways.

In this context, the emergence of Baba Ramdev as an icon of the anti-corruption movement is precisely such a free fall into reaction and instigation surround­ing this national concern. His histrionics and his widely televised fast was probably just what the government wanted. Ramdev, a populist yoga guru, was clearly ill-advised to lead such an agitation. His entry merely served to dissipate the gains from Anna Hazare’s agi­tation at Jantar Mantar. Seizing this as an opportunity, the government was quick to exploit the Baba’s naiveté, and to scuttle the demand for an independent anti-cor­ruption agency in the form of a Lok Pal law.

Ramdev’s public resistance, dubbed as the Bharat Swabhiman Andolan, was a quixotic attempt to stir the masses without establishing a coherent agenda to raise the level of debate on corruption. Ultimately his camp reduced it to a satyagraha competition, and the focus shifted to a boast about the overwhelming crowds he could pull.

His letter to the Prime Minister on May 4 demanded the return of unaccounted money parked outside the country. But does the yogi-turned-anti-black money crusader have any idea about what are the loopholes in the Foreign Exchange Management Act and the Re­serve Bank of India regulations dealing with foreign securities that he has in mind? In not doing so he ap­pears foolhardy, as the rationale for his agitation seems without any policy driven objectives.

Add to that his menu of absurd demands, such as withdrawing large denominations of currency notes from circulation, death penalty for corrupt officers, di­rect election to the office of Prime Minister, and pas­sionate pleas reclaiming Indian cultural and linguistic heritage, and you see him as the distraction that he is, rather than an enlightened leader. Assuming even that his intentions may be genuine, his inept actions have only served to add fuel to the angst of the populace, without any constructive outcomes.

To be representative of the people in a democracy, any civic movement will have to be rooted in a process of dialogue that raises public concern in a sustained and systematic manner. The historian and thinker Alexis de Tocqueville reflected on the solidarity and strength of associations in his travels across America to observe that it created a vibrant civil society that func­tioned independently from the State. However, Ram­dev and his disciples are far from that self-conscious association that strengthens the democratic fiber. The insidious ideology that the Baba represents is that of revivalism of a lethal kind. If Anna Hazare’s campaign symbolized a Gandhian type of tolerant ideology, Ramdev represents fire-brand nationalism. It is not strange that the Bharatiya Janata Party sees the Baba as a kindred soul of their fraternity, hailing him as a hero.

Pressured by Anna Hazare’s quiet strength and the Baba’s demagoguery, the government resorted to a series of crafty and sinister counterattacks. The emer­gence of a novice such as Ramdev gave it a perfect han­dle to ridicule and forestall the progress of the dialogue. Mindful of the dangers of an empowered anticorrup­tion agency, the government chose to trade unwar­ranted allegations against the lobbyists and sidestep crucial issues.

The government had preplanned the police action involving lathi charge and tear gas to disrupt the pub­lic meeting at Ramlila Grounds. Its sources, quoted on June 2 observed that Ramdev had sought permission only for a yoga camp in that venue. More than 40 civil­ians were injured and two seriously hurt during the po­lice action on June 4 and 5. The incident showed clearly that the government’s plans were conspiratorial.

Both the yoga guru’s ensuing theatrics and the government’s machinations are suggestive of the issue-skirting problems that beset politics in India. Ramdev’s yatra is just one of a slew of such gimmicks politicians and film actors normally resort to in the election season. In the final analysis, it is impor­tant to see the Baba for who he is—an over-hyped TV star landing himself in the role of a crusader because of the extended arm of politicians, social lobbyists, and the media.

Indeed Baba Ramdev seems to have run his mile of public fame leaving the important task behind him. The joint panel drafting the Lok Pal law has unfortunately disintegrated over contentious issues such as including the prime minister and judiciary within the ambit of the Lok Pal. Notions of parliamentary and constitution­al supremacy make the government unwilling to act. However, these obstacles are a result of the over-pre­scriptive emphasis in the Indian constitution. A threat is perceived the moment a so-called nonconstitutional body scrutinizes a sacred constitutional body. This kind of fear is really unnecessary. Any Ombudsman mecha­nism will have its checks and balances to ensure that it scrutinizes high offices with responsibility.

On their part, the civil society leaders will have to show patience and work towards convincing the gov­ernment without going for a spectacle of any kind. Evi­dently no other country has the kind of Lok Pal that is currently being deliberated.

The systemic change that the proposed law is ask­ing requires a paradigm shift on the part of policy mak­ers. In light of this, the civil society would do better to keep their agitation going but withdraw unreasonable deadlines. A prolonged movement will benefit the ordi­nary citizen who can take strength from the campaign and fight against the corruption encountered every day, since merely a new regulatory body or laws will not magically eradicate corruption overnight.

[The author is an assistant professor of law and assistant di­rector of the Centre for Public Law and Jurisprudence at a lead­ing law school in India. The views expressed here are the author’s own.]