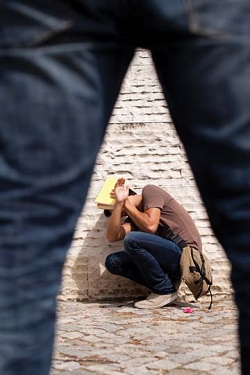 As Sid (Siddarth), 12, was walking to the school bus stop, a sinking feeling tightened the knot in his stomach, reminding him of a past experience at elementary school. In fifth grade, a blond-haired, blue-eyed boy had made fun of Indian women for wearing bindis. Later, three boys had teased him for not knowing the rules of the all-American game, football. At the time Sid had silenced them with the rules of cricket, but this was going to be a hundred times worse.

The middle-school bullies always began their morning tirade of name-calling and jokes at the bus stop. Sid’s suffering continued on the bus ride, on the hallways and sometimes even the cafeteria, ripping his self-esteem to pieces. He returned home every day overwhelmed and overburdened with emotional and physical abuse, unwilling to confide in anyone.

Initially Sid thought he was a target for bullies because of his Indian (ethnic) background. But experts point out that what the bullies perceive as emotional and physical weakness is the determinant factor in how they choose their victims. Deborah Carpenter, author of The Everything Parent’s Guide to Dealing with Bullies, says bullies generally start targeting early, at the beginning of the academic year. They look for victims who are anxious-appearing, new and different. Race or ethnic background may be one of their many criteria but perceived weakness is the key factor.

According to Carpenter, 25-50 percent of children don’t report bullying. Elementary-age children are more apt to reveal mistreatment. “Older kids may want to handle it on their own.” She says embarrassment, concern over a parent’s reaction, exacerbating the situation, a sequence of self-blame and denial might be initial lines of defense.

Parents, on the other hand, may not realize the seriousness. Carpenter says, “In the past, bullying was seen as a harmless rite of passage, a normal unavoidable part of growing up.”

“The bully is seeking a fear reaction, and if she does not get one or she gets an unexpected or undesirable reaction (ignored, laughed at or stood up to), she probably won’t try again,” observes Carpenter.


Sid tried ignoring the bullies for a while, hoping they would go away, but they just got bolder. “Unfortunately the longer the abuse goes on the harder it is to stop,” says Carpenter. “Increased chronic stress causes the victim to become increasingly socially dysfunctional and isolated and increases his chances of being bullied.” This, according to Carpenter, intensifies the bullying. Prolonged episodes can have long-term consequences: full-blown depression or anxiety disorder. Carpenter stresses the need to watch out for long-term feelings of helplessness and hopelessness, since “he may turn to suicide as a way out.”

Parents want to protect their kids from bullies but many are unaware of how to deal with it. Sid’s parents had known something was wrong for a while; his outbursts of temper and nervous tics had increased. An A student earlier, Sid started forgetting things, turning homework in late and bullying his younger brother at every opportunity, but when his parents Shreya and Puneet tried to talk with him they learned nothing, until the day Sid was bullied in the boys’ locker room. The dam burst.

The parents took it up with the middle-school authorities but got little in return. The summer holidays passed, schools opened in fall and Sid was bullied all over again. This time Shreya and Puneet reported the matter and demanded a full investigation. Over 20 students were questioned, three ringleaders were caught, officially labeled as ‘bullies’ on their academic records, and warned that they’d be handed over to the police the next time they attempted to bully someone.

The school authorities identified adult-supervised locations (the offices of the assistant principal and principal) where Sid could go if he ever felt threatened. Both parents met with all of Sid’s teachers and made them aware of the situation. The school in turn also organized a forum to educate children about bullying. Sid’s cooperation had opened the floodgates for a chain of silent victims.

The bullies were suspended for a week but Sid lived with the emotional wreckage for months after.


According to Carpenter, “Emotional effects are the most difficult to see and can often be the longest lasting.” She says if you hear you are worthless, incompetent, etc., long enough, you begin to internalize and believe you are precisely that. Because the bullied child is under a constant level of anxiety, over time his immune system wears down. “He becomes so emotionally and psychologically caught up in avoiding and enduring the bullying that he can no longer function properly in the classroom.”

How do we, as parents, focus on pulling our children out of the sinkhole if they’ve been bullied?
The American Psychological Association suggests the following:
Be Available To Your Children: Talk to your children when they are ready and available to talk. Initiate conversations, do one-on-one activities and take an interest in their world.
Listen: Let your kids know you are really listening. When they talk, stop and listen with interest. Wait for your turn to respond.
Respond In A Way Children Will Hear: Don’t get angry or defensive. Express your opinion without putting down another’s. Focus on your child’s feelings, not yours.
Carpenter suggests developing a strong support system at home, providing unconditional love and a sanctuary for the child. Helping to build your child’s network of friends and being surrounded with peers weakens the impact of bullying.
It is true—sticks and stones do break your bones, but words leave a longer-lasting impact that can hit you forever. As responsible adults, however, we can help break the down-cycle of bullying by standing up for our children, taking the front seat when they need us and driving their lives forward when we have to.
Sid, now a budding freshman at an esteemed high school in Alpharetta, Georgia, asks parents to “spend time with your kids and make sure you understand how they are feeling. If anything is wrong, talk to them about it.” He suggests parents double-check with teachers to confirm what they’re hearing from their child. Sid believes “all kids should tell their parents—otherwise it gets worse. And sometimes it is too late.”
[Anju Gattani is a qualified London Montessori teacher, international freelance journalist and web consultant. She is also the author of Winds of Fire, a women's fiction series that is currently being marketed.]
Sidebar:
The emotional after-effects of a bullied child:
Moody, sullen and withdrawn appearance
Being depressed, distressed and irritable
Unexplained explosive outbursts
Behavior deviant from normal behavior
Being overly emotional, anxious, sad or secretive
Beating himself up verbally. Example: “I’m a loser.”
Sudden obsession with personal safety issues
Shows warning signs of suicide
Source: Deborah Carpenter