Bilateral Relations: What Did Modi's Second Visit to the U.S. Yield? 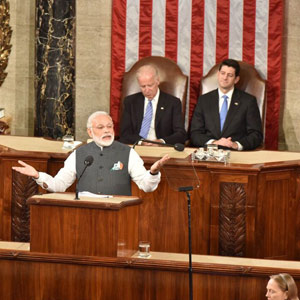 A seminal speech to the U.S. Congress…standing ovations…autographs sought—no doubt Narendra Modi, once shunned, is gaining stature amongst American lawmakers. How does that translate in terms of policies and payoffs? The visit yielded tangible results with India storming into the missile technology group and locking in progress on energy, climate change, and defense—not to mention the big-ticket investments that were announced.

Prime Minister Narendra Modi delivered a well-received speech at the U.S. Congress on June 8 that stood out as uncommon. It was a feat of vision, confidence, humility, and greatness even. Vast in its scope, the speech was a brilliant combination of pragmatism and profoundness.

Modi’s Historic Address
In a stunning turnaround for a man once banned from entering the U.S. in 2005 on religious freedom grounds, Modi became the fifth Indian prime minister to address Congress. He received a series of standing ovations from lawmakers who increasingly see in India a democratic counterweight to China’s rise. It appears Modi has taken note.

“India is already assuming her responsibilities in securing the Indian Ocean region,” said Modi. “A strong India-U.S. partnership can anchor peace, prosperity, and stability from Asia to Africa and the Indian Ocean to the Pacific.”

A joint statement issued after Modi’s working lunch at the White House with President Barack Obama resolved that the U.S. and India would “look to each other as priority partners in the Asia Pacific and the Indian Ocean region.”

In other words, Beijing which has been muscle flexing, will have to live with the presence of America, India, and their allies in the South China Sea and Indian Ocean region. Recent patrols by Chinese submarines in the Bay of Bengal have worried New Delhi.

In an indirect reference to China, Modi touted India’s “respect for global commons and for international rules and norms.”

“SIRI tells us that India’s ancient heritage of yoga has over 30 million practitioners in the U.S. It is estimated that more Americans bend for yoga than to throw a curve ball,” Modi said before landing his punch line.

“And, no, Mr. Speaker (Paul Ryan), we have not yet claimed intellectual property rights on yoga,” Modi quipped, drawing laughter.

In fact, Modi’s substantive address had the right blend of humor, generous praise for the U.S., and gravitas. At any rate, the U.S. lawmakers appeared receptive to his message.

Calling out Pakistan
There were not-so-veiled references to Pakistan’s sponsorship of terrorism.

“Not just in Afghanistan, but elsewhere in South Asia, and globally, terrorism remains the biggest threat,” said Modi. “In the territory stretching from west of India’s border to Africa, it may go by different names, from Lashkar-e-Taiba, to Taliban, to ISIS.”

“But its philosophy is common: of hate, murder, and violence. Although its shadow is spreading across the world, it is incubated in India’s neighborhood.”

“Refusing to reward them is the first step towards holding them accountable for their actions,” said Modi taking aim at generous U.S. nonmilitary aid to Pakistan.

Modi closed his remarks with an optimistic view of ties between India and the U.S., which he called an “indispensable partner.”

The two countries finalized a deal that allows their military to help each other with crucial supplies, and Washington formally recognized India as a major defense partner. Indeed, this development overshadowed the June 16 news about the U.S. Senate rejecting a bill recognizing India as a “global strategic and defense partner.” This is seen as a technical and temporary development in the long drawn process of the National Defense Authorization Act (NDAA). According to media reports, External Affairs Ministry Spokesperson Vikas Swarup noted that preparation of NDAA is a process distinct from the decision of the U.S. Government to recognize India as a Major Defense Partner. And it is this that will make it easy for India to access sophisticated U.S. arsenal and technology to modernize its army and defense manufacturing sector.

“The eight agreements Modi signed were by and large incremental forward steps on some really important issues. India’s growing economy was the foundation of the new India-U.S. relationship, but at this point, the security relationship is the fastest-moving sector,” said Teresita C. Schaffer, a former senior U.S. diplomat, who has served in virtually every South Asian capital and is now a doyenne of Washington’s coterie of India watchers.

Nuclear Supplier Elites
Modi’s meeting with Obama began on a propitious note as the two sides disclosed that India had cleared all hurdles to become a member of the 34-member Missile Technology Control Regime (MTCR), a nonproliferation regime of which China is not a member.

This will give India access to high-end missile technology. The MTCR will also pave the way for India to sell its supersonic BrahMos cruise missiles, which it developed jointly with Russia to third countries. It’s a feather in Modi’s cap, that the development will make India a significant arms exporter for the first time.

With the MTCR membership in the bag, India and the U.S. are now expected to fast-track their discussions on the sale of predator drones to the Indian military.

India’s entry into the MTCR will force China to look more favorably on India’s bid to be admitted to the Nuclear Suppliers Group (NSG).

“If your credentials are good to join in one group then there is a carryover,” said Vikas Swarup, spokesman for the Ministry of External Affairs.

The two sides announced that they intended to complete a deal in which India will buy six AP 1000 nuclear reactors from Westinghouse. India aims to increase electricity generated from nuclear sources from 4 percent to 25 percent by 2050.

“For the Americans, the most important part of Mr. Modi’s visit was his announced intention to formally join the Paris climate change agreement by the end of this year,” noted The New York Times.

The U.S. and India are cooperating on key issues to support Modi’s goal to deploy 175 gigawatts of renewable energy by 2022. “The U.S. and India announced the creation of two innovative new initiatives that together are expected to mobilize up to $1.4 billion in climate finance for Indian solar projects,” said the White House.

U.S. Investments
Modi got a standing ovation from business leaders as he strode into the glamorous neoclassical Andrew Mellon Auditorium. He pitched the high-octane Indian economy as a more attractive investment destination over China, in the current economic downturn.

“I am speaking to you at a time when the global economy continues to be weak. The world needs new engines of growth. It would be nice if the new engines are democratic engines,” said Modi with tongue firmly in cheek.

Amazon founder and CEO Jeff Bezos said that the American online retail giant would invest an additional $3 billion in India, boosting the company’s committed investment in the country to $5 billion.

“This award is a recognition of the fact that we have already created some 45,000 jobs in India and continue to see huge potential in the Indian economy,” said Bezos.

“Our Amazon.in team is surpassing even our most ambitious planned milestones, and I’m pleased to announce today that we’ll invest an additional U.S. $3 billion on top of the U.S. $2 billion that we announced in 2014, bringing our total investment in India to over U.S. $5 billion.”

Bezos said Amazon would open a Web Services Cloud Region in India this year and Hyderabad would house the firm’s largest software engineering and development center outside of America.

Star India, a subsidiary of 21st Century Fox, announced at the summit that it will invest an additional $5 billion over the next three years.

“We see huge potential in the Indian market and have been one of the largest foreign investors in India,” said Uday Shankar, Chairman and CEO of Star India.

Uttara Choudhury is editor, North America for TV 18’s Firstpost news site and contributor to Forbes India. She has been covering India-U.S. foreign policy, diplomacy, and defense issues for over two decades.