Biography: A Prince among Performers 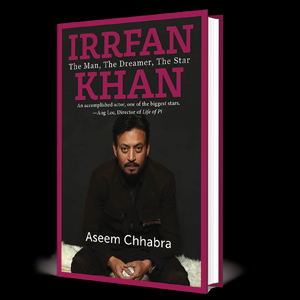 The book (left) was released by Rupa Publications India.

Aseem Chhabra, a New York-based film festival programmer and journalist, has written the biographies of actors Shashi Kapoor and Priyanka Chopra Jonas. Now he is out with Irrfan Khan: The Man, the Dreamer, the Star. Peppered with interviews from Hindi film actors like Naseeruddin Shah and directors like Tigmanshu Dhulia, Meghna Gulzar, Ritesh Batra, and Ang Lee, the book is not just a peek into the life of the much loved, National award-winning actor. It’s also an insight into the world of Bollywood, narrated in Chhabra’s inimitable conversational style. Chhabra spoke to BAISAKHI ROY. 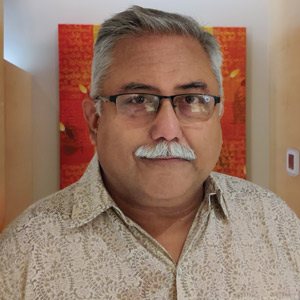 (Right) Biographer Aseem Chhabra is the festival director of the New York Indian Film Festival.
In Sita Sings the Blues, Nina Paley’s acclaimed animated film, he is the voice of Shadow Puppet #1.

I was delighted that you picked Irrfan for your new book and particularly pleased that you called him “one of the sexiest and coolest actors working in Hindi cinema.” After Shashi Kapoor and Priyanka Chopra, how did you land on Irrfan?
His sex appeal was revealed to me in Piku (laughs). What a wonderful character and such a real romance between Deepika and Irrfan! Speaking of this book, my publishers suggested a lot of names, but they didn’t excite or interest me enough. But when they mentioned Irrfan, I immediately said yes! I am a huge admirer of his craft and frankly I started liking him even more during the process of writing this book—the anecdotes I heard about him from his close friends and artistic collaborators, his process, his selflessness as an actor, all these instances in the book give you an insight into the enigmatic man behind the actor. With Shashi Kapoor, I didn’t want people to forget his legacy and hoped that my book would encourage younger generations to seek out some of his fantastic performances—he’s done some great movies. With Priyanka, she was this amazing success story, an achiever whose career arc was quite phenomenal and whose story I felt needed to be told. People who like Irrfan’s work will enjoy the book. Hopefully, the book will also encourage people to discover his cinema and to revisit his many nuanced performances. As I mentioned in the book, we are lucky to be living in the times of Irrfan Khan. 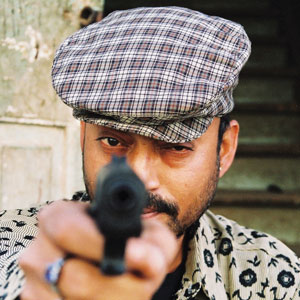 Getting Irrfan to talk at length for this book was a challenge—
Unfortunately, around the time I agreed to write this book, Irrfan announced that he was unwell. His manager informed me that in the past he had been dead against any biographies or even an autobiography—but maybe he was in a different place now and might agree. So I spoke to him. I had already sent an email detailing my proposal. He declined to be interviewed for the book because he wasn’t in the right space just then. But he pointed me to several interviews and articles that he said I could use as reference material. Also he gave me names of people I could speak to about his early acting years, like his friend from his theatre days in Jaipur, Varun Gautam.

The book has a fairly comprehensive account of his professional life and gives the reader so many insights into his personality. What more do you think you could have uncovered, had you interviewed him for the book?
I would have loved to delve deeper into his childhood years but also talk to him about some of his key roles. I was speaking to his Life of Pi director, Ang Lee, who told me how he briefed Irrfan about his role (he plays the adult Pi Patel) in the film. Irrfan’s character is never on the boat with the tiger (actor Suraj Sharma who plays the young Pi is there) but that scene where he is talking about how Richard Parker (the tiger) doesn’t look back and just walks on into the forest, and there are tears in his eyes...it gets me every time! I would’ve loved to talk to Irrfan about how he interpreted that scene and how he performed it.

You call Irrfan a “prince among regular performers.” What sets him apart from the others?
His generosity as an actor. Many people spoke to me about it. Govind Nihalani who directed Irrfan in Dhrishti (1990) noticed how Irrfan was engaging with his co-actors in a play directed by Ramgopal Bajaj. While the other actors looked at the audience for validation and accolades, Irrfan was immersed in the play. That’s him—he thinks of the larger picture; every scene matters to him. Tillotama Shome, who acted with Irrfan in the 2017 hit comedy-drama Hindi Medium, told me about that phenomenal scene where she’s trying to pacify him after his child doesn’t secure admission into a school. That scene was completely improvised, there was a lot of give and take, and that’s Irrfan’s biggest asset. Naseeruddin Shah was telling me about that scene from Vishal Bhardwaj’s Maqbool where Irrfan’s character is holding a gun to Naseer’s character’s head. According to Naseer, Irrfan had the upper hand in the scene but he played it so evenly—he doesn’t overshadow his co-actor he’s sharing screen space with. 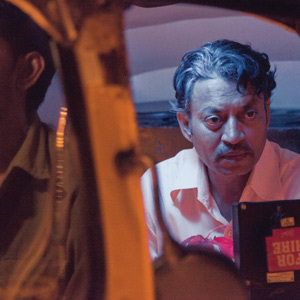 (Let) A still from The Lunchbox. (Courtesy: Guneet Monga)

It’s been a two-year process almost, writing this book. You must have some great memories and experiences.
It was such an amazing journey. I combed through the National School of Drama graduate list where I tracked down Irrfan’s batchmates, one of them being Mita Vashisht, who gave some great stories about their time together at drama school. There was so much joy in revisiting some of his landmark films like Asif Kapadia’s The Warrior, which someone sourced for me as it’s unavailable to watch anywhere. Catching up with theatre director Barry John whom I caught up with at the Dharamshala International Film Festival just as we were rushing in to see a film, serendipitous meetings that led to interviews, getting the structure of the book together was all such a satisfying process. But I will say that chasing some of the directors and actors who had worked with him was a challenge. I know some of them so well, but they still make you chase them (laughs).

Rumor has it, you are on to your next one?
Actually I’m taking it easy for a bit, preparing for a film festival, promoting this book. I was in Kolkata recently for promotions, and I visited legendary actor Soumitra Chatterjee and gave him a copy of my book since I knew he is a fan of Irrfan’s work. He’s so down-to-earth and easygoing, still as charming as ever. I also happened to visit Satyajit Ray’s home and met his lovely family. But I am looking at some potential names for the next book.

Anyone we know?
I’m not saying! I’m not giving away my ideas! 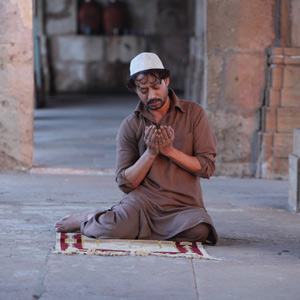 “Directing Irrfan was like working with a friend.” – Mira Nair

“He could tell by looking at my face if I was happy or not with a shot,” she says. She remembers shooting one of the most beautiful scenes [in The Namesake] when Ashoke and Gogol are in a car and the father explains the significance of Nikolai Gogol to his son. “He did that scene very nicely, but I was looking at him like a puppy after that,” she says. “And he asked, ‘Kuch chahiye naa, tujhe (You need something else, right)?’ And I said, ‘Haan, halka sa ankh mein ansoon, magar neeche nahi ana chaiye (Yes, a slight tear in your eye, but it should not roll down your cheek).’ And he said, ‘Theek hai, Mira (All right, Mira).’ I usually don’t talk to actors like this to programme their tears, especially tears that don’t fall. And that’s the scene we have from the second take. That scene required fine-tuning. It looks effortless, but I am sure it wasn’t.”

At times Irrfan would also surprise Mira, like in the scene when Gogol brings his girlfriend Maxine (Jacinda Barrett) to meet his parents for the first time. In one brief moment, the otherwise reserved and fairly conservative Ashoke Ganguly gives an appreciative once-over look to Gogol’s American girlfriend. Sooni had not written that in the script, and neither had Mira discussed anything of this sort with Irrfan. So that was all Irrfan, improvising a little humour into his otherwise serious role. “That brief touch cracked Ashoke’s dignified veneer,” Mira says. “It gave the audience a sense of his vulnerability.”

Mira also has this observation about how Irrfan takes direction. “You talk to him and you notice a quiet moment, when he just reflects on what he has to become. It was not like fatak sey (instantaneously). There is always contemplation. He’s not winning a popularity contest on the set. Tabu does it more effortlessly on the surface. She doesn’t have any acting training and it’s amazing. Irrfan does it more quietly, but he never gets it wrong.”

The Namesake shoot was the first time Irrfan visited the U.S. And Mira invited him to New York City during the prep time for the film and put him up in a hotel in Times Square. “He was completely like Ashoke Ganguli. He was like a beautiful child. ‘Main to study kar raha hoon yaar (I am studying everything).’” Mira also felt leaving Irrfan in the midst of Manhattan was helpful for him to get into the Ashoke Ganguli character. “We didn’t mollycoddle him, inviting him over every day,” she says.

Excerpted from Irrfan Khan: The Man, the Dreamer, the Star with the permission of Rupa Publications India.