Books: An Accomplished Unveiling of India 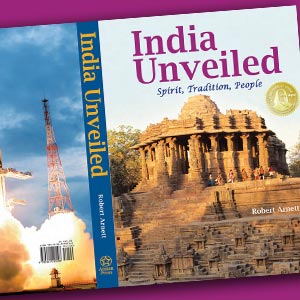 Robert Arnett and his book, India Unveiled, are no strangers to the Indian-American community, particularly that of Atlanta. However, on the occasion of its recently published sixth edition, it is worth revisiting. This significantly overhauled and updated edition is a testimonial, once again, to this Georgian’s labor of love that has produced perhaps one of the finest art books about other world cultures.

India Unveiled, according to its author, is “a tribute to the traditional values of modern India.” To reconcile tradition and modernity, with their inherent conflicts and clashes, is a challenge for any society. To depict it in a narrative about that society is an even greater challenge especially for a writer who grew up outside its cultural milieu and when that society happens to be India, where traditions go back thousands of years. To grapple with the enormity of his task, Arnett traveled to India six times, spending close to two years in the country. Traversing the length and breadth of the land gave Arnett an opportunity to study its past and present first hand.

As Professor Roy Craven Jr. of the University of Florida notes in the foreword, Arnett’s journey that led to the creation of India Unveiled is a “remarkable accounting of one American’s rigorous pilgrimage across India to confirm his spirituality and to search out India’s reality.” This journey is defined by Arnett’s explorations for the sacred in great modern cities and in small villages as well as in remote shrines and ashrams, to be able to capture for the reader, “a complex collage of scenes, sounds, and personalities.”

The book is structured around India’s regional geography. Its six chapters cover the regions of Central India, North, Northwest, West, East and Northeast, and South—each section accompanied with a map showing the location of states in that region. The appendix includes a summary of the British rule In India (1613 – 1947), a “Timeline of India and the World,” as well as a glossary of native terms used throughout the book. Worded in simple language and embellished with breathtaking pictures, taken mostly by the author, the narrative captures the multihued culture of India with feeling and devotion. The range of subject matter is not limited only to famous locations like the Taj Mahal; Arnett is equally mindful to include places that are virtually unknown to even Indians who are unfamiliar with the region. A case in point is Orchha in the state of Madhya Pradesh that houses some of the most historic temples in the country but remains relatively unknown to the outside world. 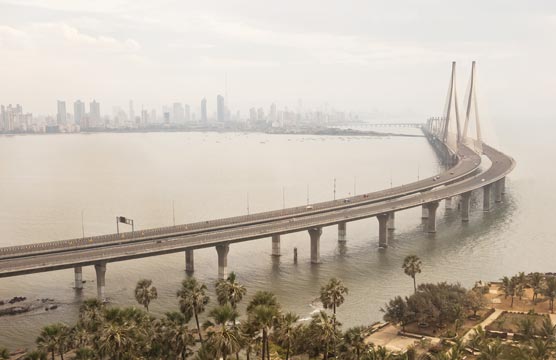 It would be easy to categorize India Unveiled as yet another travelogue or a journalistic diary, but such a comparison would be deceptive. The author’s intent is more complex and ambitious: to portray a nation that is a melting pot of time-honored tradition and modern technology trying to grapple with the “enormous task of balancing the inner peace of the soul with science and technology.” In the process, Arnett blends successfully India’s cultural richness—rooted in its diversity of religion, ethnicity, philosophy, language, and life style—with its growing economic power that is propelling it into the league of the world’s leading nations. 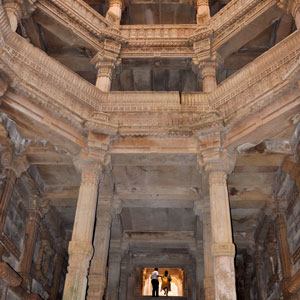 Robert Arnett’s photographs of India’s countless architectural marvels are as captivating as the sites themselves. Seen here are stairs and three stacked octagonal balconies of the Adalaj Stepwell, Gujarat. (Page 174)

A distinguishing and noteworthy characteristic of India Unveiled is the author’s ability to seamlessly merge his personal experiences in India with the historical data, art, architecture, and anthropological details of the places he visited in his travels. For example, to explain the highly complex metaphysical concept of dharma (a word with multiple meanings such as righteous action, religion, and moral law) Arnett narrates an incident from his travels, of a little boy in a small town in Rajasthan, who found his lost wallet and refused Arnett’s offer of a few rupees, because the notion of accepting a reward for returning something to its owner made no sense to the boy. He returned the wallet because it was the right thing to do. Similarly, while narrating the sculptural marvels of the Khajuraho temples, Arnett also describes with glee—and in equally great detail—the meal he enjoyed in a nondescript eatery nearby. Such juxtapositions add color and authenticity to the narrative, sparking the reader’s desire to know more about India’s fascinating complexities. 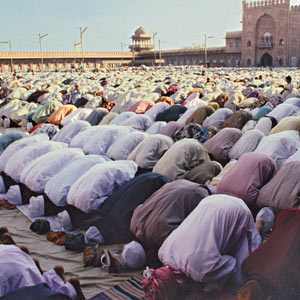 Although the bulk of India Unveiled is devoted to places of importance in Hinduism, the narrative includes descriptions of Christian churches, Jewish synagogues, Muslim masjids, Sikh gurdwaras as well as Buddhist and Jain shrines. Arnett’s reverence for religion and spirituality is evidently not limited to his personal interest in Hinduism but extends equally to the other faiths that together constitute the fabric of India’s syncretic culture and traditions. However, the reader looking for touristy descriptions of pop culture attractions—Bollywood, for example—will be disappointed as these are not within the scope of the book. 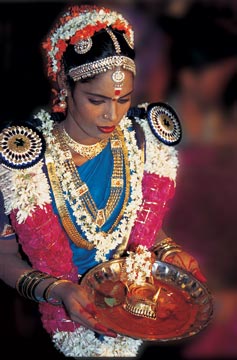 Another challenge a writer on India’s history and social-cultural institutions often faces is: how to deal with controversial cultural issues like the caste system, dowry, and sati, etc.? Arnett handles such topics with sensitivity; however, the extreme care he takes in wanting to remain nonjudgmental is a little too apparent. In his enthusiasm to explain India’s cultural riches and spiritual legacy, Arnett often tends to gloss over the darker aspects of his topics, imbuing everything he observes with a positive, rosy glow. 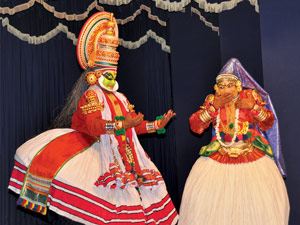 Since the first edition came out in 1997, the book has gone through six editions. Indian society has gone through tremendous changes in the last decade or so. The inclusion of contemporary India is, therefore, a plausible justification for the present expanded edition. Arnett has a more philosophical explanation [in a personal note to this reviewer]: “… the primary reason for most of the changes [in the present edition] is that we are in a higher evolutionary cycle and human consciousness is expanding … This greater understanding enabled me to add material in the current edition… Also I wanted to put into a Western cultural framework for both the Indian-American community as well as Westerners, the universal values of what is called Hinduism—the Sanatana Dharma—the Mother of principles of all religions.” 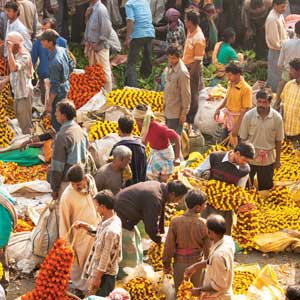 Tradition, people, and slices of lives are captured beautifully through both the camera lens as well as a sensitive narrative.  More than 2,000 flower sellers work daily in the Mullik Ghat flower market, which is over 125 years old. Kolkata (Calcutta), West Bengal. (P. 198)

Arnett states that the revisions and inclusions in the present edition of India Unveiled “[would] enable the Hindu community to share their beliefs and traditions with their non-Hindu friends, neighbors, and children’s teachers in a way all can understand…” In the process, the quality of printing and the material—already impressive in the previous editions—elevates India Unveiled to the ranks of the finest art books about other world cultures. The book was printed in Italy by one of that country’s premier printers who produces books for museums and art book publishers worldwide. Adds Smita Turakhia, the editor of this expanded edition, “While acknowledging India’s modernity, the new edition addresses important topics such as the mother aspect of God, the symbolism of murti and Aum, why Hindus respect cows, and the caste system… .” To accomplish this, the new edition added 84 pages and 43 photographs. 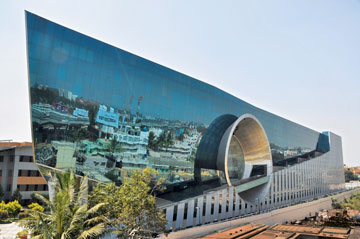 While the book is not so much about contemporary trends or modern India, glimpses of those are scattered, even if sparingly. Infosys building, Bengaluru (Bangalore), Karnataka. (PP 244-245)

India Unveiled is unarguably one of the most up-to-date books on India. For instance, the creation of a new state, known as Telangana, on June 2, 2014 is documented in an insert placed in the book. The revised Timeline adheres to historical data and enhances the narrative’s authenticity. At a time when India’s religious fault lines have been a topic of heated debate, the book’s central theme of religious tolerance, and harmony in diversity, spelled out more clearly in the new edition, forcefully points the way towards much needed global religious and spiritual inclusiveness. 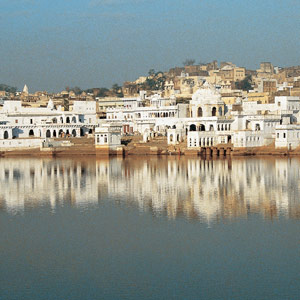 From the quaint and gaudy to the pretty and picturesque, the photographs of India’s landscapes and landmarks are a treat. The Hindu pilgrimage town of Pushkar, Rajasthan. (P. 141)

A happy marriage of the art of storytelling and historiography, India Unveiled is an ideal learning tool for young people growing up in Indian-American families to know about their roots. It is equally beneficial to non-Indian youth, to learn from one of the world’s oldest continuing civilizations. For adult Indian-Americans who often feel the urge to reconnect with their native culture and expand their knowledge and understanding of their heritage and spiritual legacy, India Unveiled would be a cherished addition to their bookshelves.

Dr. Prem Kumar has published extensively on literature, arts, education, and social issues, and is the founder of the Indian American Education Foundation.