Books: Loss and Exile in the Homeland 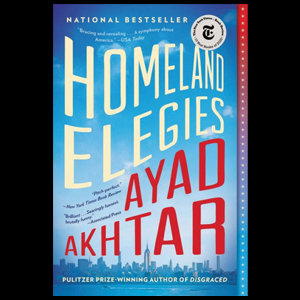 As signaled by the novel’s elegiac title, there is sorrow here and a lament for loss and exile. Akhtar’s parents are dead, their Pakistan is dying, and our America is disappearing in the time of Trumpism, racism and unbridled capitalism. A state of grace is not available to readers hoping for easy resolutions to the conflicts that Akhtar explores in his expansive novel of big ideas. It might merit classification as a “bildungsroman,” but a simpler categorizing word would be “clash.”

The idea of the clash of civilizations was popularized by Bernard Lewis and Samuel Huntington One can read their thesis as an abstraction drained of blood. As a dramatist, Akhtar trades in conflict in a way that has me caring about his characters as if they are my family, friends, colleagues and neighbors; indeed, as if they are a mélange of my own mixed-up, confused self trying to make sense of my mixed-up, confused country. He encourages an unyielding clash that blends the personal and the political: fathers and sons; Muslims and non-Muslims; white supremacists and racial equity activists; liberal progressives and neoliberal capitalists; believers and apostates. Homeland Elegies uses the difficult Trump presidency as an unfettered background to put all this conflict into stark contrast. Akhtar’s gift is his internalization of advice given to him by a college professor who becomes his mentor: “Use the difficulty; make it your own.”

Akhtar—or rather the narrator who is Akhtar’s doppelgänger—absorbs difficulties to become a writer who has learned how to make sense of his world. At its core, Homeland Elegies attempts to settle its narrator in two homes: America and Islam. In dialogue peppered throughout the novel, both places of residence—geographic and spiritual—are found wanting.

“America is not about what they tell you—freedom and opportunity and all that . . . . It’s about racism and money worship—and when you’re on the correct side of both those things? That’s when you really belong.”

“Top five words people associate on an unconscious level with Islam? Anger. Separate. Suicide. Bad. Death . . . . Like cancer. Nothing positive . . . . Even Cat Stevens? . . . Islam made him stop singing.” In another passage, the narrator is stopped by a cop who asks him where his name is from. The narrator—perhaps Akhtar himself—“in the trying months after 9/11 . . . settled on a prophylactic strategy: ‘India,’ [he] would say. It was a lie . . . . [But] the answer had the obvious advantage of connoting not the referents of terror, murder, and rage that most associated with Pakistan but rather the bright colors and spicy tastes of delightful dishes like tikka masala, gyrating flash mobs in Bollywood movies, and yoga pants.”

In reviewing Akhtar’s book, I’ve tried to reconcile my settled feeling about my America, even during the surreal four years of Trumpish chaos. Perhaps it’s a privilege to live in the sunny state of California’s diversity; maybe I’m fortunate to be born a Hindu; or maybe my Change Management consulting practice—which has me mixing with CEOs, COOs, CMOs, CFOs, CIOs, CISOs and CHROs—has inured me to the harsh glare of capitalism’s cloudy violence. Have the C-suite’s well-coiffed men and women blinded me to the world as it is? Perhaps I’ve just been seeing (C-ing?) it the way they want me to experience the world. While we riffed on strategic transformations, aligned organizations, reengineered processes, business-class flights, 5-star hotels, stock options, and mergers and acquisitions, I lost track of the jobs considered expendable in RIFs (Reductions in Force) justified by Wall Street valuations.

Change may be inexorable, but that does not always make it a welcome companion when it results in loss and exile. Perhaps “we’re all wondering in our different ways about how to find our way back home.”