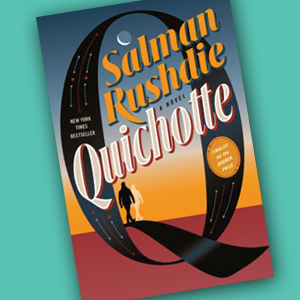 Just as Tulsidas’ Hindi made Valmiki’s Sanskrit accessible to fans of the Ramayana, Rushdie’s pop-infused vernacular has given contemporary voice to one of the best known works of Western literature. As a pastiche, Quichotte, Salman Rushdie’s latest novel, pays homage to Don Quixote, the Spanish classic by Miguel Cervantes.

It would be a failure of imagination to read Salman Rushdie’s Quichotte, shortlisted for the Man Booker Prize, as autobiography. Indeed there are passages in this rambling road-trip of a novel about the eponymous Quichotte’s quest for love, that suggest a superficial resemblance between Rushdie and the character named Brother, “a New York-based writer of Indian origin who had previously written eight modestly (un)successful spy fictions.” On a recent radio interview, I used the following sentence from Rushdie’s novel to ask him about his own roots: Brother “was not rootless, not uprooted but transplanted. Or, even better, multiply rooted, like an old banyan tree putting down ‘prop roots’ as it spread, which thickened and in time became indistinguishable from the original trunk.” (Rushdie’s radio response: “Like the character … I have multiple roots. I still think of Bombay … as my hometown … I have very deep roots in London … And I’ve now lived in New York for 20 years so I certainly feel at home there.” But Rushdie is too talented a writer to simply paste his life onto a cardboard character and call it a novel.

As for Cervantes’ Don Quixote, there are many windmills that Rushdie’s Quichotte tilts at: opioid addiction, junk culture, and the end of the (American) world.

The first windmill pulls in the protagonist Quichotte’s cousin, Dr. R. K. Smile, an Atlanta-based manufacturer and distributor of Oxycodone; Smile’s company is a Purdue-like pusher of this highly addictive drug. This doctor of pharmacy outs his ill-gained pharmaceutical finances as akin to the Indian “street corner dispensary that would hand out drugs without a doctor’s chit.” Rushdie, who for five years was a Distinguished Writer in Residence at Emory University, has a good ear for the Indian-American community in places like Atlanta. We too easily forgive the greed and corruption of the Dr. Smile-like fraudsters who live among us, even when they harm the ones we love.

Dr. Smile’s drug-dealing did harm to many, including Quichotte’s beloved Miss Salma R, an Oprah-like star transplanted to America from India. She embodies yet another social ill that Rushdie rails against: television’s junk culture. “A zillion channels and nothing to hold them together. Garbage out there, and great stuff out there, too, and they both coexist at the same level of reality, both give off the same air of authority. How’s a young person supposed to tell them apart?”

There is no easy answer to this question. But it does get to the meta-windmill for Rushdie’s readers to joust with: Trump’s embattled America that has seemingly given up on truth and has accepted disinformation as part of life. “Every show on every network tells you the same thing: based upon a true story. But that’s not true either. The true story is there’s no true story anymore.” Rushdie’s end of the world comes when “there’s no true anymore that anyone can agree on.” As a result, in the all-too-real world, tribal and racial hostilities heat up, elections feel stolen, and lives are taken, including those of innocent brown men whose beards and turbans are willfully conflated as terrorist markers.

Rushdie has written a marvelous critique of modern life using the oldest of tools: the sea of funny, sad, tragic, and hopeful stories. If you swim through his sea’s many currents, you will be rewarded with gems like this interrogation of Internet life: “Life had become a series of vanishing photographs, posted every day, gone the next. One had no story anymore. Character, narrative, history, were all dead.” It’s a sad sentiment, but it doesn’t carry the day. While the story takes a bumpy, circuitous route with Quichotte driving a beaten-up Chevy Cruze across the country, the novel ends with the hero and his Miss Salma in California, the land of redemption, of love, of hope.

Rajesh C. Oza, Ph.D., who for many years wrote Khabar’s “Satyalogue” column, is an avid reader and freelance writer. He has been reviewing books for three decades.