Books: The Other Indians of New Mexico 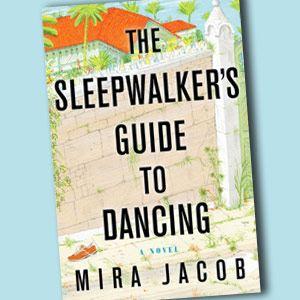 Mira Jacob’s debut novel, The Sleepwalker’s Guide to Dancing, is an homage to the ties that bind and the many ways that the angst of displacement affects our lives. Jacob, a biographer of Kenneth Cole, is married to the filmmaker Jed Rothstein. She talked to Khabar about her inspirations for the novel, childhood visits to India, and more.

It was about ten years ago that Mira Jacob began work on what became The Sleepwalker’s Guide to Dancing (Random House), a sprawling novel about family and its complexities. A few years in, her father started dying from cancer. That trauma took her away from the story for a while but when she got back to it, she found herself replacing the central character, Dr. Thomas Eapen, with her own father.

By all accounts, Eapen and his wife, Kamala, fit the boxes for a happy successful family. He is a successful surgeon in Corrales, New Mexico, and she is a fun-loving mother and wife who loves coaxing the desert soil into life. Dig deep, however, and you see that all is not well. Eapen is slowly losing his faculties to the point where he’s in danger of forsaking his job. Caught between a domineering matriarch who can never stop using guilt as a weapon and a depressed, alcoholic brother, Thomas long ago burned any connections to his family back in India. Tragedy strikes the family in America, too when Akhil, the Eapens’ teenage son, dies horrifically. In the middle of this maelstrom is Amina, the Eapens’ daughter, who is trying to carve out a life as a professional photographer in Seattle, far from her family’s New Mexico home. Amina finds she can never quite escape the pull of family even as she comes to terms with her father’s changing condition and their collective past.

Jacob throws in ample doses of humor in what might otherwise have been quite a dark tale—the extended desi “family” in New Mexico, and the second-gen’s own issues all occupy prime real estate here. What’s especially impressive is that the novel tackles weightier issues—dealing with death and the definition of home and family—deftly and with grace. “We’re a country of immigrants, and you’re the first wave. At least you’ve got an opportunity to set your own stereotype,” a classmate tells Akhil. While Sleepwalker’s Guide does veer pretty close to stereotype fairly often, it is nevertheless an entertaining and engaging read.

It took you ten years to write this book. What was the stumbling block?
Part of it was because I had been writing about a father who was leaving [us]. The mirroring of those things was just eerie and emotionally hard to handle. I pulled the novel out after he died and put my own father in. It’s not his life, his family didn’t do those things, it was just his mannerisms and the way that I could have imagined him reacting if he had gone through some of this stuff. The problem with death is that it fixes people in our mind and part of the sorrow is that you never have a new experience with them and it felt like I was really having these new experiences with him––which I’m willing to admit is probably a little bit insane, but it felt good to get through it. 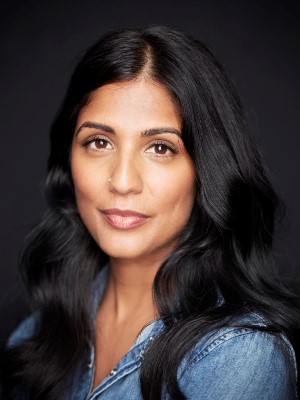 Why did you choose Alburquerque as the setting for much of the story?
I grew up in New Mexico, in Corrales. There were very few East Indians, we knew all the other ones in town. American literature right now is still very much about the East Coast Indians; it’s incredibly good and I find a lot of sustenance in it, but I find a lot of what I grew up with was completely different. We were a commodity, maybe a couple other Indians, and they weren’t even your “kind” of Indian which I always thought was hysterical, but that’s how I grew up and I wanted to write that in. Plus, I am so in love with the desert.

The concept of extended family (because there are so few Indians) really comes through. Was that the definition of “family” for you when you were growing up?
Most definitely, yes. I see now that New Mexico has become much more populated with Indians and people are separating into their own groups but when we were growing up, we would be so excited to see anybody who was Indian. When I came to New York it was really hard for me to believe that I wasn’t somehow related to or friends with every Indian I saw. I am still that person when I see Indians on television; I wave to them. It’s a ridiculous way to go through the world but that’s what happens when you grow up with three other Indians around you.

I found it very interesting just how little the family members talk to each other about the big crises in their lives. It’s not even that they don’t talk to each other, it’s just that the processes to deal with this stuff are so different. How much of it is just time and place? Have you seen things play out this way?
None of those things happened to me, but just in terms of characters and how people work in the world, I tend to find that that is how people tend to deal with tragedy. There is no way to live through grief except to live through it, and it is kind of isolating. For me, it didn’t even feel cultural as much as just human. I don’t know of a culture except maybe after-school shows on television that is made to specifically reassure children that the world is navigable; I don’t know that there are places we go to in our psyche that take on loss or understand it very well.

I found the experience of Akhil and Amina visiting India to be really funny and heartwarming. You must have visited India, too. What is it about that experience that we parents just don’t get?
Let’s just talk about India in the ’80s and the India right now. They’re completely different animals, and that to me is really striking. I took my son back two years ago; he had nowhere near the trepidation I did. But when you’re coming from the America of the ’80s, from a clean white world, with milk that comes in cartons, roads with no litter, and everything’s a highway—and then you’re in this place where there’s so much humanity. Everyone has their tropes about India—it’s poor, the slums—but I would say that far more than any of that for me was, especially coming from the desert, the crush of humanity. The idea that there are so many people, and they all need to find a way to eat, and there are so many different lives going on, it was all very foreign.

As a parent, you don’t realize the small things that can make a difference.
Yes, like the taste of the water! That was a big stumbling block for me. It was that, and also coupled with the idea, which is mind-boggling, that your parents are at home here. That was the thing that was always hard for me. I would see my mother grow younger on the plane ride over, I swear, I would just watch the years disappear and she would get there and she would be so in her element. Neither of my parents wanted to move back—they fell in love with America and the desert. But I knew there was something about it where they still felt at home and that made me feel so much more alienated, because it wasn’t just that I didn’t understand the place, but I didn’t understand the two people closest to me either.

When I was seven it was my worst trip. It was hot, I was sick for weeks, but when I brought [my son] Zakir along, it was different. His cousins are much more recognizable to him than mine were to me. They’re all watching the same TV shows, etc. The world is much smaller now. So when we were leaving he was like “’Bye India, we’ll miss you.” It was hilarious. I was like, this was not my childhood! My childhood was more “Get me back on the plane and I am ready to go back to the place where everybody thinks I look weird, [but] as long as the bathroom is dry and I can have a sweet breakfast as opposed to a savory one…I’m fine.”

Poornima Apte is a Massachusetts-based journalist and book reviewer.