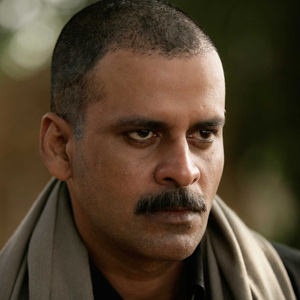 When in a room with Manoj Bajpayee, a discussion about the 1998 cult film Satya that Ram Gopal Verma directed is unavoidable. Bajpayee played a gangster— the self-proclaimed “Mumbai ka king” and the beating heart of the film, Bhiku Mhatre, and he’s tickled by the fact that fans still recreate his maniacal dance moves in the song “Sapne mein milti hai” from the film. “Satya is a culmination of the brilliance of Ram Gopal Verma and Anurag Kashyap. I wasn’t even sure that I was good as Bhiku Mhatre. The love and appreciation I got for that role still amazes me. I am truly humbled by the admiration from fans over the years,” he says. The role won Bajpayee a National Film Award in India for Best Supporting Actor and remains one of his most popular roles.

But appreciation from peers, fans, and critics did not always result in commercial success or more work for the Bihar-born actor. His has been a story of struggle. After being rejected thrice by the esteemed National School of Drama (NSD, where he teaches an acting class now), Bajpayee made his debut in Govind Nihalani’s Drohkaal where he had a minuscule part. But Bajpayee’s portrayal of the dacoit, Man Singh, in Shekhar Kapur’s 1994 biographical drama Bandit Queen caught Verma’s attention. Desperately in need of validation and success, after a few duds at the box office and even a brief stint with television, things began to fall in place for the actor when Verma offered him Satya. “I was promised the main lead in that film but then Ramu changed his mind. I was so disappointed, but then he said I’d be more suitable for Bhiku Mhatre and the rest, as they say, is cinematic history,” he says.

Box office bonanza
Though the actor speaks emotionally about his initial days as a struggler in Mumbai, Bajpayee has had quite the year in 2018. Two of the biggest commercial successes—Milap Zaveri’s hot mess, the jingoistic, vigilante- cop drama Satyamev Jayate and Ahmed Khan’s ode to Arnold Schwarzenegger’s Commando, Baaghi 2, had Bajpayee in them, playing significant characters spouting dialogues that had the cheap seats roaring with appreciation.

The actor has mentioned in previous interviews that he needs to be part of these movies so that he has some leverage with producers and distributors when pitching them films like Bhonsle or Gali Guleiyan—smaller budget films with newer directors that are not likely to make moolah at the ticket windows. But fans at the masterclass were forgiving of Bajpayee’s occasional forays into moronic masala films as long as he regaled them with roles like that of Sardar Khan in Gangs of Wasseypur and Samar Pratap Singh in E. Niwas’s Shool—films that he still gets very nostalgic about.

“I played Sardar as a sex-crazed womanizer,” he reveals to peals of laughter from a captivated audience. “Sardar was a hero who had none of the qualities of a hero—he saves no one, he’s not able to take revenge. His only focus is on sex. We are making fun of the typical Bollywood hero in this film,” he laughs. 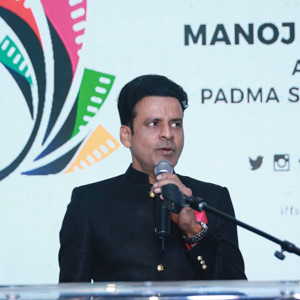 Less is more
With the hard shifting and gritty Shool, he reveals that he had to dive into his character and completely immerse himself into a world of hopelessness and anger to play Samar, an upright police officer who goes up against a corrupt political system, which was a painful process. “My inspiration for that role was Om Puri’s character in Ardh Satya. That character took me to a very dark place, emotionally. Though creatively very satisfying, I don’t think I’ll be able to do such a role again. It takes a toll on one’s health,” he says.

Immersive acting is a tool that Bajpayee has employed in films in the past: in Hansal Mehta’s 2016 biographical drama Aligarh, playing a gay professor who must deal with the hatred and judgement that follows when his private life is brutally exposed to the world, to Bhonsle, where he plays a retired constable who is caught in a conflict between the Bihari migrant community in a Mumbai chawl and local Marathi politicians and their paid goons.

“For Aligarh I went on a special diet, as I wanted my physical frame to be a certain way. There is a shot in the film where you can see my thighs: they are spindly, thin! I also learnt Marathi and studied Marathi poetry to get the professor’s state of mind,” he says. In Devashish Makhija’s Bhonsle (Makhija directed the hauntingly disturbing Ajji about an elderly lady avenging her granddaughter’s rape), he utters but six lines. “I enjoy it, the pace of it, the digging into the innumerable layers of a certain character; for me it’s the internalization of the acting process that’s most satisfying and enjoyable as an artiste,” he says.

For Bhonsle, the actor also donned the producer’s hat after the film did not get picked up for almost seven years and is working on his next project with Makhija as well. His latest outing with another young director, Abhishek Chaubey, did not pan out well: Sonchiriya, in which Bajpayee played Man Singh (again!) failed to make any noise at the box office. Bajpayee who did not have much screen time, but a well-written role, received praise from both fans and critics.

His next is Dhaka (the screenplay is by Joe Russo of Avengers fame), a Netflix film where he shares screen space with Chris Hemsworth and fellow Indian actors Randeep Hooda and Pankaj Tripathi. “I don’t think my part merits that much attention. Randeep has a much bigger role in it than me,” he signs off modestly. And the crowd laps it up adoringly.