COVID-19  In-depth info for Indians in Atlanta/Georgia. Click here
Home > Magazine > Features > Commentary: A PANDEMIC IN THE AGE OF GLOBALIZATION

Commentary: A PANDEMIC IN THE AGE OF GLOBALIZATION 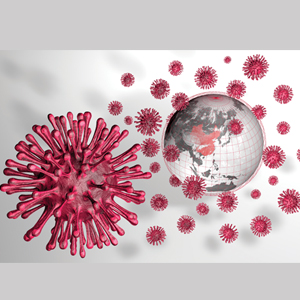 Just when we thought we understood globalization and its implications, Covid-19 struck, changing our lives in unimaginable ways. As the coronavirus disease spreads, creating a global pandemic and panic, how do we understand the implications of what we’re living through? As the author and columnist Thomas Friedman put it, our lives have been split into BC and AC: Before Coronavirus and After Coronavirus. Are we prepared for what lies ahead? And can we erase boundaries to come together and rebuild?

Many self-evident truths of globalization have been laid bare with the arrival of Covid-19—that a virus will indeed spread across borders, no matter how hard governments try to contain it; that governments still need to work globally to solve such borderless problems; that a faraway problem becomes imminent in a matter of only days; and that the line between complacence and fear is quickly breached.

What I did not anticipate, in this global and advanced age that we have become used to extolling, is how quickly a pandemic like this brings us down to our pre-global knees. When the pictures of death and isolation emerged from China, they were hard to reconcile with China’s dazzling economic and technological prowess. How could a country that had advanced so much so fast become so helpless overnight? Did we ever believe that beautiful Italy would be bereft of tourists and cafes and the daily passeggiata on the streets and in the squares? And in the U.S., our very own America, we are reeling from the virus, our heads spinning from the changing and dire predictions and stock market collapse.

And, as the rest of the world had months to prepare and had full warning through a breathless global media, why was there so little readiness, whether it was in Japan or Italy or America? Off the coast of Japan, the hapless cruise ship Diamond Princess was held hostage, as the virus spread with rapidity to infect a large percentage of passengers and the Japanese did some ineffectual testing. The quarantine was a colossal failure, spreading the virus in close quarters much more effectively. To make matters worse, those passengers who had spent 14 days and tested negative were allowed out to board buses and taxis into Yokohama city, where, because the virus reveals itself at different times depending on the date infected, they proceeded to infect others.

Initial travel bans were unsuccessful for the same kinds of reasons. Travelers could circumvent bans by going first to countries that accepted them and thence to countries on the banned list. Thermal screenings at airports did not work as claimed because passengers could easily bring down fevers by taking fever reducers before disembarkation. And yet, many countries persisted with these measures. As events quickly overwhelmed the world, governments grasped at straws—anything that could pass as “doing something,” even when common sense indicated that it would not work.

Which brings me to another incredulous question: If I, a lay person, could sit on my living room couch and poke rational holes into these vaunted measures in minutes, why didn’t the greatest experts in the world’s so-called greatest countries do so? And here in our own backyard, while the CDC’s work is generally admired, how could they have been caught so flat-footed? No testing kits ready, no additional hospital beds anticipated, no masks and gloves available— a botched beginning that allowed the virus to spread undetected and without a plan of containment. A ten billion dollar budget a year clearly must bring in more in terms of preparedness—after all, this is their only job. This was an unacceptable lapse.

Soon it became evident that no one really knew anything, and this includes the global health experts, statisticians and politicians. While some are stressing the unprecedented seriousness of the pandemic and its fatal consequences, others are concluding that it is no more serious than the flu, when everyone who has coronavirus is accounted for in the calculations. Some countries are testing and reporting large numbers of cases, and others suspiciously few. For instance, who believes that India only has 125? Dealing with such suspect data, WhatsApp jokes initially abounded about how coronavirus is no match for India’s own indigenous viruses, and therefore dies on India’s shores. Or, that Indians, used to dealing with such health challenges, are uniquely immune from coronavirus. In general, many of the world’s finest experts were reduced to repeating, in an almost-comic loop, that the greatest precaution was just to wash one’s hands with soap and water for twenty seconds.

But the passage of just days brought about a much darker turn, as in India the jokes abated and the threat became real, and in the U.S. talk turned to flattening a curve that seemed set to climb steeply and rapidly, taking untold numbers of lives with it. As Trump’s team of experts addressed the nation every day with updates using newly available data and a larger variety of models, the stock market sank and climbed on scientific data and statistical models that were contradictory, discordant and inconclusive, and the president’s own careless or more considered words. The market rout continues, and the first of massive layoffs and furloughs have begun, instilling a widespread fear and bringing to the fore questions of how many will perish in penury in a recession or depression that is becoming frighteningly real. Our recent past, our normal, even our last fortnight, seems now a mirage.

The pandemic has also brought about a certain brutal equality and irony of exclusion. While the developing world has been used to being excluded by different levels of travel restrictions from the developed world, the developed world is not used to it. So, when flights from China were first banned from arriving into many countries, the world accepted it. But when flights from Italy started to be banned, Italians were surprised at such exclusions. Now, flights from the U.S. have been banned by countries like Argentina and Ghana. How quickly the old order has changed and how exposed lie the old global hegemons, the U.S. and Europe.

I won’t bother to give my predictions on how this plays out—as of mid-March, there are already plenty to choose from. Some models rely on increased testing to gain a sense of the true morbidity of the virus, while others are extrapolating from other countries’ experiences, which may or may not translate to other settings. Some predict millions will die, while others are starting to claim that the final numbers may be equal to or lesser than the common flu. We are a country and a world terrified and obsessed with what may or may not come. Around us are the shambles of globalization— companies on their knees, universities speeding to exclusively remote learning without proper training or widespread access, once-formidable airlines grounded, borders newly erected, trillions of dollars lost, and our global quality of life in the greatest of threats.