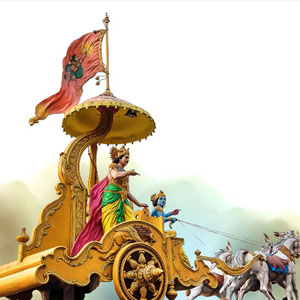 One of humanity’s most revered sacred scriptures, the Bhagavad Gita, while sprouting from the fount of Hinduism is, in its essence, a timeless and universal guide that is more spiritual science than religious dogma. Vedantic scholar BHAGIRATH MAJMUDAR offers his insights on the some of the Gita’s most salient teachings.

Last month, December of 2020, had a date that was even more significant than usual: not only was December 25 the birth anniversary of Jesus Christ, but also Gita Jayanti—the birth anniversary of the sacred Bhagavad Gita, which, in a rare coincidence, also fell on this day as per the lunar calendar. On this fortuitous occasion, I was inspired to once again plunge into the ocean of learning that Gita is, to see if I could highlight some of its most precious teachings.

The Gita will expand your spiritual horizons regardless of whether you are Hindu or not—because it is not a religious text but a book of spiritual science. It carries no dogma, prescribes no commandments, claims no rigid authority, and contains no erudite expressions—just simple explanations about our complex life! Only true and profound knowledge can make the ultimate truth so simple.

There are many people—young and old, from India and abroad, together with hundreds of intellectual giants, past and present, from all parts of the world—who have been stimulated and inspired by the Gita. The message of the book is not engraved in stone but is open to interpretations— the vents and ventilations of fresh  thought—from anywhere. Many distinguished philosophers, scientists, academicians, and thinkers have added and expanded their thoughts after a devoted study of the book. They include Albert Einstein, Albert Schweitzer, Ralph Waldo Emerson, Barbara Stoler Miller, Mahatma Gandhi, Henry David Thoreau, and countless others. Thoreau took the Bhagavad Gita with him to Walden pond in Massachusetts during his secluded study there in the years from 1845 to 1847. Of this experience, he said, “The pure Walden water mingled with the sacred water of the Ganges.”

Wisdom inherent in the Gita 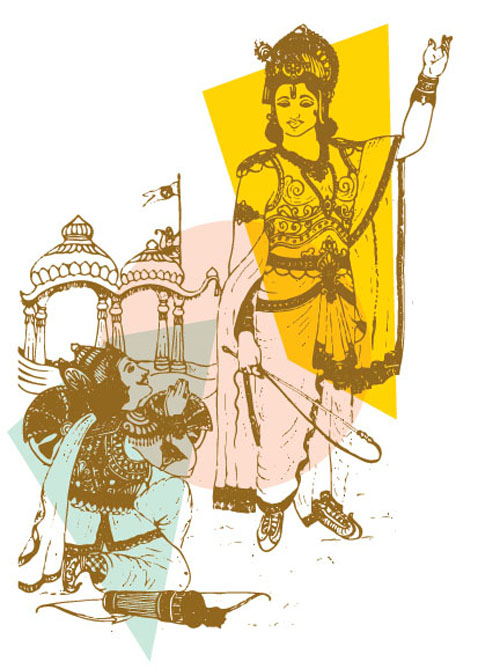 It is not possible to fully expand on all the pearls of wisdom contained in the Bhagavad Gita, but I thought it would be profitable for our young people and those who are unfamiliar with this scripture to preview some of the salient features of its timeless wisdom.

Bhagavad Gita means “The Song of God.” It carves out a central core of the great epic, the Mahabharata. It is primarily expressed as a dialogue between Arjun, a great warrior drowned in depression but also inquisitive about delving deeper in the truths of life, and his spiritual mentor, Shri Krishna. It exemplifies an ideal relationship between a teacher and his taught. Arjun challenges his mentor from time to time and dares to disagree with him when his answers are not satisfactory. Krishna reciprocally resolves his doubts based on his supreme and insightful knowledge without losing his composure. Many of Arjun’s questions are timeless and therefore, extremely relevant for all times.

These great teachings were not delivered in a temple, mountain top, before a large crowd, or in a private session. The site was an open field of action—a battlefield in this instance—where Shri Krishna addressed Arjun. Sanjaya, king Dhritarashtra’s advisor who had the gift of clairvoyance, relayed the event to Dhritarashtra. Although only Arjun profited from it at that time, the legacy continues to benefit mankind through the millennia. Needless to say, but vital to remember, that mere recitation or memorization of the Gita is like buying medicine and not consuming it. No consumption, no cure!

The scope of the Gita is quite broad. Following are just some of the many age-old issues that humans have contended with that the scripture sheds light on:

• The wisdom and warnings when we get engaged in any action.

• The relationships between thought and action.

• The science of attachment and detachment.

• The nature of the universe that surrounds us; the pertinent question, “Is there anything beyond in the cosmos?”

• The psychological composition of human beings; their virtues and limitations.

• How to understand and circumvent our thwarted growth pattern?

Points to ponder from selected quotes of the Bhagavad Gita

Here are a few selected quotes from the Bhagavad Gita to provide an opportunity to the readers for a moment of self-reflection:

• Set thy heart upon thy work but never its reward.

• All works are being done by the energy and power of nature. But due to the delusion of their ego, people assume themselves to be the doer.

• For him who has no concentration, there is no tranquility.

• Blessed is the human birth: even the dwellers in heaven desire this birth; for true knowledge and pure love may be attained only by a human being.

• The self is one’s friend as well as one’s enemy.

• Man is made by his belief. As he believes, so he is.

• In this world three gates lead to hell: the gates of passion, anger, and greed.

• Body is an apparel to the soul. When the soul changes the body, it is called Death. The next apparel is waiting to be worn (rebirth).

• A repetitive thinking creates a fixation on an object. Fixation generates attachment, attachment creates expectations, unfulfilled expectations lead to anger, anger to delusions, delusions to loss of memory and disorientation which lead to self-destruction.

• Calmness, gentleness, silence, self-restraint, and purity: these are the disciplines of the mind.

• Following are some of the revelations Krishna makes to Arjun:

o “I am present in every creature.”

o “I am the beginning, middle, and end of creation.”

o “He who sees me everywhere, and sees everything in me, I am not lost to him, nor is he lost to me.”

Learning from the Gita: A panacea in the pandemic

Perpetual and ceaseless demands encroaching on our time may not permit a complete study of Bhagavad Gita, but these points, if pondered on, may navigate our life by serving as a beacon when we are in the midst of an ocean in a dark night. We all are in an analogous situation in the current crisis of a pandemic period. Krishna offers an all-time remedy: “Sanghe shakti kalau yuge” (Union is strength).

Dr. Bhagirath Majmudar, an Emeritus Professor of Pathology and Obstetrics-Gynecology, Emory University, Atlanta, Georgia, is also a Sanskrit Visharada and Jagannath scholar, the highest academic honor in Sanskrit. As a Hindu priest, he has conducted about 400 weddings, many of them interfaith. He is a poet, philosopher, Vedantist, actor, and playwright. He can be reached at: bmajmud1962@gmail.com.