Commentary: Is This America? 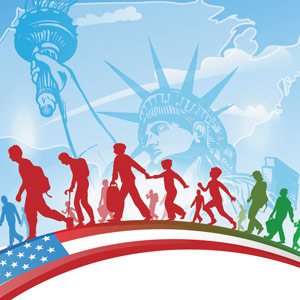 Green Card holders, and even perhaps naturalized Citizens, are no longer safe from the overarching assault on immigrants that the Trump administration has unleashed.

Imagine you are a green card holder traveling frequently between the U.S. and your native country. Perhaps you seek cheaper medical treatment in your native country and return for medical visits. Or perhaps you are elderly and have relatives still living in your birth country, but the travel exhausts you, so you stay overseas for longer periods of time. But you’ve traveled this way without incident for years.

On one routine trip back, you arrive at the passport counter and an official from Customs and Border Patrol (CBP) tells you to follow him to a holding area in another part of the airport. You are instructed to hand over your immigration documents. You are prohibited from using your cell phone to inform family members that, at the very least, you will be a late arrival. You are prohibited from talking to the other people in the room. You are denied food and water.

You have lived in the U.S. nearly your entire adult life and paid taxes for decades.

You have contributed to the U.S. with your labor.

Past administrations, both Republican and Democrat, have enforced this rule more leniently, particularly where a green card holder has shown an ongoing and routine pattern of travel. But the current administration enforces this rule with greater rigidity, and, taken with this administration’s wholesale assault on immigrants, the effect is to further erode the norms of life in our country and to intimidate immigrants—both new and old.

This practice of holding green card holders in a room in the airport without access to an attorney or family member is considered a “secondary inspection,” not a detention, and therefore no constitutional protections attach. But the experience for the green card holders is clearly stressful and often traumatizing.

Reshma Shamasunder of Advancing Justice in L.A., the largest legal/civil rights organization for Asian/Pacific Island/Native Hawaiian communities, confirms the uptick in green card-related holdings. According to Shamasunder, the current administration may be “trying to see if people who have green cards may be reconsidered as public charge.” By this, Shamasunder indicates that the administration may be using secondary inspections as opportunities to examine their use of public benefits. Her organization, as well as the Asian Law Caucus and other Asian American/Pacific Islander organizations are particularly interested in hearing of green card holders’ experiences with CBP, as CBP provides no data on secondary inspections and release.

How can our community of green-card-holding Indians protect themselves? According to immigration attorney Nadia Yakoob, green card holders who travel frequently between their birth country and the U.S. should consider naturalization to obtain U.S. citizenship. The process takes about a year and requires fingerprinting and an interview that includes questions about various aspects of American civics. Yakoob, who has nearly two decades of experience in immigration law, recommends applying for a U.S. passport immediately following naturalization. And for those who are taken under “secondary inspection” by CBP, Yakoob recommends remaining calm and cooperative. If an officer believes there is a problem, the green card holder is usually allowed to enter the U.S. and told to visit the closest CBP office to establish residence. If CBP initiates removal proceedings, the green card holder will be required to appear before an immigration judge.

In addition to losing one’s right to stay in the U.S. for long periods of time as a green card holder, those who lose their status for failure to maintain their permanent residence in the U.S. by returning to their native countries may lose their Medicare eligibility and even Social Security funds. Yakoob recommends that green card holders weighing this decision consult with an immigration attorney and tax/finance specialists.

Some may argue that these “secondary inspections” make sense; that the rules are in the books for a reason and should be enforced. But such thinking denies the more pernicious nature of such detentions—to make green card holders and other immigrants who live and work in the U.S. feel like their status is provisional and subject to change. We have already seen evidence of this shift in this administration’s permissive and even inflammatory attitude toward violence and harassment directed toward immigrants in the past two years. A study by the Center for Study of Hate and Extremism, corroborated by the NAACP, indicates that hate crimes in America’s ten largest cities amounted to the highest total in over a decade. Rather than embracing the spirit of those words inscribed on the Statute of Liberty—“give me your tired, your poor, your huddled masses yearning to breathe free,” we have wrested those huddled masses from their children and detained them in far-flung and isolated privatized prisons. Further, the President’s Executive Order 13767 established a higher standard for establishing key factors in obtaining asylum, including ending asylum for victims of domestic violence and gang violence. According to a report by the Pew Research Center, in 2017, the U.S. resettled fewer refugees than any other country in the world.

Yale professor Jason Stanley warned in a New York Times Opinion piece that the U.S. is tilting closer toward fascism and that normalizing the behavior of the current President is exactly what we must not do. Indeed, in the past two years, we have come to normalize the impetuous, ranting tweets of this President. And perhaps our own coping mechanisms require us to normalize what would seem utterly wrong just two years ago—we confront our own fragility in the specter of power, shrug our shoulders, and try to carry on with platitudes extolling a more positive mindset.

First green card holders. But then who? Reports indicate that naturalized citizens are next on the list. And recent news reports indicate that this President is currently considering an Executive Order that would entirely eliminate U.S. citizenship for children born to immigrants.

Further, while naturalization seems like a logical option, such a decision negates the importance of this change in policy with respect to green card holders and a shift in immigration norms. That green card holders could retain their national citizenship even as they lived and paid taxes and raised children here underscores America’s freedom of identity, and an implicit understanding that many of us straddle two or more cultures.

We must remind ourselves that this is not normal. We must vote against a political party that rubber-stamps such xenophobic policies. This is not the country that embraced my parents in the 1970s. This is not the country that welcomes immigrants seeking relief from autocracies and violent regimes. I have often arrived back to the U.S. from foreign travels with a sense of gratitude and welcome when I arrive at U.S. Customs. Now, I feel uneasy. And I am a U.S.-born American citizen. So if I feel this way, how must those without such protections feel?

Samantha Rajaram is a mother, community college professor of English, writer, and attorney. She lives in the Bay Area. This article first appeared in India Currents magazine.