Commentary: Political Apathy Is No Solution 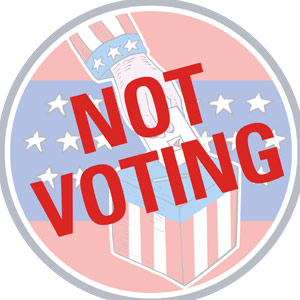 Indian immigrants came to the U.S. to advance economically, so they don’t like to rock the boat. Besides, their priorities when they were growing up might have made them less politically inclined as adults. But their kids here are different, says MIRA SYDOW, and she thinks that, for a change, the parents could learn something from the kids about activism.

“You know, Indians couldn’t care less about politics,” my grandmother says. She’s sitting on the side of my bed flipping through one of the dozens of magazines littering my bedroom. My grandfather, a proud South Indian, can’t help but voice his agreement. He was in his 60s before he started engaging in politics, mostly because of my mother’s incessant badgering. It’s not unusual; according to a study by Pew Research Center, his generation is less politically active than later ones. However, it is unusual that he cites being Indian as an excuse for not being politically active. I can’t blame him entirely. When he was coming of age in Hyderabad, people in America were experiencing the counterculture and civil rights movements, and he was scraping together the funds to leave India. Becoming active in a new system of government was the last thing on his mind. A flood of immigrants subscribing to this belief has led to an epidemic of political apathy among minorities, especially Indians.

A week after my grandfather mentions his concern about Indian-American voters, I’m sitting on the ground in the drop-off lane of my old elementary school after a long run. A few of my teammates are sprawled around me in various stages of stretching, and their chatter hums in the background of my thoughts. The upcoming midterm elections spur a discussion on political participation. As the conversation progresses, I tune in to phrases like “I’m just one of those typical, non-voting Asians” and “We don’t think politics really affects us.” Their comments aren’t ignorant; they’re the opposite. It hadn’t occurred to me that Asian-Americans, especially people my age, were aware of their political apathy.

After combing through voter statistics, it makes sense. Asians have the second lowest voter turnout with only Hispanics reaching lower percentages. Asians, on the other hand, have the highest median household income in the United States. Indian Americans, in particular, have the highest median household income overall. There’s no doubt that they have a high level of education and sufficient transportation to vote in elections, so why don’t they?

There really isn’t a good reason.

The excuses, rather, vary with each election, but none of them are concrete. In the 2016 presidential election, the logic seemed to be along the lines of “Neither candidate hates us, so we just won’t vote.” Sometimes, political participation requires selflessness, the willing to vote for the safety of another minority group. Although we all have unique ethnic differences, we’re all Americans and should vote to support that fact.

While some of my friends remain blissfully unaware of our political situation, most Indian teenagers are more politically inclined than their parents. The generation of immigrants before us shies away from anything that could get them in political hot water. However, their children are less wary. As a student at Northview High School, it’s virtually impossible to organize political events like the Walk-Out without the help of our 50 percent Asian population. These Indian students can’t vote yet, but they’re rallying behind causes that are close to their hearts.

Already, I see the tide beginning to turn. A week ago, I attended a few events promoting Democrats running for the Georgia General Assembly. These small, state-level elections don’t usually garner much support from the politically inactive Asian-Americans, but this time the room was packed with elderly East Asians and Indians: Indian university professors, stay-at-home moms, and company executives who lounged among the familiar upper-middle class white families.

Change is coming, ever so slowly, and Indian Americans have the power to be at the forefront of the political situation in the United States.

Mira Sydow, a junior at Northview High School in Johns Creek, GA, is a photographer and the managing design editor at The Messenger, her school’s student-run newspaper.